And the Magical Mist 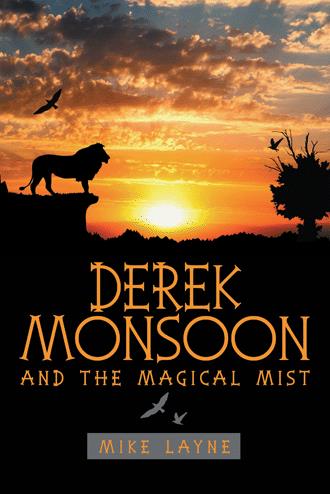 Derek was suddenly back in the jungle. His breathing heavy and labored. He had been running from something. The cool air turned his breath to steam as it left his lips. He took a knee and scanned his surroundings. He took note of the morning sun peeking through the dense jungle. The beams of light cutting diagonally through the trees and gently landing on the under foliage. Sparse segments of ground were spattered with light.
He was acutely aware of everything around him. The light. The bright colors of the forestry. The sounds of insects buzzing. Birds flittering from branch to branch. The dank smell of wildlife.
He heard footsteps behind him. Padded feet moving slowly. Barely audible. He didn’t understand how he could hear them. He took a knee and faced the sounds. The huge lion appeared out of nowhere. It stood on the trail baring its teeth and growling. Steam rising from its nostrils as it took deep breaths and slowly let them out.
Derek felt no fear. He was calm. He felt like he belonged. This was his territory. His jungle.
The lion attacked furiously. Derek rose quickly and attacked as well. He rushed the lion and met it head on at full speed. He expected to be knocked backward. He wasn’t. The lion hit him full force right in the chest, yet he was the one standing. Feeling powerful. Stronger than ever. A feeling that he had never known. This was his jungle.
Then darkness!
Then silence!

Derek Monsoon is the quiet teenage son of a well-respected pediatrician and one of the world’s most foremost heart surgeons, a workaholic born and raised in in a small African village in the Democratic Republic of Congo. When his father plans a trip for him to the Congo with a group of other kids, Derek thinks he is just trying to get rid of him for a few weeks. But as he heads to Africa, Derek has no idea of the adventure that lies ahead.

Derek and his young travel companions have nothing in common. When they arrive in the Congo, their mystical powers are unveiled, helping them to develop their strengths and ultimately become part of a legend necessary to save the Virunga National Park from poachers. As the teens face danger and death, they bond through their many challenges while risking their lives to save each other. Now opportunity and the truth await Derek. Will he grow into the powerful leader he was born to be and claim his true destiny?

In this entertaining fantasy adventure, a teenager travels from America to the Congo where he and his travel companions must use their newly-discovered powers to save a national park from poachers.

Mike Layne enjoys reading, writing, telling stories, and spending time outdoors. He was raised in Idaho and now resides in Utah. Derek Monsoon and the Magical Mist is his debut novel.