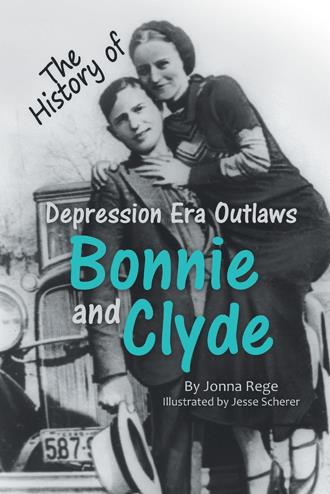 By the end of 1929, America was plunged into a very dark time. This time came to be called the Great Depression.

By 1933, half of all banks had closed. Some people lost everything. Almost one-third of the country needed jobs.

The economy was so bad that companies couldn’t hire people.

Poverty was already a problem in our country. Now, it became widespread. People were poor and hungry.

They began to lose hope as the Depression lasted for ten years.

These conditions set the stage for Bonnie and Clyde.

Bonnie and Clyde met on January 5, 1930, when she was 19 and he was 20. They liked each other and began dating. The rest is history. In Bonnie and Clyde, author Jonna Rege tells the story of Depression era outlaws Bonnie Parker and Clyde Barrow. You will get to follow their crazy two-year crime spree.

This nonfiction book for young readers investigates Bonnie and Clyde’s histories, starting in their childhoods. You will get a peek into the Great Depression, and how life was different in the 1930s. First in the Depression Era Outlaws series, Bonnie and Clyde shares the tale of the short, troubled lives of these American icons.

Jonna Rege was a teacher for fourteen years, and she has taught many children to read. She currently lives in Santa Rosa, California.