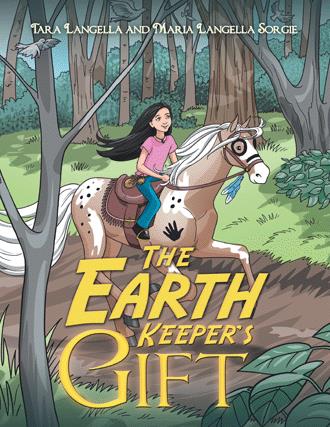 Nimue loved riding her painted pony Cloud. She knew she only had an hour before the school bus arrived so she saddled up quickly and headed out for the trails. Cloud picked up his step as they entered the wood. He loved adventure. "Easy boy," spoke Nimue softly as she sat up in the saddle. "I know, I'm excited too." She patted the pony softly on his neck.

Nimue had a special way with animals. The pony settled at her soft touch. As they rode on, Nimue did not stop talking, to the pony, to the birds, to the trees, and all living things. An only child, who walked with a limp, this was her world. Riding her pony made her feel strong. The real world was not kind to her. Children teased her because she talked to animals and trees and walked different from them. Her parents scolded her for believing in magic and what they termed a fantasy world.

Nimue has a special way with animals, especially her pony, Cloud, who always settles with her soft touch. As she rides, she talks to Cloud, to the birds, to the trees, and all the living things. An only child who walks with a limp, riding her pony makes her feel strong when the real world isn't kind to her. Children tease her because she talks to animals and trees and walks differently than them. Her parents scold her for believing in magic and what they deem a fantasy world.

This book for young adults follows Nimue as she seeks to unlock the Earth Keeper's Gift and encounters a magical world filled with talking animals, talking plants, and adventure. She seeks a place where she is loved and heard and where she can dream and hope again.

In The Earth Keeper's Gift, authors and sisters Tara Langella and Maria Langella Sorgie share a story of one girl's journey of self-discovery.

Tara Langella is an herbal educator who has studied with Robin Rose Bennett and is a graduate of David Winston's Center of Herbal Studies. She is also a professional voiceover artist and member of the Screen Actors Guild and the American Federation of Television and Radio Actors.

Maria Langella Sorgie is a freelance writer, equine practitioner, and runs her own company, The Healthy Horse.