Killing for Power and Profit 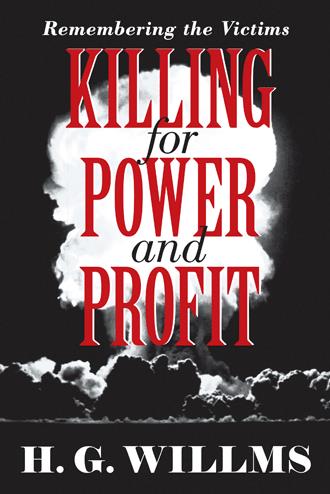 When I sit in the waiting room of a VA medical facility, I see fellow veterans who have served in America's wars, past and present. They are veterans of wars in Korea, Vietnam, Iraq, Bosnia, Afghanistan, and elsewhere. There are vets in wheelchairs and on crutches. Others push walkers. Some are missing an arm or a leg. Many have never recovered from the carnage of wars. Some suffer from emotional illnesses. The healthcare professionals who work in the VA hospitals and clinics are angels of mercy who care for veterans every day. They are overwhelmed by the numbers of men and women who need their help. Politicians talk about their support for vets, but the current level of funding for the VA is not nearly enough. Killing for Power and Profit has been written for a wide audience of readers. It is meant to cover a period of more than 100 years leading up to the present day with short chapters and a minimum of detail. Remembering what the human race has done in the past can lead to a better understanding of the present day and the future. There is reason for optimism today and reason for hope. When someone reaches the end of this narrative, he or she can also see some hopeful signs and progress on the part of the human race. It isn't easy to make decisions based on reason and common sense, but many men and women, young and old, are up to the challenge.

King Leopold II of Belgium built palaces, public buildings, castles, and monuments to remember his greatness as a king. People still praise him even though he killed millions of people.

The question of accountability is raised, not only in the case of Leopold, but all in power who have caused the death of millions of human beings. The terrible wars of the recent past have all been followed with excuses by those who planned the wars.

In this military and political history and commentary, the author--a U.S. Army veteran--covers more than one hundred years leading up to the present day. In addition to Leopold II, he highlights figures such as Otto von Bismarck, the chancellor of Prussia who united Germany; Japanese Emperor Hirohito; Adolf Hitler; President Franklin D. Roosevelt; President Lyndon B. Johnson; and many others.

From the rise of colonial empires to World War I and World War II to fighting in Korea, Vietnam, and beyond, we must study the past to determine what we might do better moving forward.

Learn the fascinating history of the Western world's major conflicts and gain an appreciation for those who've fought and died in Killing for Power and Profit.

H. G. Willms, a bookstore owner, library administrator, and avid reader, is a U.S. Army veteran. He is eighty-five years old and lives in Tucson, Arizona.