Woman in the Pin-Striped Suit 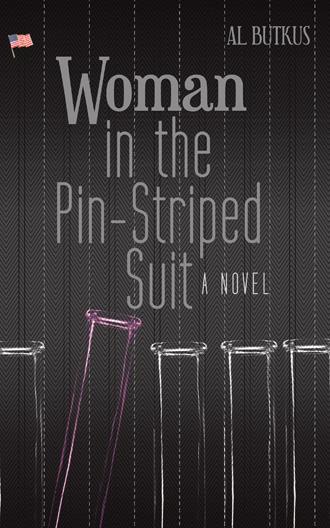 Like an LP record stuck on one or two notes, John Hoffmann's words kept repeating in her head, "You're a woman in a man's world. There's no way you can succeed. Get used to it." All she could think was, Like hell I will!
The tiny taillights turned off Highway 71 then suddenly disappeared. Cynthia was about to panic when she realized the road ahead rose over a hill. She sped up as if willing the taillights to pop into view. They did. And quickly. The VW Bug was at the bottom of the other
side of the hill, parked at the lake's icy edge. Cynthia applied the brakes and stopped her oversize car within a few yards of the VW's taillights. Her car's headlights lit up the inside of the Bug. She could see John Hoffmann sitting behind the wheel. She could see he was looking at her in his rearview mirror. She could see he was smiling his little smug
smile.
More than anything, Cynthia wanted to "punch his lights out," as guys in bars often said after a few drinks. Instead, she stepped on the gas pedal.

A chemist mysteriously drowns in an Iowa resort lake. Months later, his lawyer daughter is shot in a Kansas City hotel. These could be coincidences--or not. It's all part of a power play, a race to acquire a certain formula that will yield the biggest fortune in the coming years. The chemist's secret is a prize, and greedy money men and a powerful politician want it more.

The call for justice is answered by a tightly knit group of battle-seasoned veterans under the unlikely leadership of Cable Wheeler. He's unlikely considering he knows nothing about police work or investigating crimes. He's a former Wall Street accountant and coast guard rescue swimmer, but he's now embroiled in a patent battle that ended in murder.

Despite his inexperience, Cable proves worthy time and time again in this bloody business. To save lives, he takes three of the dead chemist's remaining children on a whirlwind cross-country game of hide-and-seek, dodging villains as they go while trying to put a stop to those who would do anything for money. Cable is just trying to do the right thing, but it could get him killed.

Al Butkus is a former journalist for Time and Forbes magazines and California newspapers. He is a Penn State journalism graduate and holds a master's from the University of Pennsylvania. He is an adjunct communications professor at the University of Missouri in Kansas City. Woman in the Pinstriped Suit is his first novel.