A Touch of Genius

A Hopeful Guide to Parenting a Child with Asperger’s 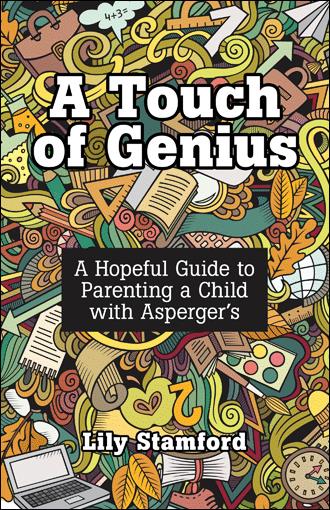 I felt my phone buzz in my pocket, and when I picked it up to see Michael’s name on the screen I prepared myself for the worst. This is one of the habits you develop when your child has Asperger’s Syndrome. You become constantly available, and you become constantly prepared to manage disaster. One day earlier I had sent my son off on a plane alone from Boston to San Francisco for an interview with Apple. He had graduated from an Ivy League school a few months prior, but the transition between school and job searching had been uncertain until this series of interviews. I was trying to prepare myself—in all the ways I had learned over the last two decades—to find patience, to process disappointment, and to rebuild a broken Michael. I answered the call.

“Mom, I got the job, and it wasn’t even the job I applied for. They offered me a better one.”

To use words like pride, or love, or even relief still feel like an understatement. What words exist to express summiting a mountain you’ve been climbing for more than twenty years? How can I talk about achievement without first explaining how difficult life had been for us? Michael had overcome the low expectations teachers and peers had too often held for him throughout his life, and he had surpassed the odds recited to us by even the most optimistic doctors. He had found solutions to his own challenges, and with this news, he had even surpassed his own belief in himself.

Twenty years ago I sat in a chair in a doctor’s office, my own clammy hands fidgeting while waiting for the diagnosis: yes or no.

“Your son may never learn to drive,” the doctor had said, “and he may never go to college.”

Today, my son Michael is a Data Scientist at Apple. He has been there for two and a half years. He lives on his own in a city across the country from his father and me. He excels at his job. He loves his life. This boy is one in a million. What prompts me to write this book, however, is the number of children like Michael out there who might never be able to realize their own capacity. Asperger’s Syndrome, along with every place along the autism spectrum, poses a unique set of challenges. It comes with the burden of public bias and misunderstanding, of stereotyping and judgment, but it also comes with an extraordinary mind and with quirky and refreshing perspectives on the world. With a strong support system, students with Asperger’s can and do excel.

Resources for Autism Spectrum Disorder and for Asperger’s Syndrome are not as scarce as they were twenty years ago, but they certainly aren’t as easy to access as they should be. I hope this book might fill some of the gaps. Every autism diagnosis is different. Michael’s story will not be your child’s story. Each child on the spectrum is different in terms of skills, ambitions, thoughts, and dreams. Many will not attend college or mainstream school. You and I will not parent in the same way. We will, however, share the burden of unexpected challenges and the rush of unexpected joys.

Any parent with a child on the autism spectrum has been through the disappointment of accepting a new and different reality other than the one they had hoped for. Few, however, have been told of all the possibilities they have to look forward to. Parents have read lists, they have ticked off boxes, they have willed themselves to acknowledge the telltale signs of autism which in and of themselves are drenched in stigma: worse than normal eye contact, poor social skills, fewer friends, odd mannerisms, the list goes on. The diagnosis stage is filled with explanations of how your child will suffer more than a neurotypical child. What’s too often missing in this stage is the other half of whom your child may become. What I am focused on here is the positive side of the story, the opportunity for your child to reach their potential.

I want parents to understand that these children are special, and that often they are geniuses. They are the Bill Gates, Steve Jobs, Wozniaks, and Zuckerbergs. They are the top doctors, lawyers, surgeons, accountants, actors, and money managers. These kids who perseverate, who raise their voices, who walk with a different gait, who speak with an odd lilt—they are the ones who will change the world.

A Touch of Genius is a hopeful and practical guide to parenting a child on the autism spectrum—one that dives straight to the heart of education and success. Lily Stamford, an author, motivational speaker, and advocate for autism, shares her firsthand account of raising a son diagnosed with Asperger’s syndrome, recalling the path she and her family walked through his childhood, youth, and adulthood. Along the way, she seeks to answer tough questions about students on the autism spectrum, including: • Why do so few students on the autism spectrum graduate from college? • Why are so many public resources for children on the spectrum so difficult to find? • What can we do to help every student on the spectrum achieve their goals? • What lessons can parents of students on the spectrum learn from others who have walked in their shoes? Stamford answers these questions and more as she instills hope in what is too often portrayed as a bleak future. If you are looking to help your children achieve success, then this is the perfect book.

Lily Stamford is an author, motivational speaker, and autism advocate. She began her career as an assistant professor at a local business college. Lily graduated from an Ivy League school and received her MBA as well as a doctorate in business administration.
Lily started a business that enables her to advocate for parents whose kids are over the age of sixteen and preparing to go to college or alternative programs. Currently, advocates are mainly focused on students through high school; after high school and in college, students are typically left to fend for their needs on their own. Parents have some power to help, but colleges often do not want their involvement. What is needed are organizations that advise parents and children on topics such as choosing the best school and tailor a plan to help them be successful in school and during their transition to the working world. Lily’s vision is to see every student on the spectrum successfully achieve his or her goals and become his or her best self.
Lily Stamford can be reached at lilystamford1@gmail.com.