Moore Than She Expected

Love and Sex on the Las Vegas Strip 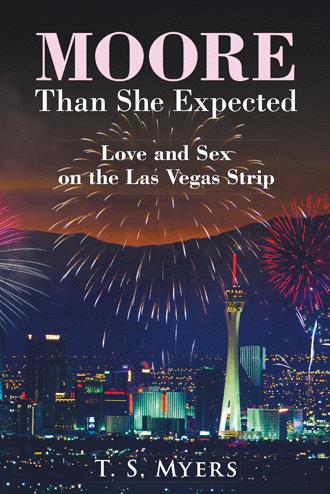 The couple had met at an all-night diner just off the Las Vegas strip. Joan had been tucked away in a back booth, immersed in her work. Like many beautiful women, she was much more striking than she would ever know. At five feet eight, with smoky green eyes, alabaster skin, and chestnut-brown hair that fell just past her waist in soft, easy waves, she was a true classic beauty. The only reason she wasn’t constantly mistaken for being a supermodel was that she wasn’t rail thin, and that had suited her just fine. More often than not, she felt like her self-confidence was nothing more than a well-crafted illusion, but her relationship with food had never been the issue.

Joan was one of those rare creatures: the kind of woman that other women admired and wanted for a friend. But on the flip side, men longed to be in her company as well, and if the number of times that both men and women flirted with her was any indication, it wasn’t just because she was smart and funny.

The moment that Thomas had walked through the front door of the diner that night, Joan happened to be looking up from her computer. She heard herself gasp as his mere presence seemed to overshadow everyone else. It wasn’t just that he was handsome but also the way he carried himself. He had an ease and an air of authority that she found almost intoxicating, even from across the room.

Thomas Moore wasn’t particularly tall; in fact, he stood just a touch above six feet. Reflecting his daily workout of choice, he had the taut body of a world-class swimmer. His hair was sandy blond, his eyes an icy blue, and when he smiled, he looked at least ten years younger than his forty-two years. In fact, he had the look of an aging surfer instead of the respected and feared businessman that he truly was.

Joan turned her attention back to her computer, deciding it was best to stop acting like the fawning teenager who was staring at the visiting pop star. Before long, she was once again immersed in her work.

Suddenly, she was jolted back to reality when she heard a voice ask, “Excuse me, but I was just wondering what you’re working on.”

She looked up and was startled to realize that the question had come from Thomas Moore himself.

“I’m sorry,” he apologized. “I was just wondering what could be so important that you would want to work this intently so late on a Friday night, especially in Las Vegas.”

“It’s only ten thirty,” she replied.

“That’s one way of looking at it,” he said as he lightly chuckled.

“And how is any of this your business?” Joan asked defensively.

“By me,” she said coyly, “or by my work habits? And how do you know I’m working and not just playing on my computer?”

“I asked your friend, Millie,” he said as he pointed toward the nearby waitress. “She’s not very discreet, you know, but then again, I guess it’s not in her job description.”

“Well,” he played along, “I guess the waitress rules of conduct aren’t the same as a doctor or a priest.”

“No, I guess they’re not. And truth be told, Millie’s always been a sucker for a smooth-talking pretty boy.”

“So now I’m a pretty boy,” Thomas said with a laugh.

“I think we’re getting a little off track here,” he said.

“Really,” Joan countered. “So now we have a track?”

“You’re quick. I’ll give you that,” he said as he slid into the opposite side of the booth. “But you do realize that you haven’t actually answered my original question.”

“Paperwork? That’s kind of a vague answer, isn’t it?”

“It’s the only answer I have.”

“Okay, I’ll be more specific. What business are you in?”

“Now I get it,” he said. “Real estate is endless paperwork.”

“Well, it’ll still be there tomorrow, you know. So what do you say we get out of here?” he asked.

“Are you crazy? Of course it’s a good idea.”

“I beg to differ,” Thomas said with conviction. “In fact, I’m 100 percent confident that you’re exactly what I’m looking for.”

“You don’t even know my name.”

“Hi, Joan Bailey. It’s a pleasure to meet you. I’m Thomas Moore,” he said as he extended his hand.

“It’s a pleasure to meet you as well, but of course I already know who you are,” she said as they shook hands.

“I thought that you might. I always seem to be at a disadvantage that way.”

“First I have a question for you,” she said.

“What are you doing in this diner in the first place? Did you just decide to stop here and see what life is like for the little people?”

“Isn’t that kind of a rude question?”

“Okay, then I guess it deserves an answer. Actually, I stopped with the intention of sitting in a booth that faces the street, ordering a cup of coffee, maybe some pie, and just doing a little people watching. It’s one of the things that I take a great deal of pleasure in.”

“People watching or pie eating?” Joan asked with a grin.

“Both,” Thomas answered as he grinned as well.

“What changed your mind? Why are you sitting here talking to me instead of doing what you came here for?”

“I’ve seen the tabloids,” she said. “And obviously I’m not a supermodel, an heiress, or a famous actress.”

“You shouldn’t believe everything in those tabloids, you know,” he said. “And besides, you do realize just how beautiful you are, don’t you?”

“Please,” Joan said as she shook her head and rolled her eyes. “I’ve seen pictures of you with some of the most beautiful women in the world.”

“And your point is?”

“I just don’t understand why you’d want to spend time with me.”

“If we leave now, I promise I’ll spend the rest of the weekend showing you exactly why.”

Joan snapped her computer shut with a flourish and said, “Okay, fine. I’ll leave with you. But I just want to say that this is completely against my better judgment; it’s a terrible idea, and I’m almost positive that I will soon regret this decision.”

She slipped her computer into her workbag as Thomas said, “Wow. You really know how to hurt a guy.”

Thomas stood up as he reached into his pocket and pulled out his wallet. He dropped two one-hundred-dollar bills on the booth, tucked them under the salt shaker, and said with a sly smile, “I’ve got this.”

“I do love a man who knows how to treat a waitress,” Joan said with admiration.

As they walked toward the door, Joan stopped to speak with Millie. She leaned in close and whispered in her ear, “Get the money off the booth, Millie. But just in case I turn up missing or dead, please try to remember who I’m leaving with.”

“Yes, it is!” Joan yelled over her shoulder as they walked into the night air.

Joan Bailey is a quick-witted, gorgeous, and successful real estate agent living in Las Vegas, Nevada. Her busy work life leaves very little space for romance, which suits her just fine. If she does ever find a free hour or two, she spends time with her friends, entertains clients, or enjoys the fun of the occasional one night stand. Too bad love often has its own plans.

One evening, Joan is working in the all-night diner she considers a makeshift office when a handsome stranger walks in. He is Thomas Moore, internationally known playboy turned businessman. The chemistry between them is immediate and impossible to ignore. Joan can’t believe this famous guy wants her, and Thomas can’t look away.

Their one night stand develops into real romance—and the sex keeps getting better and better. Lost in the haze of new love and lust, Joan never expects a dark figure from her past to reappear in the hopes of destroying her newfound happiness. There’s danger in Sin City, and Thomas and Joan’s chance meeting will change both their lives forever.

T. S. Myers was born a small-town girl in Walla Walla, Washington, and has spent most of her adult life in “Sin City,” Las Vegas, Nevada. Over the years, she worked in a cannery, a frozen food plant, and the food service industry. She is now a real estate agent, riding the emotional and economic waves of her crazy career.