The Story of Sgt. Wesley Foster 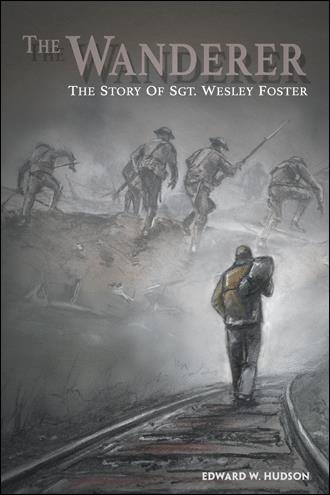 Wesley peers over the top of the trench across the pale ulcerated farm fields into the distant woods where the trees still standing are splintered and stripped of life. They appear as shadows of their former glory in the thick morning mist, which has spread from the river valleys to shroud the battlefield. It is August 8, 1918. It is an eerie morning as British and French artillery have been pounding the German lines since 0420 hours. Thoughts are swirling in Sgt. Wesley Foster’s head as the British assault troops prepare to launch their attack.

In the dim light of dawn, Wesley pulls his weathered and worn Bible from his pack. He turns to Psalms and reads where it says the sun keeps its circuit from one end of heaven to the other. He was taught that God orders all things, including the sun, moon, and stars. They follow their appointed courses to give light and heat by day, and light in the expanse of heaven by night. The seasons come in their appointed time. The wind follows its appointed circuit as it whirls around the earth. He reasons, All things seem to follow God's plan, does this include man repeating his folly? This thought does not make sense to him. God is not the author of chaos or folly.

Wesley remembers his uncle James told him once that "a dog loves to return to its vomit." He did not understand what that meant in those days long ago, fishing with his uncle as a boy in rural Arkansas, but the words sting now. He wonders, Since man does not seem to learn from the past, is this why he too also returns to his vomit? Do pride and destructive passions prevent him from doing otherwise? Is this why he is doomed to repeat his folly? Pondering this riddle has allowed him to momentarily escape the war.

As the sun rises in the east, the artillery grows silent. Wesley's thoughts turn to the muddy shell cratered expanse of No Man's Land before him. He squints his eyes and says to himself, Is it a mirage in the mist, or is it the morning light dancing off German bayonets? The Angel of Death is waiting about two hundred yards away. Wesley is seized by the sudden awareness of his own mortality. He finds himself trembling involuntarily, worsened by his damp uniform, chilled in the morning air.

He glances about as he composes himself. He whispers under his breath, "Do I have the courage to face the shrieking rage of incoming shells? Will my nerve hold as thousands of bullets begin to whizz all around me? As we charge the enemy positions, will I panic as those before me are mowed down by interlocking machine gun fire? Will I live another day to ask the same questions again?"

The trembling ceases, but the fear of failing his duty and letting his men down grips him. Once again he looks around and then returns to his inner conundrum. Has my life made any difference to those I leave behind? What has been the purpose of my existence? Who will tell my story? The anguish of his soul deepens. I left my family, the only ones who really love me. My four younger sisters idolize me. I am their hero. But nonsense, I left home when they needed a big brother the most. He pulls out an old photo of his sisters surrounding him. It is hard to hold back the tears. Look at me. I reappear on a two-week furlough after being gone for more than eight years, only to disappear again. And where do I wind up? In this bloody trench with mud up to my ankles in some tortured battlefield in northern France. They have been fighting over this miserable patch of ground, turned over and over again by shellfire for the last four years. Alas, the Dogs of War do return to their vomit again and again.

No wonder they call it the Mad Line--and not just here but for some 440 miles long, mostly on French soil, all soaked in more than a foot of blood. Most politicians and generals who have not spent time in these trenches call it the Western Front, a place to avoid at all cost. If not for the fear of death, maybe it is the stench of urine, feces, body odor, puke, rats, blood, decaying bodies, gases, rotting flesh, and foul-smelling sandbags that keeps them away. Maybe if they were here today, sitting with me in this trench, shivering, they would put an end to it.

His heart grows heavier as he considers what awaits him on the other side of this life. If I pass from this raging hell and ascend to heaven above, will God be there? Or if I descend into Hades, the abode of the dead, will He be there? What will my final fate be? I have many questions, but no answers. Will the little faith I have sustain me in this terrible hour? And if I am to live forever, on what side of eternity will that be?

Wesley silences his tormented thoughts and comforts himself by audibly praying, "O Lord, still my soul, and let a steely resolve rise within me to match the steel of my fixed bayonet." He pauses as he studies his fellow soldiers. Most are sullen in countenance. Wesley turns his gaze to the bloated bodies left on the battlefield. He continues his prayer, "Help me to remain alert and courageous that I might survive this hour of deadly pestilence. Please protect the boys, and in the fury of battle may as few die as possible this day."

The fear within begins to subside as he stares almost in a trance into the hellish portal before him. It seems to be beckoning him into to its bosom. He then hears British whistles along the line signaling their forces to charge from the trenches. It is as if hell itself is announcing that it is opening wide its mouth to swallow all who are about to enter. When the shrill sound ceases, the Siren sweetly calls out to the boys pouring over the top of their trenches, rushing toward her open arms. She reassures them, "Come unto me, my dear sons. Do not fear what is before you."

Her voice rises above the thundering sounds of battle urging them forward, "My lovely ones who are about to die, do not be frightened by the screams that you hear. Recoil not at the groans of your comrades who fall about you. Do not fear the thud of hot lead as it enters your chest. Neither be frightened by the riddling fire of the machine guns nor their bullets as they tear into your body, punching gaping holes in your flesh and shattering your bones. Fear not your limbs being ripped from you by screaming shells, even less of being shredded to thousands of pieces. You will never know what hit you. Do not fear the poisonous gas that hangs over the battlefield like a fog and pollutes the ground around you. Exposure will ravage your flesh and dissolve your lungs. You will gargle and froth with each gasp of air taken as you slowly die an excruciating death. But remember, the suffocating horror cannot touch you beyond the grave. Most of all do not fear the bayonet. Rather it is a rapturous affair as the point of the bayonet enters your chest cavity with a violent thrust. Your spirit will slip away as it penetrates deep within your body. Therefore, be at peace, my sons. The grim moment of death, however terrifying it is, will be swift and final. Your suffering will be over, and you can rest in your eternal glory. You will be immortalized for your valor and glorious deeds done on this day."

Wesley does not meet his Maker on this fateful morning... he lives to face another day on the Mad Line.

His journey of self-discovery takes him far from life in rural Arkansas in the years before World War I. He and his buddies ride the rails of America, having grand adventures before joining the US Army.

As young soldiers, they spend the next three-and-a-half years overseas in the Panama Canal Zone, the Caribbean, the Philippines, and China. After eight years, Wesley returns home to his family that had given him up for dead.

Wesley's next stop is northern France. Following intensive training with the British Empire Forces, he is involved in pitched engagements, sniper duty, and night patrols in No Man’s Land. After being mustard gassed, he spends a brief reprieve from the "Mad Line" in Paris. Wesley returns to his unit and is thrown into fierce combat during the Meuse-Argonne Offensive. In one battle the carnage is so horrifying, it is called the "Center of Hell."

Join Wesley as he grows up in rural poverty, crisscrosses America in boxcars, engages in secret military operations in America's new territories, and struggles to survive what most thought would be "The War to End All Wars."

Edward W. Hudson has a BA in Anthropology from Arizona State University, with an emphasis on archaeology and sociocultural studies. He also studied Spanish as a second language. Ed could have been a high school teacher, a college professor, a historian, or an archaeologist digging up artifacts in remote places. But he possesses a creative capacity for business as well, which led him to a career in printed packaging that included the pursuit of global business development.

Ed is retired now and lives with his wife in Arizona. However, he is not content with idle time and seeks to give back to family, friends, and former business colleagues from what he has learned and experienced in life. He also continues his research seeking to understand the significance of the connections between the past and the present, and how they shape the future.

This book has been forty years in the making. The Wanderer: The Story of Sgt. Wesley Foster is a historical saga surrounding the life and times of Ed's great-uncle. Set against the backdrop of World War One, which changed the world forever, the book gives voice to Wesley and the forgotten heroes of his generation.