The History That Shaped the Iranian Shia Clerics 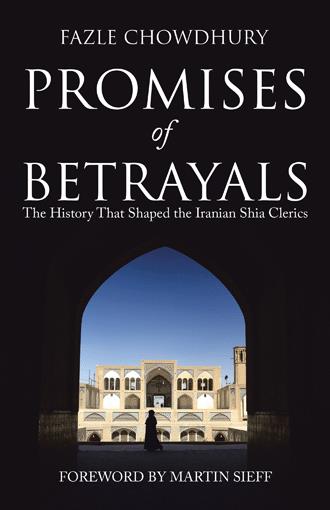 What began as a faction of rebels to form a Shia empire and in almost 500 years later lead to what is today an Islamic Theocracy. Shaped by British Colonial interference, Ottoman aggression, Russian dominance and the Shia-Sunni divide, the Shia clerics also had to contend with their Persian monarchies. For the first time since the Islamic Revolution of 1979, Shia clerics found a defining and authoritarian role in Iran. Fazle Chowdhury's authoritative analysis on why western powers always struggle against Iran explores in his book Promises of Betrayals; the History that shaped Iranian Shia Clerics.

Promises of Betrayals demonstrates the revealing history but complex and profound caution in the re-examination of Iran as it has remained shrouded in a murky cloud to those responsible for directing United States policy. Fazle Chowdhury fills the crucial information gaps by exploring key Iranian history events that has directly and indirectly shaped Iran’s doctrine while syndicating 500-years of trials that has permanent implications on the clerical regime’s present chronicled driven policy strength of regional influence and expansionism in response to drawing on past clashes with ruling Shahs and foreign interference that once tore Iran apart and one which the Shia theocracy are determined to avoid today.

FAZLE CHOWDHURY is a contributing writer for the Portugal based Expresso newspaper. He is a former International Business Machines (IBM) Management consultant and previously served in United Nations Development Program (UNDP).