by L. A. Jaworski 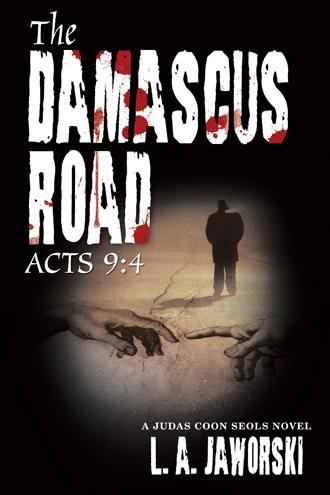 Sister Patricia is a forensic pathologist. The body lying prone on the table was the most recent victim. Sister was clinical in her exterior post-mortem examination. She noted that the tape recorder was on as she began her narration of the examination.

“The body is that of a white male, approximate height… The individual’s back is heavily tattooed. The art work is nothing short of magnificent.” Sister paused for a quick look before continuing...“it is a reasonable facsimile thereof of Michelangelo’s ‘The Last Judgement.’” Sister took one last look and was about to continue before being interrupted by Deacon Seols.

“Sister, excuse me but is this a guess or are you certain of the depiction?”

“It is a certainty” Sister said as she stopped the tape and looked at Deacon Seols.

“Deacon Seols, Michelangelo’s, The Last Judgment, is one of the most famous fresco paintings of the Sistine Chapel. It is over sixty (60) feet in height and nine (9) feet in width. It is located on the wall behind the altar and is a must see for all. Just short of the plane ticket, hotel and entertainment cost I strongly suggest that one simply gaze upon this man’s back.”

Deacon Seols looked at her and grinned. Sister Patricia was like no nun he had ever had as a student. The school district that Seols resided in was extremely poor. The Seols were no richer than poor. Dirt poor to be exact. Thankfully his mother cared enough for his education to enroll him in the local parochial school. It cost some, but she found a way to pay for it. “I du’ what I must” she always said. “The spirit is in ya Judas. Ya have da pow’r. Ya what I nev’r was.”

These words resonated in his head as he looked at sister. He almost smiled at the remembrance of his mother. A tear weld-up in the corner of one eye which he thought of wiping away with the index knuckle of his right hand but decided against it. Sister being sister, she may frown upon such a display of emotion. She may see it as a weakness that could later be exploited. Sister was always vigilant. Just short of an outright wipe, Seols’ blinked more frequently instead.

Looking up, he smiled at Sister “saving myself the cost of a plane ticket.” He smiled but continued with the photos. When he was done they, both stood there for a moment and admired the art work.

“The use of colors is amazing.” Seols said.

“The detail and artistry are even more so,” Sister Patricia commented. “This was one of Michelangelo’s more famous paintings. The rewards of eternal happiness versus the horror and punishment of hell. You’ll notice the use by Michelangelo of wingless angels as they carry the cross Christ died upon. Beneath them the blessed gathering in heaven” Sister said as she continued the explanation of the painting. “You’ll notice Christ is in the center. His right arm is raised. Those on the left rise up to heaven and those on the right are damned to the fires of hell for all time and eternity…”

“Left is right, and right is wrong” Seols mumbled more to himself than Sister. The tape recorder was sensitive enough to have recorded his comment for prosperity sake.

“This is unusual” Sister said without hesitation.

“What?” Seols asked without really looking at the body. As she spoke he noticed the branding.

Sister hesitated. How much to say. What was enough versus too much she thought as she began…“Jesus proclaimed to be the ‘Alpha and the Omega.’ Revelations is filled with passages. The Greek alphabets first and last letters. Jewish rabbis reference the alpha and omega as the whole of everything. Revelations 22:13 Jesus’s proclamation…‘the Alpha and the Omega, the First and the Last, the Beginning and the End.’” Sister paused as she looked up. Seols was looking at her. He almost asked …what…but held off.

“Then there is the Second Book of Peter 3:10…‘and his second coming will be the beginning of the end of creation as we know it.’ There are many that believe the United States is symbolic of the end. The dollar bill for example has the Omega symbol on it as it shrouds Washington.” Sister produced a dollar bill and showed Seols the hidden symbol. What does one believe. When is something just a coincidence?

“But that would be in opposite of what we believe is happening?” Seols commented.

“Yes, it would Deacon.” Sister responded. “I believe that this man may have been a defrocked priest and the symbols are meant to mock him. This is just a quick guess. But as for the case at hand, I would say that this individual was more than just a minion. He may have been a lower type of priest.”

“A Deacon, Sister?” Seols asked feigning hurt feeling. Sister only looked over her glasses providing Seols with a look confirming her lack of interest in taking the bait. Her pale gray eyes still held a spark. Seols had seen it a time or two. He had even been the recipient of her wrath. In her youth she may have been called a spitfire. A tomboy even. Never would she have been considered attractive. Intelligent…yes. Personable…yes, but only if she made the choice to befriend you.

Judas Coon Seols is a simple family man with a strong faith in God and a new purpose as deacon of a church founded by his acquaintances, Sister Patricia and Father O’Brien.

Sister Patricia is a forensic pathologist who, along with Father O’Brien, has finally determined her identity as a practicing Christian. As she carefully examines her most recent corpse tattooed with Michelangelo’s The Last Judgement, Judas looks on as both are filled with questions, especially since this is just one of many recent strange deaths. Meanwhile as two detectives begin an investigation into the murders, they are less than successful—until they stumble upon Sister Patricia’s possible involvement. While attempting to fully understand the killer’s motive, the detectives must overcome several obstacles as those involved are forced to trust not just themselves, but also their individual beliefs. Unfortunately, as they are all about to discover, people are not always who they seem.

The Damascus Road chronicles a perplexing series of murders as a pathologist, church deacon, and two detectives become immersed in a battle of good versus evil.

L. A. Jaworski is a penname. The author resides in Central Illinois. After years of practicing as a tax attorney, now an empty nester, the author is pursuing a lifetime dream. The Damascus Road is the debut novel.