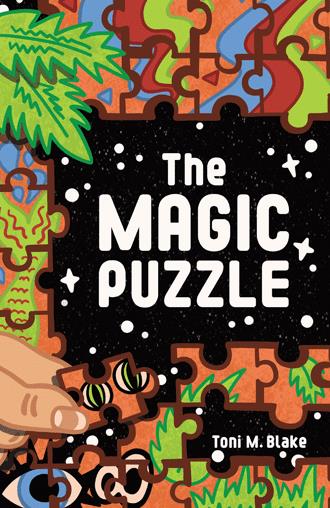 We had a big coffee table in the living room so I decided I would put the puzzle together there. Dad gave me a piece of flat wood he had so I could build the puzzle on something that could be moved easily. I looked at the picture on the box. The swing was down. I opened the box carefully. What if Carmella was somewhere in these pieces? Just then Andy came over. “Would you like some help?” he asked. “Yes I would, but please be very careful,” I answered.

We began to put the end pieces together, like Carmella always told me. “Once you frame it out,” she used to say, “The rest is much easier.” We found the pieces of the pretty blue sky that lined the top of the picture. Then we sorted out red pieces that looked like the barn. Andy started to put the tree-tops together, and was working his way toward the middle. I kept separating pieces so I could find the bridge and the swing. I wondered if something magical was supposed to happen.

After we worked on the puzzle for about an hour, Andy said, “See, no magic, just a regular puzzle.” I was beginning to believe the same thing, but there was an excitement I had about working this puzzle. “It is kind of fun though isn’t it?” I asked Andy. Just then Andy’s friend Aaron showed up at the front door. “Hey Andy, what’s up? How about we shoot some hoops?”

Then Aaron looked at the puzzle, and looked at me. “Hi Elita. I’m very sorry to hear about Carmella. I see you have a puzzle. Good idea.” Then he picked up the box and read the cover. “Oh wait here, it’s a Magic Puzzle!” He said in a fun kind of way.

“Be careful,” I quickly said. “It was Carmella’s.”

“I was just helping her with it,” said Andy.

“Carmella was putting this puzzle together?” Aaron all of a sudden sounded interested.

“Yes, it was the last thing she was doing before she disappeared.”

“Andy seemed very interested in the puzzle as he put the sky and tree parts together.

“It’s okay Andy, you can go shoot hoops with Aaron if you like,” I said. But Andy acted like he didn’t hear me. “Andy,” I said louder.

“I said you can go shoot hoops if you like. I’ll be okay here,” I repeated.

“Okay, good. Thanks. Lets go shoot hoops Aaron,” he said as he got up.

“Good,” I said as I continued to look for the swing and bridge pieces.

“I won’t be long. Lets see how far you get by the time I get home,” he added.

“Okay,” I said, as I felt very drawn to the puzzle. I was beginning to feel something weird on my fingertips when I touched the pieces. I couldn’t get my eyes off the farmhouse. For some reason it was easier than usual to find each piece. It’s almost as if they were jumping out at me.

“I don’t know, maybe Aaron’s house or the park to shoot some hoops,” said Andy.

Andy and Aaron where both staring at the puzzle while they were talking.

“Okay, but be careful. We don’t know who is out there. Send me a text message from your phone every hour so I know you are okay.” Mom said.

“Mom we will be fine. See? Nice big strong boy,” he said as he flexed his muscles.

“Okay hot shot, go on, get out of here, but send me the text messages anyway.” There was no fighting with her. As Andy and Aaron walked out the door I could here Aaron say, “Hey, did you see that puzzle like, move a little on it’s own?”

Then Andy answered, “I think so, but I thought it was my imagination.”

After they left, I finally finished the tree. I was looking frantically for the swing when I thought I felt something bite my finger. “Ouch!” I said out loud. I definitely felt something when I touched the puzzle.

“ Are you okay in there Elita?” I heard mom call from the laundry room. “I’m fine,” I answered back. Part of the farmhouse was put together now, and I could see there were people sitting on the front porch in the picture. I looked at the box, and there was no one sitting on the front porch in the picture on the box! This is it! It is magic! I tried to touch the puzzle again to see if I felt anything. Nothing happened, so I picked up a piece of the farmhouse and snapped it in place. Then I saw the bridge pieces. As I started to put them together I suddenly felt that shock again, so I pulled my hand away. Thoughts of quitting ran through my mind. Then I thought about Carmella. If I really believed she was in the puzzle, then I had to finish it. Then I saw the swing piece and I knew right where it went. I grabbed it quickly and snapped it in place. The swing was now in the down position, just like the picture on the box. As I carefully and slowly picked up the last piece it was like a bolt of lightening went through my whole body. I struggled to put the piece down, but my hand was being pulled to the place where it fit. As I snapped it in place it felt like something or someone was pulling me in different directions. I stretched for the tree, and found myself standing next to the tree in the puzzle! It happened! Just like that I was in the puzzle! Everything was all there, just like the picture. The sky was blue and perfect, the white farmhouse, the trees, the barn, the bridge, the stream, and the swing was all there!

“We got her!” I heard a man yell. There was a very tall man in a black suit walking toward me briskly. Then I saw Carmella run out of the house, “Run Elita!”

When Elita’s best friend, Carmella, disappears under mysterious circumstances. Elita feels driven to find her. She’s convinced the puzzle Carmella was working on the day she disappeared is somehow involved. She takes the puzzle and puts it together herself—and suddenly finds herself pulled into Puzzle Land.

Elita is confronted by a strange and sinister man named Professor Robinson, an evil wizard who cast a spell on puzzles. In the beginning, he wanted to create a special place for the homeless children of the world, but his greed took hold. The professor began to kidnap any child he could.

Soon, Andy and Aaron follow Elita and Carmella into the puzzle. As they travel through Puzzle Land, their bodies begin to take on the shape of a new creature. It is only after they learn to forgive one another, to be honest, and to work as a team that they find the strength to escape Professor Robinson and his puzzle world.

Toni M. Blake has been interested in writing children’s fiction since she had children of her own. For about fifteen years, she was a story teller at her church, and now she shares her stories with her grandchildren. Blake lives in Lake Geneva, Wisconsin with her husband, Jack, who also enjoys writing. They have three adult children and three grandchildren.