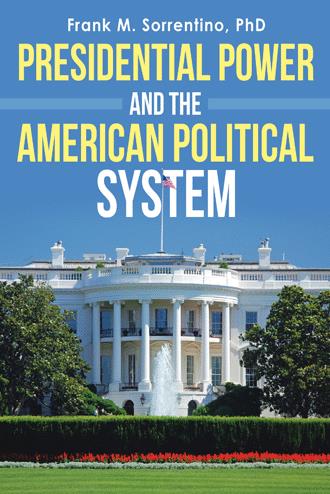 This book will explore Presidential power within the context of the American Constitutional system and American politics. This book investigates how bureaucracies are deeply involved in American politics. Bureaucracies are not neutral entities and their power comes initially from their expertise. While commencing with expertise, this facilitates their ability to have to provide advice, develop plans for implementation, and engage in propaganda! This is further buttressed by their relationship with Congressional Committees and Subcommittees and their relevant interest groups and with their use of ideology and symbolism. The books begins with the office of the President and the various theories on Presidential power which will maximize its influence in the American political system.

The Presidency is a complex institution of great power and significant restraints. It is presented as the head of the Executive Branch. This book explores the delicate relationship has with the Bureaucratic establishment and its implications. It begins with an explication of the office of the President and the various theories on Presidential Power and Leadership which will maximize its influence over the political system.

The first theory to explore was that of Richard Neustadt who develops a theory of transactional power. The president cannot command because of the nature of the American System namely, The Separation of Powers and Federalism which divide political power and dilute executive power. Consequently, a president must bargain with the other political actors including bureaucratic leaders exchanging the President’s scarce resources for support on the President’s agenda. The astute President weighs his priorities and determines what he is willing to pay for certain policies. Neustadt states: “This is no place for Amateurs.”

The second Theory that is explored is that of Richard Pious who presents the President with the Power of Command. Presidents have a great deal of authority that has been mostly expanded through American History by various precedents. These precedents are now part of the base of his authority base and make the president a formidable force in American Politics. These additional powers are generally confirmed by the Courts and are accepted by most political actors. The President has been most successful in expanding its power in the field of Foreign and Military Policy.

The Third Theory is presented by James MacGregor Burns who postulates a paradigm based on Transformational Leadership. Presidential Leadership is enhanced when the President engages other political actors and citizens by appealing to deeply held values that are ingrained into the political culture.

The book then moves to what is commonly referred to as The Politics of Bureaucracy. In this section, the role and inter-relationship of Interest Groups, Congressional Sub-Committees and Bureaus is explicated. It is very difficult for a President to successfully challenge when there is agreement among its constituent members. This arrangement is often referred to as Iron Triangles. Presidents are rarely successful when he challenges these Iron Triangles. Presidents either looses or must expend tremendous political resources to prevail.

This work investigates how bureaucracies use not only their own material political resources but also develop Ideologies that allow them to compete in the area of values and ideas. Ideologies provide deeply ingrained emotional support among the citizens and other political leaders that allows these bureaus to compete with the President and other political actors in the arena of ideas for predominance in their policy area.

Bureaus utilize both material and ideological techniques in three area of interaction, namely: Advice, Implementation and Propaganda. Each of these areas provides bureaus with ample opportunity to not only defend their interest but often to expand their political power. Each bureau has its unique strengths and weaknesses to exploit these resources. In addition, the skill of its leader and the area of public policy where the bureau is located also impact its power and its likely success. Bureaucracies that are in the area of National or Domestic Security appear to have a distinct advantage due to the ability of these bureaus to utilize a threat component that heightens their ability to intensify emotional support for their bureau and its interests.

This study utilizes the Federal Bureau of Investigation as its case study. The FBI holds a unique place in America’s society and politics. Its power is awesome, thanks in part to its preeminence among law enforcement agencies, and its shrewd, long-time leader, J. Edgar Hoover, who became a folk-hero. In addition, it developed and adhered to a formula for success which perpetuated its ascendance despite many challenges, and substantial shifts in the nature of personalities who served as Attorney Generals and President of the United States, to whom the FBI reported. Through the decades, the hegemony of the FBI remained intact, no matter how much the world around it changed, no matter the political party or Presidential administration holding the reins of power. For decades, at no moment did the influence and place of the FBI change materially.

The Chapter on Martin Luther King focuses on the relationship between King and the FBI. The Bureau’s highly personalized and ruthless pursuit of Dr. King gained added momentum when he was perceived as a threat to its ideology and its self-portrait as a peerless law enforcer. King complained publicly that the FBI has failed to protect blacks in the South from violations of their civil liberties. This analysis provides a detailed account on how far the Bureau was willing to go to defend its ideology when it perceived it was threatened.

The view of the FBI’s involvement in 2016 demonstrates that the Bureau continues to be a major player in the American Political System. The actions in the Criminal Investigation of Hilary Clinton’s private server and the deletion of a large portion of her emails that were under subpoena and the counter-intelligence investigation into Donald Trump’s campaign as to whether he or is campaign were colluding with the Russians were both problematic. These investigations did not follow protocol and suggest possible potential political motives on the part of the Bureau and its leadership.

The most significant and dynamic struggles for power in the United States of America occur between presidents and the federal bureaucracies, and these struggles often overshadow those between Congress and the courts. The Federal Bureau of Investigation, along with other agencies such as the Central Intelligence Agency, the National Security Agency, and the Department of Defense, all wield significant political power.

In Presidential Power and the American Political System, author Frank M. Sorrentino analyzes the president’s ability to influence and prevail over these powerful bureaus. He eloquently evaluates how effective presidents have been in this regard, since these agencies have great expertise and control over crucial national and international security information. In addition, presidents must effectively navigate the unique American political system that includes separation of powers, federalism, and decentralized and undisciplined political parties, all of which serve to dilute executive power.

Using the case study of the FBI, Sorrentino shows how bureaus can inject their interests and political values into their work and goals. Presidential Power and the American Political System demonstrates the power of the FBI in particular to be a bureau that pursues its own interests and can have a significant impact on limiting presidential power and other actors in the wider American political system.

Frank M. Sorrentino received his master’s degree and PhD in politics from New York University, and he received his bachelor’s degree in political science from St. John’s University. Dr. Sorrentino is the author of seven additional books, including Presidential Leadership and the Bureaucratic State, American Government: Power and Politics in America, Ideological Warfare: The FBI’s Path toward Power, Soviet Politics and Education, and The Review of Italian American Studies. He has also served as contributing editor to The Italian-American Encyclopedia and The Encyclopedia of the American Presidency. Dr. Sorrentino is currently working on a new book, Leadership in the Twenty-First Century.