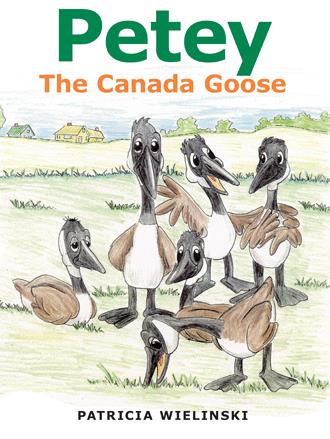 It was getting to be time for moving on and all the Canada Geese were gathered in the yard making plans. They were talking about the flight path, the time it would take, where they would stop and other details. Then, as he was walking around the yard not paying attention, Petey stepped in a hole. "Waahk!" he cried. "Waahk! It really hurts. I don't think I can go with you." But the other geese all gathered around and said they would take care of him so he could along." Petey tried hard all weekend to use his leg and just kept thinking how you have to try, try, try to do something until you make it happen. And so he did. How amazed the others were to see how he was healing. And how happy Petey was to see they all cared about him.

It’s time for the Canada Geese to head north, and the flock is gathered in the yard to create a flight plan. Just then, Petey steps in a hole and hurts his leg. He’s not sure he’ll be able to fly north with the rest of the geese.

But geese have a great sense of loyalty. No one gets left behind. The other birds wait patiently and hope Petey recovers enough to fly.

An informative picture book about geese geared toward middle readers, this story follows Petey, an integral part of a group, who realizes the importance of determination and teamwork.

Patricia Wielinski grew up in Ohio and graduated from Anthony Wayne High School, Whitehouse, Ohio. She attended the University of Massachusetts, Amherst, and earned a bachelor’s degree in English from Loyola College of Maryland, Baltimore. Wielinski lives in Rocky River, Ohio. She has one grown son. She is the author of The Blue Parrot and the Little Monkey and The Tree.