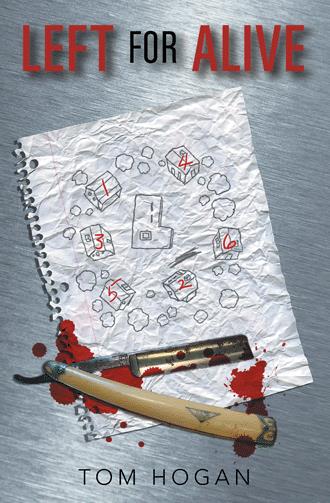 "It's like I'm sitting with the cast of Deliverance," the woman said, staring across the table at the three men. "All we're missing is the little guy with the banjo."

The men stared back at her, their faces hard and flat. The woman returned their stares, the smoke braiding from the unfiltered cigarette held deep between her second and third fingers, snaking and then disappearing in the black air overhead. A breeze slid through the bar's open door, pushing the smoke towards the men. When the one with the crooked nose frowned, the woman brought the cigarette down below table level, receiving a slight nod in return.

It was after closing time and The Gimp's was empty except for the four of them. The bar was dead dark, lit only by the dying fire at one end of the long room and the thin flicker of neon at the other. William and Lucky had stayed behind to help The Gimp close up. The woman was there uninvited.

The left side of her face slipped in and out of shadow in time with the neon, the whirring of the tape recorder the only sound. Her eyes moved to it. "Fine. We'll go off the record, if that'll make you boys more talkative." She jabbed her cigarette into the heavy glass ashtray and hit the Off switch.

She shook a fresh cigarette from the pack in front of her. None of the men made a move for the matches. She lit the cigarette herself and held the flaming match in front of her. "But let's get a few things straight, okay?" she said as the flame closed on her fingers. "You don't want to help me, that's fine. Just don't insult my intelligence in the process."

The men's eyes moved from her face to the flame, which had reached her skin. She held the match a final beat, her eyes looking past the flame at the men, then shook it out with a single snap of her wrist. "For starters, lose the aw-shucks routine, okay?  Please. You guys are about as simple as calculus."

She patted her notebook with her cigarette hand, dropping a touch of ash onto the cover. "According to my research I'm sitting across from a combined nine years of higher education and six years of prison time. So spare me the Gomer Pyle act, okay?"

The tall one broke the silence. "Since you asked so nicely, how can we be of assistance?"

The woman opened the notebook and took out two pieces of paper. Her fingers were long and yellow, the nails bitten just short of the point of pain. She pushed the papers across the table, the corner of one catching for a moment in the heavy grain.

The Gimp turned on a standing lamp with a ratty beige shade. The tall one read the two pages without touching them. Then he pushed them over to The Gimp, who hummed tonelessly as his finger moved down the page. Lucky sidled to the back of the wheelchair and read over The Gimp's shoulder, his lips moving slightly as he kept pace.

"You write well," the tall man said, when the men had finished reading. "The first one--the Fairchild piece--grabs you from the opening paragraph."

"You're only saying that because you don't want me to write the second one."

"I'm saying that because the second one is lazy reporting. And you know it. Your hypothesis is shaky, so you prop it up with a couple of sensational anecdotes and hope no one notices the lack of journalistic integrity."

"Now there's a transition. From hillbilly to full-scale erudition in six seconds." When he didn't return the smile, she dropped hers. "You miss it much, William? The teaching? I'll bet you were a hell of a professor." With no acknowledgement, she pushed on. "The first one--that's trodden ground. There's always a market for Donna Fairchild," she held up her fingers in quote marks--'the Salinger of the left'--as long as she stays disappeared. So they'll publish it and I'll get to pay my rent, neither of which is a bad thing."

She nodded at the second piece of paper. "But this one. All the mystery surrounding your boy makes it more compelling, and you know it. If I connect the dots the way I think I can..." She tapped the paper. "I get the cover and a staff position. Especially if your pal Josh and Fairchild are connected the way I think they are. It comes down to the dots." She smiled sweetly. "Which is where you guys come in."

"What kind of dots?" The Gimp pushed back from the table and wheeled his way among the tables, emptying the ashtrays into a plastic bar hanging from his armrest.

"Oh, I don't know," the woman said, mocking his nonchalant tone. "You mean, outside of his links to Fairchild and to the Vasquez murder? Or why he's always the cops' first stop whenever there's a rape they can't solve? Or where he got the money to buy half this mountain?" She stubbed out the cigarette, picked up the notebook and tape recorder, and stood up. "Or where he goes when he disappears every six months?"

She smiled slightly as he stopped wheeling.  "Didn't think I knew about the disappearances, did you?"

She walked to the door and stopped, her hand hovering over the knob. She turned and fixed her eyes on William. "Still don't think I'll write it, Will?"

Her hand tightened on the knob. "If you knew anything about reporters, you'd know the last thing you do is threaten us."

He nodded. "And if you knew anything about convicts, you'd know that if we were going to hurt you, the last thing we'd do would be warn you first."

She started to say something, then stopped. She turned the knob and stepped out into the night.

Northern California in the early 70's. An investigative reporter is on the trail of radical attorney Donna Fairchild, who hasn't been seen for three years. In the course of her investigation, she discovers a group of ex-cons and political refugees (including Fairchild) living in an abandoned lumber camp.

As the investigation broadens, a number of questions emerge about the ex-cons and their mysterious leader. Why do the police interview him after every local rape? What is his relationship to Fairchild--and to the Vasquez murder? Where did he get the money to buy the camp and much of the mountain? And where does he disappear to every six months, returning battered and bloodied?

The group includes The Gimp, the wheelchair-bound owner of the local bar and unofficial mayor of the mountain; Lucky, who doesn't have an honest bone in his body; William, a blackballed professor; Clark, who no one has ever heard speak; Alexis, the stockbroker turned cabbie; and Josh, the mysterious figure at the center of it all.

A series of rapes and murders--past and present--bind this group together. As these assaults increase in severity and number, the mysteries surrounding Josh and the group are resolved in a shocking, violent finale.

Tom Hogan lives in Austin, Texas, with his wife and two daughters. His professional life has ranged from being a university lecturer in Holocaust and Genocide Studies to technology marketing. He is the co-founder of Crowded Ocean, a Silicon Valley marketing firm that has launched over fifty startups and is the co-author of The Ultimate Startup Guide.