by Rochelle King & Cover design or artwork by Haleigh King 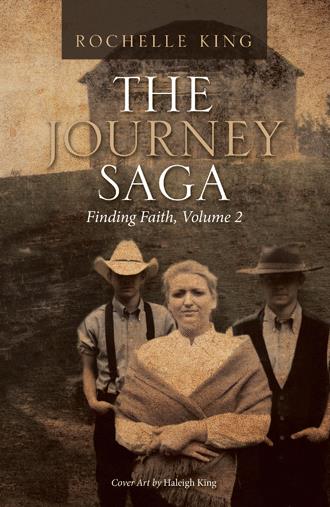 Chase rushed out the opening of the cave, grabbing onto the trees with each step. He looked to his left then to his right, trying to find where the screams were coming from, but he couldn’t see anything. He headed west towards the lining of the forest hoping to find something, anything that could point him in the right direction. “Lord please help me find whoever’s out there, give me the strength to get to them, whatever it takes,” he prayed as the wind grew stronger, blowing the hat from his head, and lifting his feet off the ground. He wrapped his arms as tight as he could around an old Cedar tree praying it would hold him down.

A faint cry came from the opposite direction, catching his attention, Chase loosened his grip from the tree and headed back the way he came. Pushing against the violent winds, he made his way through the woods, as debris blew all around him. His heart began to race as he heard another scream, “Oh Lord, please help me,” he begged, realizing it was a child.

He stooped to the ground trying to get below the wind, he thought if he could get down low enough he might be able to pin point where the cries were coming from, but it was no use he still couldn’t hear over the roaring of the wind and the rustling of the trees. As he stood up something struck him on the right side of his face sending him back to the forest floor, taking his sight. He wiped at his eye trying to clear his vision, but the more he wiped the worse it got. Feeling something sticky and wet soak through his sleeve, he pulled his arm back to take a look, blood poured down his forehead and off his chin. Grabbing the handkerchief from his pocket he frantically wiped at his head, nothing was working he couldn’t get the bleeding to stop, it was obstructing his sight, he knew he didn’t have much time, “Lord Please help me.”

Chase took a deep breath and held it, trying not to make a sound. Closing his eyes, he listened as the wind ceased to blow and everything became quiet and still.

He jumped to his feet, he heard the child as clear as if she were standing right beside him. Pushing the branches of a small weeping willow to the side, he fought to see through the blood. Something moved across the field, squinting his good eye he tried to focus. Another cry filled the air as a little head popped up from behind a large oak tree, that had been thrown on the prairie, “thank you, Lord.” The winds began to blow, and the storm picked up like it had never ceased, “Thank you for speaking peace, and calming the storm so I could find them.” Chase stayed to the edge of the forest making his way around the outside of field, he needed to get closer before heading out into the open.

He raced against time to get to the other side, his heart fiercely beat within his chest, he needed to stop and catch his breath, but there was no time, the funnel cloud was getting closer, he’d never seen anything like it before. He needed to get to the little girl and back to the cave quickly, running as fast as his feet would carry him, he swerved left, then right, dodging crates and other belongings that had fallen from wagons. A pair of harnessed horses rushed straight for him as they ran in a panic towards the trees, Chase dove out of their path, feeling a searing pain as a hoof grazed the side of his left leg. “Give me strength Lord,” hearing a whimper he jumped to his feet pushing the pain out of his mind and ran towards the tree. The closer he got he noticed the tree had landed on the tongue of a wagon, knocking it on its side and releasing the horses.

The cries grew louder as Chase rushed to the side of the wagon. “Hey there sweetie, where’s your Pa?” He took a deep breath trying to calm himself down, he didn’t wanna scare the little girl any more than she already was. “It’s gonna be ok, but we need to get outta here.”

Emilie began to jerk all over, dropping her doll as the color drained from her porcelain face.

She sank to the prairie floor, sucking her thumb, not turning loose of the wagon axle, with a blank stare in her eyes.

Chase knelt down beside her and placed an arm around her little waist, “I need to know where your parents are, you don’t have to tell me, but can you show me?”

Emilie pulled her thumb from her mouth and pointed under the wagon as she began to cry uncontrollably.

“Are you sure?” He desperately hoped she was wrong, they didn’t have time to move the wagon. “Lord if she’s right please help me get them out.”

She placed her trembling thumb back in her mouth and nodded as she sobbed.

Chase Johnson and Jeffrey Roberts need some time to think after discovering the truth about their past. The two learn they are twins, but Jeffrey was separated from the family at birth and given up for adoption by their father, Jacob. Neither knew the other existed until 1825 when Isabel reads a letter penned by Jacob. Jeffrey is shocked to learn he has a family, both a brother and a grandmother.

The twins must learn to come together and forget about what might have or should have been. As Chase and Isabel return to Scotland to be reunited with the King, Jeffrey sets out on a cattle drive determined to find himself and much needed faith. He prays to the Lord for guidance as he faces personal and physical crises.

This second volume of The Journey Saga follows Chase and Jeffrey as they decide whether to come together in the eye of the storm or turn their backs on the future that was meant for them.

Rochelle is a stay at home wife and mother of two, she’s been married to her husband Mark for 22 years, they have a daughter Haleigh (19) and a son Aaron (16), along with 4 fur babies. She resides in the beautiful Blue Ridge Mountains of Western North Carolina with her family, where she loves to write inspirational fiction stories. She enjoys camping and spending time with her family and friends. Cooking has been an enjoyment of hers since she was a little girl, now she’s learning to cook the pioneer way. If she had one wish it would be to live in old west times, life was so much simpler then. She loves learning about the past and learning to do the things they did like making homemade lye soap and cooking over an open fire. Her favorite movies are movies based on the old west especially ones like When Calls the Heart and Love Comes Softly, She loves to learn about people from the past like Billy the Kid, Doc Holiday and Wyatt Earp, this draws her love and passion for all things western and for her stories.