We Built the Bridge 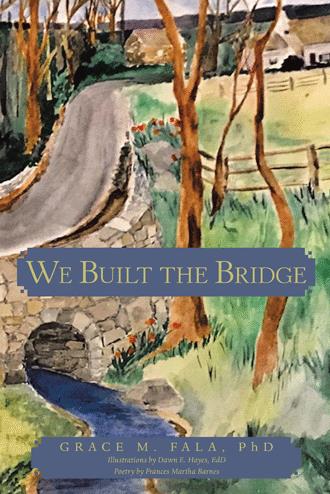 Folks were as odd to us as it seemed, we were to them. Curiosity kept us afloat though, as local customs and proprieties steered conversation more than usual. Individual personalities appeared eclipsed by group protocols. Relational roles already assumed were unfamiliar to us and hence, awkward. Even the silence that stretched the chit-chat made us stir. Is it my turn to talk now? Or will I be interrupting? Are we supposed to pause, to reflect? Am I blurting more than relating? What is permissible? And what is taboo? Topics that revolved around church, recipes, nature or the valley seemed okay but still, I wasn’t sure. As novices, we listened at best and, by doing so, learned that this very event was more properly a “gathering” than a “picnic.”

Even though my parents made every effort to have their seven children say grace before meals, I was unaccustomed to doing it in public, at an outdoor Amish neighborhood gathering, at sunset, in the middle of nowhere. In an effort to redeem myself, just in case somebody actually did notice, I thought that I should perhaps compliment the chefs of the delicious foods. Saying something, anything really, might help. I tested with, “This casserole is really delicious! So fresh! You made this?!” to the woman on my left and was greeted by an awkward and stiff half nod. Then I tried the neighbor to my right with, “Wow, this pie would win a ribbon at the Grange Fair, it’s so good!” Nothing. Crickets.

No doubt, I should have kept quiet. It’s not easy being silent though, while feeling like the guest of honor and the stranger from “Never Land” at the same time. My social reality began to unhinge. I looked around. The compliments weren’t going over. Nobody else seemed to be giving any. Maybe compliments sound boastful and complaints, disrespectful? No compliments? No complaints? My Italian blood started flowing backwards! I didn’t quite know what to say or do. Body gestures failed me and everything natural fell completely into a cultural pit. How can we be only a three-hour drive from Philadelphia or Pittsburgh and still be so removed? What kind of a “neighborhood” is this anyway?

Dawn and I were not only the new kids on the block; we were easily the oddballs. Words of wisdom from Stonebridge’s former resident began to resonate. Fran was known to have said, “Everybody in the valley knows everything about you. What they don’t know, they make up.” Waves of timidity and bashfulness flooded us. One-by-one gatherers approached and reintroduced themselves, like they did the night of the auction. We observed once again, how some folks seemed surprised and slightly disappointed that we had not remembered their names. Sensing this, I attempted to memorize as many names as possible.

There were approximately eleven families represented in a gathering
of about thirty people. Many guests were Mennonites. Two families were Amish. Three were Beachy Amish, and completely new to us. Though modest in most ways, individuals who are Beachy Amish-Mennonite tend to be more modern; they drive cars, own phones and use electricity, although radio and television are restricted. While beards and bonnets remain similar, those who identify as Beachy Amish attend a physical church building while the Amish in our valley, each affiliated with a specific Ordnung, use one another’s farms for Sunday worship and fellowship.

As newcomers, we noticed two questions asked most frequently: Where are you from? What church do you belong to? No matter how much we fudge the answers, no matter how often we explain that suburbanites are not city dwellers, we’re still known as “city” gals who might travel all the way to Provincetown, Cape Cod, a twelve-hour jaunt, for fellowship and sisterhood. Neither Dawn nor I mind, however. We have come to accept the ways by which our neighbors learn to value one another. We also recall days living in the suburbs. When meeting people there, questions commonly asked were: What do you do? And where do you work? We enjoyed shifting our focus from how we function to how we relate.

One question in particular that night, left such sweet residue. Dawn was on one end of a conversation and I was on another when Israel, one of our new neighbors, asked if we were sisters which, for us, is not an uncommon inquiry. Israel lives on the property next to us, to our left. He told us that he and his wife had six daughters, many of whom sat behind us at the gathering, speaking Pennsylvania Dutch. I fumbled slightly, hearing echoes from the closet of my past, and explained to Israel that, “We aren’t related but,” with a chuckle, “we are close enough to be sisters.” With poetry in his voice and love in his eyes, he mused, “Oh, so this is the one you favor?” Startled, I did not quite know how to respond. I even had to make sure I heard him correctly. “Yes, you could say that,” I blushed. Serenity entered and an echo was quieted. Somewhere between Chet’s blessing and the melodic sounds of Pennsylvania Dutch I lost my senses and didn’t notice that Israel was attempting to understand us. He then carried on the conversation with Dawn.

To this day, Israel’s inquiry has been a rhetorical treasure of mine. Just to think if not for an incidental passing comment, I would have
missed his affirmation. In her song, Conversation, songwriter, Joni Mitchell, sings, “Love is a story told to a friend. It’s second hand.” With an aromatic tease, I felt a second-hand love linger into the night. For all of these made-up, perceived differences between us, Israel had found a simple, common way of asking a complex question. He created romance out of the awkward and illuminated the beautiful. Like a child, I rehearsed his poetic line that tells an entire story, again and again. I needed to confirm my own awakening. Dawn obliged, knowing that she is indeed the one I favor.

Serendipity happens when people, places, time and events intersect and something inexplicably good emerges. Serendipity intrigues, as it brings good fortune. Those who embrace it are often considered idealistic and wishful, or even wacky. In We Built the Bridge, author Grace Fala makes serendipity real.

Magical stories often stay within the parameters of acceptable norms. They generally involve children and parents—typically, individuals who identify and relate as man and woman. But this fairytale doesn’t follow the mainstream. This serendipitous story graced two unlikely singletons—two whimsical and, according to customs, maverick women.

While searching for an affordable home in a suburban area, something unbelievable threw them off course. A strange energy gripped and carried them toward a house charmed with magnetic forces, as if calling their names. Fala reflects on how two women from Philadelphia who love one another now make their home in a farming valley among the Amish.

Praise for We Built the Bridge

A delightful, passionate, playful, and significant story, not just for those who live in or visit Pennsylvania’s Amish country, but for us all.
—Virginia Ramey Mollenkott, PhD, Author,
Omnigender, Sensuous Spirituality, and other books

Grace M. Fala, PhD, earned a master’s degree in philosophy and a doctorate in rhetoric and teaches communication courses at Juniata College. She is an award-winning teacher and motivational speaker. With a knack for audience engagement, she often travels to facilitate retreats that bring cultural empathy, equity and inclusion, creative communication, storytelling, music and listening into a space of play. Fala shares a home with her spouse and numerous farm animals in a rural Amish valley in Pennsylvania.