When Doctors Finally Said No 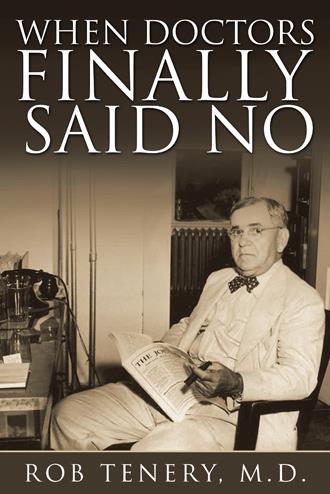 Feeling her touch on his shoulder, Terrell turned around, as Allison joined him at the computer. Their eyes locked on the screen with two long minutes passing before she finally responded. “You can’t,” she said, tears flooding her eyes. “It goes against everything you vowed to uphold when you went into medicine.”
Terrell pulled Allison into his lap, resting his head against her chest. “As doctors, we don’t just have a responsibility to our own patients,” he said looking up, his mind racing to bring order to this mass of contradictions being thrown at him. “We also are the doctors for the system that takes care of them from the hospitals to the large insurance companies that pay for that care. Well, that system which all of us have depended on is sick…very sick. In fact, it has been sick since the first day the government started telling us how to take care of our patients. Up to now, the physicians of this country have not been willing to assume their role—retreating to their own private agendas and hoping the problems would all go away.”
Allison wrapped her arms tightly around her husband as if he were the only hope left. “But, the very patients you say you’re fighting for are going to get hurt.”
“Unfortunately, some will,” he answered, his voice cracking. “That’s the sad irony—putting them through the pain to get the cure, but it’s the only way the guys in Washington are going to listen.” Terrell pulled away, his mind now clear about what he had to do. “One time when I was a kid, and I had this terrible sore throat. So, my mother wrapped me up and took me down to the doctor. After he looked me over, he told my mother he had to give me a shot of Penicillin and that it was going to hurt. Well, I started screaming and trying everything I could think of to get out of having that injection. My mother was beside herself with my going on; so he sent her out of the room. I’ll never forget what he did next. As soon as the door was closed, he turned to me and asked me one question. Did I want to get well?” Terrell sighed, “It’s everything about being a doctor.”

The physicians’ oath ‘Do no harm’ is attributed to the ancient Greek physician Hippocrates, but it isn’t a part of the Hippocratic Oath. It is actually from another of his works Of the Epidemics.

Hippocrates’ Of the Epidemics says: The physician must be able to tell the antecedents, know the present, and foretell the future — have two special objects in view with regard to disease, namely, to do good or to do no harm.

In this work, Hippocrates acts as a prognosticator, raising concerns about not just one malady and one patient, but encompassing the past, present and future of many patients and the maladies they might face.

Following this rationale, this book, When Doctors Finally Said No, came to be. Although fiction, these true, medically related stories weave together a movement that is building barriers between doctors and their patients by using criteria based on outcomes instead of efforts.

The oath, once the bedrock of this still unpredictable science has now become its Achilles heel. Many of those in the federal government, the insurers, the hospital corporations and the bottom-feeders from the legal community feel they can legislate, regulate, administrate and litigate without real concern what harm might come from their actions, because doctors pledged to do no harm.

Hippocrates’ pronouncements laid out an additional duty for doctors beside do no harm and that is doing nothing.

When Doctors Finally Said No is the gripping story of the intrusions into the practice of medicine by the payers, the government, and the large hospital corporations that force physicians into a battle they never anticipated.

Rob Tenery, MD is a Dallas-based ophthalmologist. He and his wife have two children and four grandchildren. When he is not caring for patients or lecturing at the University of Texas Southwestern Medical Center, he enjoys relaxing with his family in the Santa Fe, New Mexico, area.
For more about Dr. Tenery, visit
www.robtenerymd.com.
This is his sixth book.