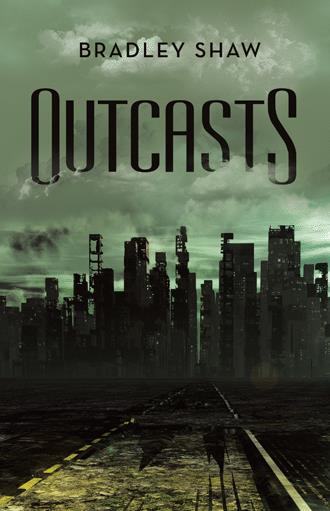 We entered town just as the sun was starting to peck out from the bottom of the horizon. It looked like the coast was clear, so we ran across the concrete road to an alleyway. Upon entering it, the first thing we saw in it was a pile of trash. It was mostly in a black, plastic bag, but there were a few hole ripped in the sides, showing all the fresh leftovers in the bag. I instantly grabbed for the bag. As I did, a tall kid covered in dirt and missing a few teeth came out from behind a nearby dumpster, a stouter, more smart looking kid behind him. The second one help a rifle. I groaned a third time in one hour. I should have known it was a trap. This place was teeming with bounty hunters, who caught members of gangs and handed them over to other gangs for money they could use to buy food and water. My gang never had to worry about water, as there was a stream in the back of the shack. The tall kid walked over. I recognized him instantly. His name was Catlillie, a dangerous thug who joined and broke off from gangs just to learn about them so he could figure out who hated who for what and capture them for money. I knew I was in trouble. He had caught me running away from his yard with some food last week. He threatened to kill me the next time he saw me. I didn’t recognize the second one. “Well, well, if it ain’t my dearest friend, Leroy Hint. I have not missed you since the last time you stole from my property. Put your hands up!” I did as he said. He put an old fashioned six pack handgun like those in western movies to my head, grinning. “Now, let’s start talking numbers.” I gulped. In my five years in the Square, I never have had someone put a gun to my head. Trust me, I seen it happen to others, but never me. It was a first for me, and I didn’t know what to do. Neither did Mikak, who stood next to me, shaking like a leaf. Amazingly, I was keeping surprisingly calm, giving the circumstances. I thought if something like this ever happened to me that I would cry uncle and break down into tears. A voice in my head started talking. It was Gudd’s, his advice about dealing with such a problem popping into my head. If someone very puts a heater to your skull, just play along. Half the time, them heaters aren’t even loaded. Just take deep breaths and don’t make any sudden movements. Keep your eye on the trigger and, if you can’t slip away, make sure you’re clear of the bullet shot before you fight them. “How much do you think he worth?” Catlillie asked the boy with the rifle, spitting a little as he talked. “Honestly,” he said, squinting at me. “He don’t look all that great and he ain’t the most there person I ever meet, if you know what I mean. I’d say about twenty bucks, hopefully.” I know it don’t sound like much, but in the Square, twenty bucks might as well have been a million dollars. “Twenty bucks!” hollered Catlillie, looking at the boy, still spitting. “Are you kidding me?! I’ve gotten thirty out of girls worse looking than this. How ‘bout his friend?” He nodded at Mikak. The other boy looked him over. “Great hair, winning smile, eyes that light up the whole room, I’d say he worth double the hag you have pinned down now.” “You sure, ‘cause if so, I’d sure as hell would like to blast his head off.” Mikak suddenly made his move. He ran at the boy who was apparently some kind of deal maker. They crashed to the ground, rolling around all over each other, grappling for the rifle. Catlillie pointed his six pack handgun at them, waiting for a clear shot at Mikak, forgetting about me entirely. I reached down, picked up a brick, and threw it at Catlillie’s face. It hit him in the nose, breaking it. He sank to his knees in pain. I ran over and kicked the gun out of his hands. It slid over to Mikak, who grabbed it and shot the other boy in the stomach with it. The gunshot rang out loudly across the Square. Catlillie stumbled to his feet, looking at us, taking in the whole scene. He looked between us, the guns, the dead boy’s body, and us again, before brandishing his own knife, swinging it at me. I jumped back, avoiding the blade, just as Mikak shot him in the arm. He winced, sinking to his knees again. I walked over and grabbed his by the collar of his shirt. “Listen to me, now! Don’t you ever again come after me or my gang, do you understand me?!” Catlillie nodded understanding. I threw him onto the ground. He got up and ran down the alleyway. Halfway, he stopped, turned back, spitting (always the spitting) and screamed, “This isn’t over, ya hear!” Then he raced away. I turned back to Mikak. “Come on, we better get moving.” If I had know though, what we were in for that day, I wouldn’t have left that alleyway. Not for twenty dollars.

Following the second American civil war in the year 2100, a brutal empire arises from the ashes, spreading across North America and beyond. In this new world, those who rebel are punished severely—as are their family members. Children of criminals are placed in guarded, abandoned cities and towns called Squares, where they are permanently cast out from society. Life is hard in the Square. Leo Hint ends up in one at seven years old, after his father rebels against the empire. Fortunately, he soon joins a gang that helps him stay alive and build a life over the next five years. Then one day, when he and his friend Mikak take things too far and get caught by a soldier, they find themselves facing the fight of their lives as they try to escape the Square. The boys discover something bigger than they ever expected, and now Leo, Mikak, the rest of their gang, and six new members must save each other. In this first book of a planned series, a teen imprisoned in an abandoned town works with other young people to escape, doing their best to survive in a dangerous, hostile world.

Bradley Shaw is a young author from Flagstaff, Arizona, where he lives with his mother and dog, Phoebe. He has written books for years and has taken many writing classes. This is his first published work. He believes children should be allowed to make their mark in the world and hopes that his stories will be an inspiration for them to stand out.