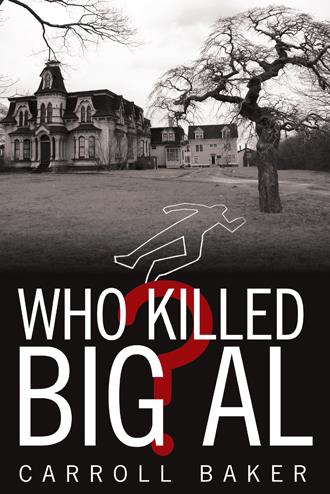 They were in the dark, an almost total blackness. There was no fire in the dining room fireplace, and Foster had previously taken the candelabra away. The meal had begun in such a rush that the candles in the candleholders on the dining table had remained unlit. The heavy rainstorm cast a dark grey black reflection of the sky on the windowpanes, not nearly enough to see by. Only the occasional flashes of lightning illuminated the room where the dead body of Big Al Silver still sat upright in his chair. Moments before, he had been roaring and stuffing himself with the fish appetizer. It was a spooky atmosphere that gave most of the guests a feeling of foreboding and queasiness. One could sense a panic that was in danger of erupting.

Slanting rain pounded the windows and thunder broke loudly. Mixed with these sounds was a chorus of sounds expressing human discomfort. Babs Cunningham and Jackie Le Roir were whimpering in fright, Dorothy Saks was giving tiny moans, and Cheri was crying loudly. Lorraine Hurley’s eye was twitching badly but she bit her lips and made no sound. Some of the men gave an occasional sigh, and others seemed to be breathing irregularly. However, Doctor Armstrong remained unmoved, as did the Constable, both being accustomed to death on account of their professions.

The Constable’s thick accent was French. His voice should have been, but was not, soothing. “Stay calm. Please, everyone stay calm.”

The Baron was one of those breathing irregularly, but when he spoke, his voice definitely showed annoyance: “Foster, where is that candelabra? What did you do…blow out the candles?… Take it away?” He kept talking, as if the sound of his own voice might help to settle his nerves. “Why blow out the candles or take the flaming candelabra away, when we keep having these blasted blackouts? Now we are in the dark with a corpse among us. Have you lost your common sense, man?”

Foster’s voice rang out in the darkness with some indignation at being spoken to in such a manner. “It is in the hallway, sir.”

Foster’s voice said, “Sorry, sir, I was busy serving. I had the candelabra with me in the hallway during the last blackout, in order to see the tray. My hands were too full to bring it back in here at the same time that we were serving the appetizer dishes and the wine.”

The Baron’s voice had a touch of apology, “Well, get it, man, this is no time to be in the dark.”

Babs’ voice was a whine. “Please hurry. Please, please give us some light. This is so distressing. My nerves are frayed, and I can’t bear to be in the dark with a dead body.”

The Constable’s thickly accented voice should have been, but was not, reassuring. “Everyone, I say again, please remain calm.”

Dorothy’s voice was pitched high, with an edge of hysteria. “Constable, thank God, you are here. What are we to do now? Please tell us what to do with this dead man.”

The Doctor’s voice was matter of fact. “The only sensible thing to do is to remove the corpse so that we may continue with our meal.”

Cheri’s voice was full of tears. “Poor Big Al, I wouldn’t want him to see us eating.” Then she again broke into sobs.

Lorraine’s voice was motherly. “Now, now, dear, he can hardly see us if he is dead. But it would be appropriate to remove the body and cover him decently. I am so sorry for your loss.”

The others joined in with condolences, and Cheri’s sobbing abated.

Foster, who was in the process of feeling his way along the wall to the doorway so that he might enter the hall and retrieve the extinguished candelabra, was practical. “May I suggest that we place him on a flat surface like the kitchen table, and cover him with perhaps a large tablecloth. However, the problem will be moving him. He is a very big man. How are we to get him out of the dining room?”

Trish said, “The serving tray is large and on wheels. I’ll hold it steady; put him on that, and you can wheel him out.”

The Major and the Doctor groped their way to the body and began attempting to lift it under the arms. Both men were grunting under the strain, and failing to lift the corpse of Big Al onto the serving tray. Trish was holding the tray so that the wheels would remain still. But it was no use; Big Al could not be budged.

The lights came back on. There were audible sighs of relief. Foster entered a moment later with the candelabra. He placed it in the center of the table and relighted the candles, just in case.

“I say, this fellow is big indeed. All give a hand,” the Major said. And all the men except the Baron and the Constable struggled to lift the corpse onto the large serving tray on wheels.

The Baron said, “Lead the way, Foster, that’s a good chap. Let’s get this unpleasant sight out of the dining room and into the kitchen where he can be placed on the table and covered.”

“Couldn’t we put him somewhere else?” Trish said. “I don’t want him on the table in my kitchen.”

The Constable spoke up. “I don’t mind placing the body in another room. The kitchen for now…until I familiarize myself with these surroundings.”

They had not consulted the Constable, who should have been considered the prime authority, nor had they given him the respect called for. Once the lights were back, once they’d finally gotten a good look at him, they seemed to dismiss the Constable. Even Dorothy, who had asked him earlier about moving the body, had begun to ignore him.

On a lonely island off the coast of Canada stands a vast old Victorian house, inhabited by a baron with a mysterious past, his housekeeper, a maid, and his devoted butler. The baron is rumored to be incredibly rich, but he suddenly decides to sell part of the island as a resort. Eight carefully selected prospective buyers—a wealthy but motley crew—arrive to spend the weekend exploring the property. Before the baron can give the visitors a sales pitch, one of them dies—and it looks very much like murder. A constable from the mainland, an odd little fellow who idolizes Hercule Poirot, had been invited to talk about security, but he must now investigate Big Al’s untimely death instead. There is a decided lack of cooperation from the suspects, and the constable soon discovers that no one is what he seems. Not only does everyone have a dark secret, but each one also has a motive for murder. Can he solve the case before someone else is killed? Who Killed Big Al? is a quirky homage to Agatha Christie, filled with twists, turns, suspense, and British humor.

Carroll Baker starred in more than forty Hollywood and European films, including Tennessee Williams’s Baby Doll, which earned her an Academy Award nomination and skyrocketed her to international fame. While performing in the London theater, she began to pursue her other passion: writing. She is the author of three other published books and currently lives in New York City.