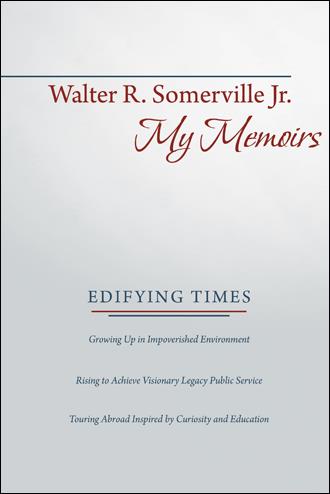 This book is about an African American growing up in an impoverished community, working at tedious jobs at an early age to help pay family bills, dreaming of becoming a professional baseball player, working at a high level for 21 of 54 years in the federal government and traveling abroad after retirement. Growing up as a teenager, my family of eight was poor, but we were too optimistic about the future to think we were poor.

I played baseball in high school and non-professional baseball after gradation. I became good at playing baseball owing to the tutoring received from players of a professional Negro baseball team, the Baltimore Elite Giants; but that was not enough to become a professional player in major league baseball, although I was told that two major league teams had inquired about my baseball talents.

I served in the United States Air Force for nine years, completing a one year tour of duty during the Korean conflict. Afterwards, I worked over 44 years in the federal government rising from an entry level position to a senior executive service (SES) position in the United States Coast Guard, the equivalent of senior Rear Admiral in the service. I served in the SES position, with the organizational title of Assistant Commandant for Civil Rights for 21 years.

In 21 years as Assistant Commandant for Civil Rights, I led coast guard efforts to increase the representation of minorities in the service and develop a coast guard organization that valued diversity. Coast Guard had had limited contact with minority communities. I reached out to presidents of minority associations and Historically Black Colleges and Universities HBCU'S, the National Urban League (NUL), National Association for Advancement Of Colored People (NAACP),National Association for Equal Opportunity in High Education (NAFEO), Hispanic Association of College and Universities (HACU) and other less known minority organizations. We collaborated on developing partnerships with a strategic objective of supporting their missions and at the same time supporting coast guard mission to attract minorities for consideration in joining the coast guard in a military or civilian capacity.

As part of the agreements with these associations, I arranged for coast guard speakers and exhibits to support their annual conferences; this was a means of sharing information relative to our respective partnership objectives. Working with the NAFEO and HBCU'S, we developed the coast guard Recruiting Initiative for the 21st Century to attract minorities to the Coast Guard Academy and other officer procurement programs. I served on the Coast Guard Academy Board of Trustees.

Additionally, I established the coast guard first Junior Reserve Officer Training Corps (JROTC) in Dade County, Florida, the Maritime and Science Technology Academy (MAST) in 1989 and developed a coast guard Partnership In Education Program that had contacted more than 2,000,000 students at the time of my retirement in 2004. To comply with Equal Employment Opportunity (EEO) Commission directives, I initiated a comprehensive program to integrate elements of a Model EEO Program into coast guard operation policies and practices to create a positive civilian work force free of discrimination.

More importantly, when I assumed the position of Assistant Commandant fr Civil Rights, the civil rights program was not looked upon as one that added value to coast guard mission accomplishments. It was perceived as a program that was reactive and for which military members performing operational missions need not pay much attention to, as there was no accountability. This perception was effectively changed during my tenure as Assistant Commandant for Civil Rights. I formulated and issued a dynamic Civil Rights Doctrine with an organization and staffing structure and policies and practices that were integrated into coast guard operational mission policies and practices that held all military and civilian members of the coast guard accountable for their actions or inactions in adhering to the policies and practices of the civil rights and equal employment opportunity programs, regardless of grade, rank or status in the coast guard. This policy guidance was published in the Coast Guard Equal Opportunity Manual and signed by me, the Assistant Commandant for Civil Rights.

My work in the coast guard was very meaningful and engendered a lifetime passion in me to do whatever I can to make a difference in the lives of other ordinary people. In 2007, I established an endowed scholarship fund in my name at the University of Maryland University College for students who demonstrate a need for financial assistance to get a college degree in Business Administration.

Since retirement, my wife and I have enjoyed an active and healthy life maintaining a rigorous daily fitness program, attending basketball and baseball games and traveling abroad. Our recent tours to France, Costa Rica, Dubai and China have been exhilarating, educational and filled with memories we will never forget. I wrote about some of the history, customs and traditions of these countries and their people in the book.

But with a young daughter to take care of and bills to pay, he enlisted in the recently integrated Air Force in 1951—never knowing that he’d spend the next fifty-four years serving his country.

After serving a tour of duty in South Korea, he returned to the United States before being honorably discharged and then re-enlisting to work at the Air Force Reserve Center in Baltimore. Eventually, he became a civilian Air Force Reserve technician at Andrews Air Force Base before taking a job at the Federal Aviation Agency.

He went on to work other jobs before becoming a chief with the Coast Guard’s Civilian Equal Employment Opportunity Division, in 1970. Later, he was appointed to a Senior Executive Service position as chief of civil rights, the military equivalent of rear admiral in the United States Coast Guard.

Join the author as he looks back at a lifetime of making a huge difference in the lives of ordinary people—especially women and minorities—and living an active life after retirement in these memoirs.

Walter R. Somerville Jr. did not let growing up relatively poor prevent him from becoming assistant commandant for civil rights in the United States Coast Guard. In his fifty-four years of public service, he supported a Coast Guard culture that values diversity, a twenty-first century recruiting initiative, the creation of the Coast Guard JROTC program, and other initiatives. He is a graduate of the University of Maryland University College and a program for senior managers in government at the John F. Kennedy School of Government at Harvard University.