True Stories from the Golden Age of the Game 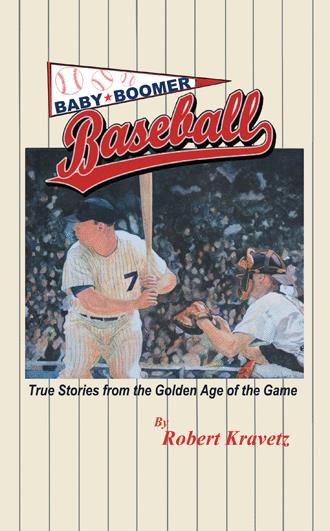 Above us, Mark yelled out of his upstairs bedroom window: “Bob, if you hurry you can hear Mickey’s at bat!”

Mark’s voice caught me off guard. I yelled, “What?”

Mark yelled, “Hurry! Mickey’s up! If you peel, you can catch him!”

I took off like a shot. Thank God, I was all warmed up! I estimated that it would take me no more than 15 seconds to get through the front door of my house, run down the short hall, and turn on the radio in my bedroom.

Suddenly, I had the clearest premonition of my baseball life. If Mickey is batting left-handed, he is going to hit one. It was so clear that I sort of verbalized it. Mickey had hit many a lofty, left-handed “Ruthian” shot, but I lived to see him swing from the right side, with

that raw power like nobody else had ever displayed.

My father instantly saw me tear in and down the hall. Streaking past, I simply yelled “Mickey’s up!” He understood.

My radio was on in a flash and of course already tuned to the right station. The first words I heard were, “The right-hander is rubbing up the ball!”

I cringed, smiled, and said, “Oh my God.” I couldn’t believe that the announcer would even say that, and at this exact moment in my life! Most often, announcers would refer to “the pitcher” or use his name. That right-hander was Bill Fischer of the Kansas City A’s.

Next came the words that I have the clearest recollection of in my life:

“Mantle swings and that ball is gone and is still raising! I think

it is out of Yankee Stadium! Oh my God, I think it is OUT OF THE STADIUM…. then it finally it hit the facade with a tremendously audible ringing thud just below the top of the facade!”

I sat on my bed with tears of awe. Mickey had hit the ball so hard and the ball flew so fast that it would have left the park if Yankee Stadium had been built just a foot or two deeper. The ball traveled nearly 400 feet away and soared almost 120 feet high before hitting the facade with a BOOM as they heard at Gettysburg.

After a few minutes of listening to the cheers, I suddenly got a different feeling. I was pissed that the ball hadn’t flown out. I was aware of that possibility because this was now the second time the

ball had hit the facade. Mark and I often debated if was even humanly possible to hit a ball out of Yankee Stadium, and my conclusion was that only Mickey could do it!

Baseball has enchanted generations of players and fans with its charm and has been a constant in American life since the nineteenth century.

Growing up as a boy in the 1950s and 1960s, Robert Kravetz learned the art of fending for himself on the baseball diamond. There, he and fellow players settled arguments and honed their baseball skills, learning the intricacies of a beautifully simplistic game.

His baseball hero—and the hero for millions of other boys—was Mickey Mantle. At seven years old, he would rip open the morning newspaper to see if Mickey had beaten out Al Kaline for the runs batted in part of the Triple Crown and Ted Williams for the batting average honors.

In Baby Boomer Baseball, Kravetz relives his youth, sharing fascinating tales from the golden era of baseball and observing the game’s changes through its steroid era and beyond.

Whether Kravetz is drawing on his awe for the game as a boy or on personal discussions with Gary Carter, Hank Bauer, Tommy John, Bob Mathias, Clete Boyer, Tim McCarver, and the former director of research of the National Baseball Hall of Fame, Tim Wiles, he shares stories that will rekindle your love for America’s pastime.

Robert Kravetz fell in love with baseball as a boy in the 1950s and 1960s. A baseball historian, he is also the author of Where Have You Gone Mickey Mantle? He has supported various Little Leagues, Challenger Baseball, Children Awaiting Parents, and other worthy organizations that benefit children with book proceeds. When Gary Carter met the author in Rochester, New York, he was so delighted with his baseball stories that he wrote the foreword to Baby Boomer Baseball.