What Girls Are Made Of 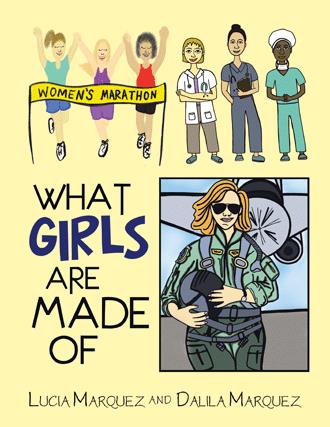 Once upon a time...
Around the time your grandmother was a teenager, in 1966, there was a girl who liked to run. She liked to feel the strength of her muscles and the air in her lungs. It was as close as she could get to feeling like she could fly. She tried to register for the Boston Marathon, one of the most famous races in the world, but they wrote her a letter saying women weren't physically capable of running a race.

Once upon a time, women and girls were told they couldn't run marathons, become doctors, or become fighter pilots because they weren't smart enough or strong enough or they couldn't be mothers and have jobs at the same time. It took many women working together to change these ideas, change the rules, and show the world what girls and women can accomplish.

In What Girls are Made Of, authors Lucia Marquez and Dalila Marquez offer a look at the accomplishments of three women: Roberta Gibb, who was the first woman to run the Boston Marathon; Patsy Mink, the first minority woman to be elected to Congress who worked toward women's rights in academics; and Tammie Shults, among the first women fighter pilots.

This book for young readers shares the accomplishments of three women who didn't listen when others said, "Girls can't do that".

Lucia Marquez has always loved reading. She finds inspiration in the stories of women who achieve against all odds. Dalila Marquez enjoys exploring colors and making things. She loves being present to enjoy time with family and friends.