The Trial of St. John

Was the Gospel of John Responsible for the Holocaust? You Decide. 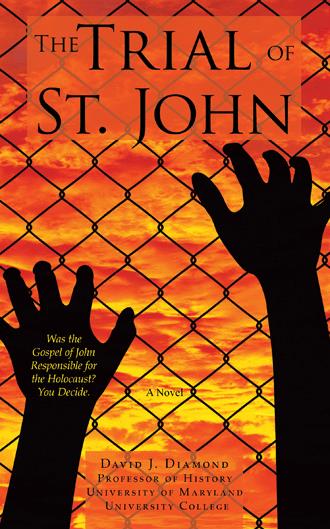 “You guys are going to get in a lot of trouble if you don’t let me out of here right now,” Jenny demanded.

“First we have to settle a bet,” Luke said calmly.  “See, I said you were Jewish, and Pete bet me you were not.  So who’s right?”

“See, that’s the trouble with you Jews,” Luke continued in a teasing voice.

“You don’t care about other people. Tonight is not just any Friday night.  It’s special.  Tell her John what special Friday this is.”

“Tonight is Good Friday,” John answered from the back seat.

“See,” Luke smiled as he watched Jenny in his rear view mirror.  “You learned something tonight. Now, I’m going to give you a test, a very important test.  If you pass the test, maybe we’ll let you go.  Tell me why all good Christians celebrate Good Friday?”

“It has something to do with Easter,” Jenny said nervously, not really sure what Good Friday was or why these boys were tormenting her.  At least, no one had hurt her, not yet.

“You’re not sure are you?” Luke taunted her.

“Not exactly,” Jenny admitted.  She was trying to figure out where the boys were taking her.  They seemed to be driving around aimlessly in Highland Park.

“It’s the day that Jesus Christ was crucified.”

“Jenny.”  She noticed her voice was trembling.  Her whole body was shivering.

“Please let me go,” Jenny cried.  Tears were streaming down her cheeks.

“Take her home Luke, we scared her enough,” Pete said.

“Look chicken Pete, just shut up.  You lost the bet, so this is my show,” Luke said angrily.  “Now Jenny, you didn’t pass the first test, but to show you what a good sport I am, I’m going to give you another test, another chance.  Tell us who killed Christ?”  Luke watched in the mirror as Jenny dried her eyes.

“The Romans, I think,” Jenny said between sobs.

“Well, you’re almost right,” Luke conceded.  “The Romans did it, but do you know why?”

“I’ll tell you why little Jew girl.  The Jews told them to kill Jesus.  The Jews screamed for His blood.  It’s all in the Bible, the whole story.  That’s why everyone hates the Jews.  Didn’t you know that?  How stupid can you be not to know the Jews killed Christ?”

A twelve year old Jewish girl is kidnapped by a gang of boys on Good Friday. They tell her the Bible claims all Jews are responsible for the crucifixion of Jesus Christ. They seek revenge and tie her to a cross of Jesus in a church courtyard.  She is stripped naked and sexually assaulted. Her father is a history professor and is horrified by what happened to his daughter. He searches for the reasons for the hatred of Jews and finds it in the words of the Gospel of John in the New Testament. He writes a book accusing St. John of lying about the Jews and being the source of  anti-Semitism that led to the massacres of Jews throughout the centuries culminating

An extreme Christian organization does not want a book published that criticizes the Holy Bible. Kidnapping and attempted murder are used to stop the publication of the book. Embedded in the exciting story is a fictional trial of St. John.  John and others in the story defend the Gospel of John.  They deny that John’s words are responsible for the Holocaust. Both sides are fairly represented.  You decide if John is guilty or innocent of the murder of  the Jews since the birth of Christianity.

This is a provocative story with memorable characters and an intriguing plot. This controversial book is destined to trigger an intense national debate.

David J. Diamond is a history professor at the University of Maryland University College who holds a Master’s Degree in international relations from the University of Chicago. Prior to his teaching career, Mr. Diamond was president and CEO of Sam Diamond Knitting Mills. He and his wife, Jeanne, have three children, six grandchildren, and enjoy traveling the world.