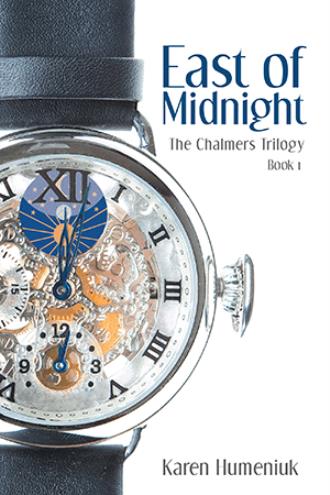 Cameron followed Esther to a grassy patch next to a fieldstone wall. Lying on his back, he watched the sky and waited for her inevitable interrogation.

“Cameron, what happened in Wyoming?”

“Well, you talk about it all the time, but you came back in worse shape than before you left. That’s a disconnect. If it was that great, why are you so miserable?”

“And that’s why you called me this morning,” Esther smiled. “Care to explain?”

“You don’t fool me,” she waited, studying him. “Neil agrees with me.”

Oh. “Did either of you plan to talk to me about this?” He arched an eyebrow then counted the clouds.

“He thinks it’s your dad, that you had a big argument. Maybe, but I’m not afraid to press you, not after you called this morning.”

He glanced at her then snorted. His family problems were not up for discussion.

“Something’s eating at you, Cameron. It’s been gnawing away not just this fall, but for almost a year. Yes, it’s been a whole year.”

A year ago? What had she noticed? Regardless, whatever she imagined needed to be ignored. He watched the contrail of a plane inch across the sky. She’d give up soon.

A girlfriend? Lydia? He could wish. Cameron watched the contrail grow longer.

“I knew it,” Esther blurted. “Why do you do this? Why do you get involved with girls you don’t love? If I didn’t know you as well as I do, I’d listen to my friends who wonder why I agree to be my lab partner.”

They do? He glanced at her then turned back to the plane, etching a long white line across the sky.

“You’re not a totally shallow guy,” she continued, “but you act like you are. Don’t you care about what people think?”

He glanced at her, grimaced, but as he looked away, her mouth dropped open. “You do like someone,” she declared. “Don’t you . . .? But she doesn’t like you.”

Score one for Esther.

He met her eyes, no longer able to force a smile. Esther jumped onto her knees and leaned over him. “I knew those girls who hang on you weren’t the kind of girl you’d like. I was right!”

For a long cold second, he met her stare then looked for the contrail.

“You know,” she leaned closer. A faint grin flickered. “I always imagined that I’d be jealous if you ever found someone you like, but I’m not . . . I am dying of curiosity. Tell me about her.”

How could he tell her about Lydia? His brow knit as Esther leaned closer, blocking the sunlight. Maybe, he should say something, but only a little. “You can’t tell anyone.” His voice sounded harsh, but it emphasized his point. “Neither Neil, Trace or Patrick know about her. And I want it to stay that way.”

“Why? They’re your best friends.”

“It’s my business. Not theirs.”

“Do you think you’re the only guy to get shot down? I assume that’s what happened. Well, think again. My friends would have my head examined if I accepted a date with you.”

His frown vanished. “Why?”

“Because they don’t want me to be one of your ‘girls.’”

“That’s what they think. Still, I can’t believe you like this girl and haven’t resolved it.”

“Well, do you care to explain why you called this morning?” She leaned an inch closer. “And why were you parked in front of Dr. Krasotkin’s house?”

Cameron’s jaw clenched as he watched another plane cross the sky. “We went to high school together. Her name is Lydia.”

He grinned but didn’t look at her. “She’s a Dukie.”

“No!” she gasped. Instantly, her eyes narrowed. “No! You date bimbos.”

“What do you mean?” He laughed and leaned closer.

“If you dated a smart girl,” cold steel glistened in her eyes, “and it wasn’t me, I’d post your sorry hide on Venable Hall.”

For a moment he broke into robust laughter, then sat up, sending her up and onto her heels. He leaned close, far closer than usual. His heart raced despite a determined effort to appear contrite and humble. “I need a favor . . . I’ll be in your debt for life.”

Esther winced and leaned back. One hand reached for the ground behind her, steadying her. Again, her eyes narrowed, examining him, but he didn’t flinch. “What kind of favor?”

“Last spring, you said there were Robertson Scholars from Duke in a class. Right?”

“I could ask Mom to call her mom, but that would complicate things. Maybe one of your friends knows her.”

Cameron pulled out his puppy-dog smile. Her indignation ebbed, but she hadn’t agreed. As seconds ticked by, reality sank in. Though Duke wasn’t large, Esther probably didn’t know someone who also knew Lydia.

“Okay. I’ll do it. But I can’t promise anything. Tell me about her, at Duke that is. What’s her major?”

“Her last name is Carpenter. That’s all I know.” His cheeks flushed.

“You’re kidding.” She flashed a smile as delight danced across her face. “Cameron, you’re pitiful. You’re nuts about her, but you don’t even know her major.” She shook her head. “And to think I agreed to this. You don’t need a friend. You need a nursemaid.” She stood and extended her hand. “Come on, the lab awaits us, but first, I’ve got to run over to WalMart.”

Two hours later, Esther found Cameron in the chem lab, studying. She plopped her books down on the table next to his laptop, but remained standing, smiling at him. Finally she sat down. Pressing her shoulder against his, she whispered. “You owe me.”

His father had kept his word. He had not attended any part of Cameron’s graduation. Afterward, every discussion between Cameron and his father had turned into an argument—not explosive ones, but the seething writhing kind that slowly blistered the relationship. Such had been the argument about Wyoming. Though Uncle Nathan’s offer had likely been well intended, it gave Cameron’s father a veiled excuse to send Cameron to the farthest end of the world—a dubious blessing.

Cameron quickened his pace as he crossed in front of Carroll Hall, but a sudden vision slowed his feet to a stop. No one stood before him, yet every muscle slumped as for an instant he recalled Grandpa’s smile, but the apparition flickered and vanished. The rain battering his skin stung, but the memory singed his soul. Grandpa was gone.

Cameron stared into the empty air a moment longer, then forced one foot forward and then the other, pulling him toward the chemistry building. Grandpa had guided him, even gently chastised him, but in everything, Grandpa had loved him. He had talked about the things Cameron would face, about love and faith, but mostly about the future—Cameron’s future without Grandpa: an unimaginable future that had become the present.

He lengthened his stride as the rain beat harder against his head. Soon it ran down his back and soaked through his shirt, plastering it against his skin. He tried to think of something, anything else. To his horror, Lydia and New Year’s Eve came to mind. He remembered her gaze, cold and distant, as she closed the door. Though as beautiful as Rita, Lydia was like Esther—and Grandpa. She had seen right through him.

A native of Durham, North Carolina, Karen lives with her husband John in Greenville, South Carolina. Karen earned a bachelor’s degree in biology then worked in cancer research and clinical microbiology before earning a master’s in landscape architecture.

Now retired, she enjoys doting on her grandchildren.

This is her first novel.