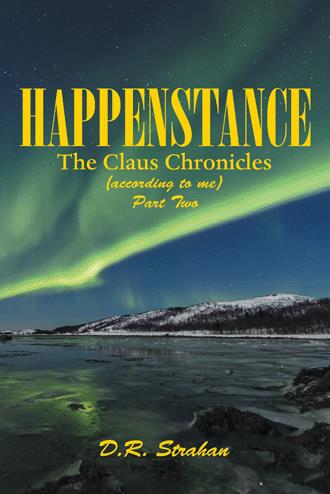 Robye picked up a long pointer and turned toward the board

As quickly as light spreads through a room, it was consumed with static.

“What’s going on in there, Robye,” Hermes called out.  Stopping at the door, he looked inside.  “It must be an emergency from the other end.”

While screeches and squawks of electronic air bounced against the walls, a rough and raspy voice blared out, exploding through the space.

“Hermes…, Robye…, one of you, contact me immediately,” the voice commanded.

“An imperative situation has developed.”  Santa’s voice crackled, fading in and out.

“Wha…, okay,” he said, quickly moving to one side.

Hermes stopped outside the door.  “Robye, do you need any help?”

With eyes glued to the control panels, Robye said, “I think I’ve got it, thanks.”

A three-dimensional image began to develop.

Tom stood, mesmerized.  His eyes flashed between the formation and Robye’s capabilities at the helm.  “Wow”, was all he could utter.

While continuing to stabilize the form, a little smile crooked in the corner of Robye’s mouth, as Santa materialized beside him.  “It is good to see this equipment is still working.  We haven’t used it in a while.”

“I’m right outside the door,” Hermes said, stepping into Santa’s view.  “What kind of urgent situation brings you here?”

Robye turned to Tom and swiped his ear with a grin.  “Haven’t lost my touch, huh?  Good feeling, you know.”

Tom asked, scratching his head, “did I see what I think I saw?”

“We don’t use this equipment much, anymore.  Old technology, you know how that goes,” Robye grinned, “but once in a while, we find it still useful.”

Hermes voice broke the spell.  “Les and Freddie were in the cellar and are probably in the tunnel by now.  They have a lot of work ahead of them; four or five hours, I’m guessing.”

“Thanks for the update, Hermes but the cellar project is not why I am here,” Santa pointed out.  His impatience was quite evident.

“You sound frustrated, Santa, what is going on,” Hermes asked.  “The big ice machine should be at the other location by now.”

“It has been there for a while; Hank and Barnie are there with it,” said Santa, “but the tunnel caved in.”

“What about Hank and Barnie,” Robye interrupted, “are they okay?”

With staggering movements, Santa’s head turned to Robye.  “They did get out but had to make a run for it; a close call, I was told.”

Santa turned back to Hermes.  “The ice machine was still pumping into the fault when it went down.”

“Did they turn off the engine,” Hermes asked.

“It will burn up the engine,” Hermes cried.  “Pushing ice into an already filled hole will ruin the engine.”

“Hermes, they could not turn it off,” Santa said, slightly raising his voice.  “Those two boys had to jump or go down with it.”

“Of course,” Hermes said, “they had no choice.”

“You see the situation, Hermes,” Santa said, grimly.  “Two machines have been inadequate for this season.”

“From my reports, the dark ice collapsed under the big one and recovery is impossible.”

“…and it was our main machine,” Hermes muttered.  “You know it will take weeks for the machine shop to finish building the new one.”

“Should there be no other outbreaks, my concern now is the north east side of the city.”  Santa explained.  “It has little defense; only the snow bobbies at this time.”

“We have never had to be concerned with North East Corner, before,” Hermes pointed out.  “Have any ice moles been seen there?”

“There have been no reports of any,” Santa said, “but it is being checked, as we speak.  There seems to be a need to expand on our previous experiences.”

“The North West Corner has always been their place of choice to attack,” Hermes said.

“…and they have been vicious, this season,” Robye pointed out.

“You know what will happen if we find they have spread.”  Santa said.

“I see where you’re going with this,” Hermes muttered, “and it makes my skin crawl.”

“The foundation of Happenstance could be in jeopardy,” Robye said, quietly.

Turning back to Robye, Santa added, “we are in an extremely dangerous situation; we are fighting for our survival.”  It was long seconds later when he continued. “Not only would Happenstance be lost but so would Christmas.”

Happenstance is a small town located in an underground ice-enclosed cavern. Two weeks before Christmas, everyone busily completes the final touches on shopping and planning attire, as well as practicing new dance steps for the dinner finale of the year. In anticipation of Santa’s Christmas Eve ride, excitement seems to be everywhere … until Uncle Hermes goes missing.

The door to Mobil Land has been left ajar, and its interior is in shambles. These are not habits Uncle Hermes would abide. Robye Jax is the son of one of Happenstance’s founders. From early childhood, he has been educated in the discipline of scientific expression, so he recognizes the signs. There is no question: the ice moles are on the move.

Every twelve years, the ice moles migrate through the cavern walls to reproduce. Forming into colonies of thousands, they activate in sync and begin a chaotic activity called “whorling.” The snow bobbies are capable of detecting the eminent whorling event, and they’ve been sending Robye frantic messages of warning. Oh, yes, Robye knows why Uncle Hermes has gone missing, and he now must get him back before Christmas is destroyed.

For Diana Roberts Strahan, the process of developing an idea into a product has always been a passion, whether she is turning a piece of wood into a cabinet, fabric into a dress, or words into a novel. The excitement of the vision brought to reality is the ultimate reward.