They Called Him Yeshua: The Story of the Young Jesus 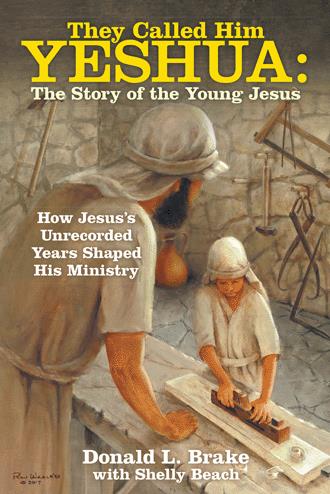 At the cock’s crow, Joseph’s eyes flew open. He grabbed

his dagger and jerked upright, then relaxed at the sight of

the golden aura of dawn on the eastern horizon. The aroma

of freshly baked bread drifted across the rooftop, and he

moaned and slunk back in a heap on his mat.

Through one slitted eye, Joseph glimpsed the amethyst

his gaze to the rooftop sleeping quarters he shared

Nathan and Cleophas still slept. Joseph sighed at their

snoring. The two seldom stirred to the sound of the cock’s

crow. How fortunate to be younger brothers.

rise and fall. His brothers seldom enjoyed the carefree sleep of boys

since they’d begun men’s work in the family’s fi elds. They

were growing up—but then, everyone’s life had changed

since Matthan had left. But the responsibilities of the eldest

did not fall on Nathan’s and Cleophas’s shoulders.

Joseph’s stomach twisted with the familiar ache, and

he rolled onto his back and stared up at the fading stars.

Was Matthan looking at the same sky this morning? Was he

safe? His older brother had left home three months ago, and

the family had not heard a word from him. Had he joined

the rebels? They all suspected he had, even though no one

talked about Matthan. Abba Jacob had forbidden the family

Joseph rubbed his stomach to ease the familiar ache.

Then he stood and straightened the simlah Ima had lovingly

sewn to serve as his outer garment and blanket. He stepped

over Nathan and crept down the steep stone stairs along the

exterior of the family’s small row house and walked toward

the door into the kitchen as he prayed.

Yahweh, protect my brother. Watch over him, wherever

his heart has led him.

The aroma of Ima Naomi’s brown bread made his mouth

water as he pulled open the rough wooden door, ducked his

head, and stepped into the golden glow of burning oil lamps.

He blinked for a moment, and familiar shapes emerged

in the lamplit haze. Little Miriam and Keturah, one bent

over the grinding wheel and the other at the smoking

tannur along the back wall of the tiny kitchen, were too busy

working to see him slip through the door into the kitchen.

But Ima Naomi, her round face red from the heat of baking,

sensed his presence and turned from the steaming

bread she had just pulled from the clay tannur. She greeted

Joseph with a peck on the cheek.

“Why so early, my son?” She bustled between rough

“The flour must be finer, Keturah,” she called across the

room. Joseph had learned that Ima could command more people

than a Roman centurion and remain calm.

“If you skimp on the grinding, beautiful daughter, the

bread will be coarse.”

Joseph caught his sister’s shy glance in his direction,

and her cheeks blushed a sudden pink. He winked, assuring

her of his brotherly delight in her, and she turned back

to her grinding. Since Matthan left, Joseph was the oldest,

and his little sisters tried desperately to please him. And he

wanted to assure them he loved them unconditionally. The

girls had captured his heart when they had been born, an

And soon their home would gain another woman.

Joseph’s thoughts drifted as he stared toward a small room

He felt a playful jostle of his shoulder. Ima had stepped

away from her baking at the tannur and stood at his side,

“You’re thinking about Mary, aren’t you?”

Joseph’s neck and cheeks grew warm as his sisters

Ima’s arm encircled his waist. “When your eyes spark

like flint against flint, I can see that Mary is occupying your

He kissed her forehead and whispered, “The sparkle of

flint against fl int is but a shadow of what I feel for her, Ima.”

She threw her head back and laughed, lines crinkling

Behind him, on the other side of a woolen curtain in the

“My wife, have you started the Shavuot celebration without

Abba Jacob shoved aside the curtain and rubbed sleep

from his eyes. Tying the cord of his sleeping garment around

his generous waist, he stretched his hands overhead with a

yawn, his fingertips brushing the straw-plastered ceiling. He

was an imposing man, a head taller than most Galileans.

Jacob strode across the kitchen and, with a good-natured

growl, grabbed Keturah and buried his beard in her neck

as she squealed. Joseph smiled as he watched his father’s

came with a smile and a fl ash of pride. Jacob ben Matthan

was known throughout Nazareth as an honorable

man and exemplary abba. Joseph guessed that was why it

had hurt so when his firstborn had abruptly left the family

at Ima. “Careful, or you’ll be my next victim.” In two steps,

he closed the distance and kissed Ima. “Good morning,

I want to love Mary like that—to protect her, show her

tenderness, and look at her that way.

A question tugged at Joseph’s thoughts.

But will I be a good husband like Abba?

Joseph was painfully aware that in just twelve short

months, his qualities as a husband would be tested.

Brake and Beach invite the reader to “time travel” into the first century, the world of an ordinary family facing extraordinary challenges, as they grapple with young Jesus’s developing self-awareness and preparation for His divine mission.

“With biblical and historical accuracy, insightful sanctified imagination and brilliant storytelling, Brake and Beach foreshadow what we know with certainty from the New Testament. Get ready for epiphanies aplenty.”

“In these pages, you are welcomed inside the home of a young son of Israel who is “growing in wisdom and stature.” Do step inside. Smell the morning bread baking. Feel the daily tension living in small-town Nazareth where the brutal Roman military is stationed. Reﬂect on the love, and the fear, and the faith of a family living amid oppressive pain from multiple sources—politics, the economy, and religion. And see the young boy blossom into the grown man who is the Savior of the world and its Deliverer. “I want to know my Lord more intimately. Don Brake has helped me. Reﬂecting on some of the pages here, I walked today where Jesus walked.”

—Stu Weber, pastor, author, and retired US Army awarded three Bronze Stars as a Green Beret in Vietnam. He is a best-selling author of several Gold Medallion ﬁnalist books.

“Brake writes as a scribe, communicating the scenes as they’re happening, yet making readers privy to under currents with powerful ramiﬁcations. Yes, this is a novel, but it is also devotional, study, and inspiration to draw us nearer to the One they called, Yeshua.”

The author’s experience as president of the Jerusalem University College (previously Institute of Holy Land Studies) has given him insight into the historical and geographical background of Israel and the life of Christ.

Dr. Brake has led tours to the Holy Land and has taught the life of Christ and the Bible’s historical/cultural backgrounds for more than thirty-five years.

Dr. Brake has written fifteen articles for the St. Louis Metro Voice, has published the Wycliffe New Testament, and has written various mission articles for magazines. His book A Visual History of the English Bible was published in 2008 (a 2009 Evangelical Christian Publishers Association Christian Book Award finalist); A Monarch’s Majestic Translation, in 2017; and A Visual History of the King James Bible, in 2011 (with Shelly Beach; also translated into Portuguese as Uma Historia Visual Da Biblia King James), a commemorative edition celebrating four hundred years of the King James Version. His major article “Versions, English” was published in The Interpreters Dictionary of the Bible, vol. 5, and he wrote Jesus, a Visual History with Todd Bolen, published in 2014.

Shelly is an award-winning author of eight books of both fiction and nonfiction. She served as managing editor of Zondervan’s Hope in the Mourning Bible (Fall 2013) and was one of three writers of Zondervan’s NIV Stewardship Bible, as well as a contributor to Tyndale’s Mosaic Bible. She is cofounder of the Breathe Writer’s Conference and the Cedar Falls Christian Writer’s Workshop and speaks nationally on a wide variety of issues and presents seminars for Daughters of Destiny, a national women’s prison ministry. She is cofounder of PTSD Perspectives and presents educational seminars on posttraumatic stress disorder to medical and mental health professionals, counselors, social workers, law enforcement officers, child advocates, educators, and other professionals.