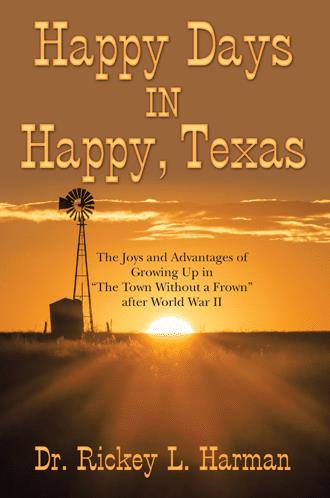 What ended the economic "boom times" in Happy? It seems that "a perfect storm" occurred in late '60s and into the '70s that changed the town from a steady growth to a rapid decline. Today, only businesses that provide basic services remain open such as a grain elevator, a gasoline service station, the post office, and the local bank. A senior citizens' building stays busy most days of the seek. So, what transpired that so rapidly changed this thriving community into a downtown of empty storefronts?

The economy of the small farming community rested upon the success of the farmers from year to year. Irrigation from the Ogallala Aquifer became the driving force behind the success of most of the farmers. With the cost of energy remaining cheap and the irrigation water very plentiful in most areas, the economy of the town remained very good. However, in the late '60s, energy prices escalated, and the water table dropped, and cheap irrigation water ceased. In most fields, not enough cheap water remained for farmers to make a living. Many converted to dry-land farming, so farmers needed more land to make a living.

Two other factors also affected the number of people living on farms. Farmers grazed much of their wheat since they could make more money on fattened cattle than on commodities. Prices for commodities did not keep pace with inflation. Also, the U.S. government expanded its farm subsidy program of paying farmers not to raise grain because of the glut on the world market which kept the price down. Therefore, many farmers, especially as they grew older, put much of their land in federal subsidy programs.

Transportation also played a role in the decline of Happy during these years. The Santa Fe railroad provided Happy with two daily passenger trains (and freight service) until about 1965 when service discontinued. Continued automation by the railroad resulted in closing the local depot in the early '70s. About this same time, the Greyhound bus service also shut down. Highway U.S. 87 running through Happy received the designation as an interstate. With the completion of Interstate 27 in 1980, all highway traffic no longer slowed down through Happy. All traffic now went around Happy, and this forced people to take an exit to come to the community. Therefore, most of the businesses on the old highway that depended on commercial highway traffic gradually closed.

Many of the store owners established their businesses during the '20s - '40s. These people reached retirement age and were ready to close shop. Their children, along with potential buyers, could not make a living because of the decrease in potential customers. One by one, the stores gradually closed as the owners retired thus creating vacant buildings. In some cases, the opening of large discount stores in neighboring cities helped to speed up the closings. With the retirement of these business owners including Dr. Robinson the town doctor, Happy lost most of its' leadership. No chamber of commerce existed, but these men unofficially served in that capacity to keep the town moving in a positive direction. The grain elevators, the major businesses in town, also went into major decline for two reasons. Dry-land farming and less land in cultivation resulted in very small harvests. Also, the U.S. government discontinued its program of paying elevators to store grain for national emergencies. The government gradually shipped all its grain out of Happy, so the grain elevators had empty concrete barrels and empty large metal flat storage buildings.

The nationwide farming crisis in the late '70s that resulted from low commodity prices affected Happy but not as drastically as many other farming communities. Nearly all the remaining farmers in the region scaled back their operations and expenses several years earlier because of returning to dry-land farming. Many farmers in the U.S. declared bankruptcy, but Happy lost very few of its remaining farmers.

It is sad today as I drive down the main street of Happy and maybe see only one or two cars for several blocks, and these people are either making a quick stop at the post office, the bank, or at the Senior Citizens' Center. Kids growing up in Happy today probably wonder about the "old days" when all the stores bustled with business and the streets filled with vehicles and people. Unfortunately, the "good old days" of the '50s and '60s have disappeared probably forever.

It was the best of times; it was the happiest of times. Baby boomers, born in the latter part of the 1940s and into the 1950s, enjoyed an improved lifestyle after their parents survived the Great Depression and World War II. Parents could provide better lives for their children, especially for those who grew up in small communities like Happy, Texas, a small farming town in the Texas Panhandle thirty-five miles south of Amarillo and eighty-five miles north of Lubbock. The town’s moniker, “The Town Without a Frown,” really applied to these young people.

In Happy Days in Happy, Texas, author Dr. Rickey L. Harman recounts his personal experiences to describe the great life these boomers enjoyed. Because of their parents’ improving financial conditions, kids in town and in the country experienced new modern conveniences such as telephones, indoor plumbing, central heat and refrigerated air, television, automobiles, and maybe their own bedroom.

Harman examines the founding of this small community, describes what it was like growing up in Happy in the 1950s and 1960s, and discusses its gradual decline in the latter twentieth century.

Dr. Rickey L. Harman was born and raised in Happy, Texas, and graduated from Happy High School in 1964. He earned his bachelor’s and master’s degrees from West Texas State University and his doctor of education from Texas Tech University. Harman spent forty-four years in education as a teacher, school administrator, and college professor. He and his wife, Judy, have been married fifty-two years and have a daughter and a grandson.