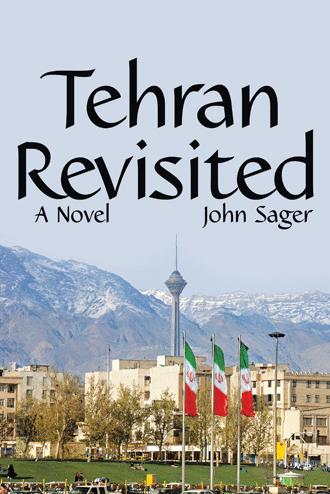 Twenty-four hours later, Abdullah sat on the edge of his bed and reviewed his day. He had used his Olympus digital voice recorder--purchased for twenty-one million rials at a black market counter in Tehran's Grand Bazaar--to record their conversations, make notes, and prepare questions for tomorrow. He was most interested in what his grandmother had told him about her new life in Jesus Christ, as she had put it.

"What do you mean, Grammy?"

"Sweetheart, within two months of my arrival in Paris, I found two other families, expatriates from Tehran, one of whom I had known slightly because we had gone to the same mosque together. Noor Fawazi told me that she and her husband were going to a Catholic church, they had learned the mass rituals and had accepted Jesus as their Lord and Savior. It was a dangerous decision, as you know, because according to Iran's sharia law, a conversion to another faith is punishable by death. So they don't talk about it because they don't want anyone back home to learn about it."

"Why would they do such a thing, knowing what might happen if they're found out?"

"I'll tell you why. We've talked about this at great length, and that's why I, too, have become a Catholic. I go to mass with Noor and her husband every Sunday morning, and every Wednesday evening our church has a Bible study program. For about six weeks now, we've been learning about the differences between Christianity and Islam, and this is something I want you to understand too. It will change your life, sweetheart, trust me."

"Good. The first thing I should say is that Christianity had been accepted throughout Europe for some 600 years before Muhammad appeared in Mecca. Muhammad claimed that Allah had spoken to him in visions and instructed him to write down his revelations in a book. But Muhammad was illiterate, so he told his friends about these revelations, and it was his friends who actually put the Qur'an to paper.

"You need to understand, sweetheart, that my Christian faith and the faith of every other Christian--and there are more than two billion of us--absolutely depends on these truths: One, that Jesus Christ was God's Son; two, that He was crucified by the Romans; and three, that He rose from the dead and ascended into heaven.

"And Muslims are expected to believe that everything they read in the Qur'an is absolute truth, spoken by Allah himself.

"Well, let's see about that. We're both wise enough to want to know what's true and what isn't. One thing the Qur'an claims is that it would be impossible for Allah to have a son. Muhammad's writings would have us believe that Allah was too majestic to have had a son; that he would have needed a wife, a wife whom he'd have to impregnate--but all of this is beneath Allah's character because, according to Muhammad, when Allah wants something, all he has to do is say, 'Be!' and it is. In other words, it is impossible to think of Jesus as God's son."

"Hmm, I've never thought of it that way, Grammy, but it's beginning to make sense."

"Good, you're a smart guy, and I can see that you're beginning to see the light. There's more, much more"

"I should think so. Go ahead."

"As I just said, my Christian faith depends on another truth: That Jesus was crucified. But the Qur'an specifically denies that He was crucified. The text claims that those of us who believe this are pursuing a conjecture, that there's nothing to it.

"And there's more, sweetheart. You've probably never heard of it but we Christians believe in something we call the Trinity. That means that God is mysteriously three persons: God, Jesus, and The Holy Spirit. There's plenty of evidence for this idea in the New Testament. But again, the Qur'an denies this and insists that this is impossible, that there is only one Allah. More than one, no."

"Granny, what about Muhammad as a person? I've studied the Qur'an and memorized most of it, but I see him as a powerful warrior and not much more than that."

"It's important that you know more than that, sweetheart. Muhammad began his ministry in Mecca when he was forty years old. He had a lot of trouble persuading the locals that what he was preaching was true because most of them were pagans, people who worshipped idols. However, his wife was an influential person, and that meant he was free to preach pretty much as he wished. However, after she died, he ran into fierce opposition, so much so that he decided to move north to the city of Medina.

"Scholars have been able to determine what parts of the Qur'an were written while Muhammad was in Mecca and those written after he moved to Medina. And we now understand that after he moved to Medina he became a different person. You said you remember him as a warrior, and that's what he became in Medina. He provoked a number of battles, he ordered the decapitation of his prisoners, and he broke his promises and decided he could have as many wives as he wanted."

"Not a very nice person, right?"

Tehran Revisited is the fictional memoir of author John Sager, who served as part of the CIA's Tehran station in the 1950s. He sometimes dreams of returning for a brief visit, knowing it's unrealistic. Instead, this is his story.

The tale is contemporary, as the American president--frustrated by his unavailing tweets--has directed the Central Intelligence Agency to bring about regime change in Iran. The critical caveat is to have no American fingerprints.

Using a most unlikely array of agents and helpers, the agency succeeds in its mission, but not without the help of Roya, a beautiful young woman who has the last word.

John Sager is a retired United States intelligence officer whose services for the CIA, in various capacities, spanned more than half a century. A widower, he makes his home in the Covenant Shores retirement community on Mercer Island, Washington.