The Day I Met a Little No-Fin 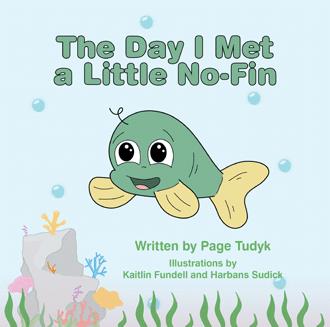 Until suddenly, Philip sees the light from the sun above him and a great big “thingamabob” scooping him up! He is plopped into a box- shaped water holder that looks like it goes on forever and ever but there is something invisible in the way? On the other side of the invisible walls are about a hundred “No- Fin’s”! Philip has never seen a “No-Fin” up close before but he’s heard many stories from his schoolmates. Philip tries to yell “help!” but no one seems to hear him. All of a sudden one of the “No- Fin’s” pops up right in front of Philips face and looks him directly in the eye.

Every day, Philip the fish waves goodbye to his mom and dad and goes to hang out with his schoolmates. They drink kelp smoothies and swim through beautiful, colored coral. Today is different because Philip forgot his wallet and has to turn back home.

On his way home, though, Philip is scooped up by a mysterious “thingamabob” and brought above water! Philip can’t breathe up there, but he’s soon thrown into a water-filled bucket with a bunch of fish he doesn’t know before moving to another big container where he sees … them.

There are dreaded no-fins everywhere! No-fins are scary, harmful creatures—or at least that’s what Philip has heard. He soon sees a tiny no-fin, smaller than the rest. Philip comes to realize that no-fins aren’t so bad as this little no-fin helps him get home. Through Philip’s story, author Page Tudyk hopes that everyone in the world would see life through the eyes of an animal, beginning with our little ones, whose compassion can speak for those with no voice.

Page Tudyk is an Actress, Administrative Coordinator, Swimmer, Daughter, lover of all animals and now first time published Children’s book Author. On any given Saturday she can be found sipping java from one of her 7 favorite coffee mugs, outside somewhere, whether it be a rooftop, balcony or the middle of a crowded street fair. She lives with her exceptionally amusing fiancé and rambunctious pup, Perkins, in sunny California. Her hope for the world is that everyone in it would try and see life through the eyes of an animal, beginning with our little ones whose compassion can speak for those with no voice.