Older than My Boss 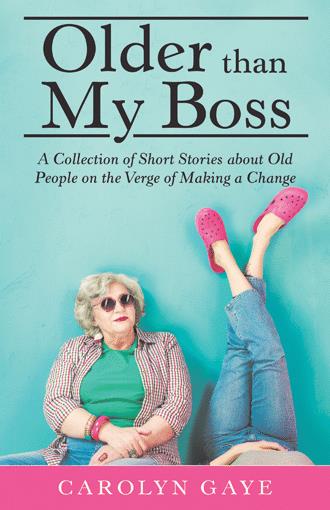 Robert Caruso was not feeling well,, he could barely lift his fork, much less eat the truffled angel hair pasta that dangled off it. In fact, nothing appealed to him these days, not even the finest Grand Marnier souffle or his once favorite dish on Aldo’s menu, salmon en croute with tarragon sauce. Even the idea of popping a tidbit like Aldo’s light and fluffy Petit Four in his mouth was too much work.

These are stories about people standing at these crossroads as they reach a venerable enough age to elicit a far-away look in a young person’s eye as he or she tries to picture which black and white historical era you represent. The Critic

The Doodler finds two ladies sitting on a lakeside bench. They are neighbors from Buffalo on a summer Idyll after experiencing the longest, snowiest winter on record and their faces follow the arc of the sun as they talk.

People 55 and over puzzle out their future in Carolyn Gaye's entertaining yet evocative tales. Mature men and women (and a robot) are poised at the brink of life's changes, and readers have a chance to wonder which way they will turn. The characters have found themselves in unfamiliar terrain and the choices are not always clear. There are a wide variety of personalities and situations they have gotten into, but they all find a way forward. A comedian wants to be taken seriously in his old age, a 60-year- old robot has high aspirations when he is rebooted, the proprietress of a Dodge City saloon tries to write a memoir and a food critic learns to enjoy food again. These stories and more explore different ways that the changes of mid-life and beyond can be navigated.

Carolyn Gaye knows what it's like to be getting along in years. She is so old she literally belongs in a museum-- she has a master's degree in museum studies and also in developmental psychology from San Francisco State University. She attended UC Berkeley before getting married and raising two daughters. She is a grandmother of 5 and currently lives in Walnut Creek, California.