Truman, Eisenhower, Fulbright, and US Foreign Policy in the Middle East, 1945-1958 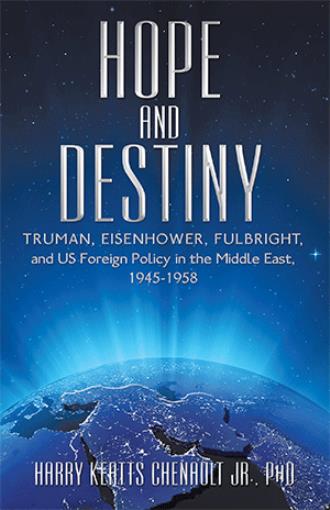 By 1947 President Truman knew the only way to deal with the Russians was through strength. Between 1945-1947 Truman went through a mental process from wanting to trust the Russians as a World War II ally to the realization that Stalin was no one to trust and he could no longer take an easy path with him. For example, the Truman Administration negotiated with the Russians on keeping their word to remove troops in Azerbaijan by March 1, 1946 and then reneging on their pledge. When Truman set up the Truman Doctrine, he knew he was coming from a position of strength.
In 1948 the British government decided to resolve nearly all of its foreign relations problems in the Arab world, with the exception of Palestine. Egyptian manpower was a concern for them. They studied the USSR model, that viewed all nationalities within the Soviet Union as one, and by doing so all people within it were one work force. The British Foreign Secretary thought the British should do the same not only in Egypt, but in all the Arab nations with the idea that the British would have one major army in the region. The strategy was considered important due to the fact that the British could no longer look to the Indian Army for assistance. The British were looking for a major line of defense against the Russians in the Middle East. If they could build such an alliance with the Arab world, then they could view the loss of Palestine as minor.
On January 7, 1948 President Truman delivered his State of the Union Address before Congress. He said the following about his aid to Greece and Turkey:
We have been giving substantial aid to Greece and Turkey to assist those nations in preserving their integrity against foreign pressures. Had it not been for our aid, their situation today might well be radically different. The continued integrity of those countries will have a powerful effect upon other nations in the Middle East and in Europe struggling to maintain their independence while they repair the damages of war.

The Egyptian newspaper al-Ahraam wrote about Truman’s delivery, stating he was defending his policy by attacking criticisms about the Marshall Plan and he was demanding that Congress approve it. The paper reported that Truman also made a passing remark toward the USSR. He said it was unfortunate that “all the governments” meaning Moscow, did not share the economic restoration that the US was undertaking.
By February 1948 the US State Department made an assessment of the US position in Palestine including the possible use of military force. The National Security Council concluded that the Eastern Mediterranean and the Middle East were “vital to the security of the United States.” By recommending partition of Palestine to the UN General Assembly, the State Department said the US “assumed a moral obligation, along with the other members of the UN.” This meant the US “cannot without cause fail to fulfill this moral obligation.” The State Department believed if the US did not take a resolute stand on the Palestine problem, it would demonstrate an “incompatibility” for the security of the US itself.
In the report the State Department looked at various courses of action on Palestine, including sending armed forces under the United Nations. To protect the Jewish state from the onslaught by Arabs in Palestine, the surrounding Arab states, and the greater Muslim world, the US would supply arms, ammunitions, and other types of equipment for war. The UN Security Council stated that the US would be acting in accordance with Article 39 of the UN Charter. That would protect the UN Resolution for partition. Next the US would join an international force with either members of the “US armed forces or volunteers.” The concern the US had was that the only other country at the time that could provide such support was the USSR. The US believed it needed to match any such force the Russians might use. The State Department highlighted the advantages and disadvantages of any US proposal using armed force.

In Hope and Destiny, author Dr. Harry Keatts Chenault Jr. takes an in-depth look at the Middle East foreign policies of President Truman and President Eisenhower, along with the significant impact Senator J. William Fulbright had during the Eisenhower years. It provides an historical account of how these three men dealt with serious challenges in the Middle East.

The beginning of the Cold War and the genesis of the nuclear age forced Truman and Eisenhower to make tough, savvy decisions that would influence US foreign policy for decades. Fulbright is noted as a key player for his substantial impact on foreign policy decision-making, famous for his stance against Vietnam, but less known for the position he took on the Middle East in the 1950s and how his opinions prevailed.

With exhaustive sources and thoughtfully assembled observations, Hope and Destiny offers a valuable tool to help understand how events today resonate so soundly from the nation’s past. The legacies that Truman, Eisenhower, and Fulbright left on US foreign policy, and especially in the Middle East, leaves a future roadmap for all US political and military leaders.