by Ed Morrison & With Mindy Morrison 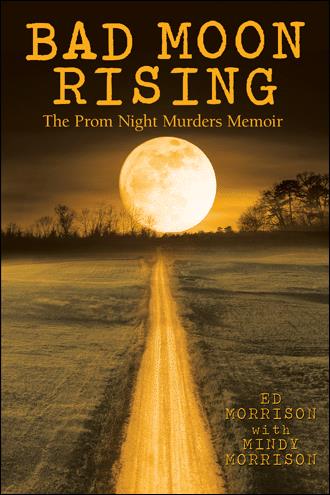 Retired trooper Dave Jung recalled, “Not to sound cold-hearted, but I was relieved they found them, for your family’s sake, because the search was over. But when we saw the bodies, relief turned into anger. Only an animal would do this!” When I arrived at the scene, I pulled behind Sgt. Means. He got out of his car where we were barricaded from advancing further to the scene 50 yards away. I counted 22 police vehicles on both sides of the road along with two St. Louis TV crews in vans. I still didn’t know what was going on. Finding their dead bodies never crossed my mind. I wasn’t ready for that. As I stepped out of my car, a police officer stopped me. “Who are you?” he asked. “Eddie Morrison,” I said. “Did you find something?” I caught him off guard as he instructed me to get back in the car and go home. Debbie’s dad stood in front of his car speaking with a police officer while Ernie, who accompanied him, listened close by. Lin Allen got out of my car to see what was going on. Ernie slid in the passenger side next to me and said, “They found them. They found their bodies.” “What do you mean they found them? Are they alive?” I shouted. “They’re dead,” Ernie could barely speak. “You’re a liar! You’re a liar!” I screamed and pounded him with my fists. “You’re a liar!” I continued, refusing to believe it. Trying to maintain composure, Sgt. Means approached my car with a calm controlled voice. “Follow me to your house, and I will tell them.” Ernie and Lin climbed in my car, and I turned around and drove back to Mascoutah following Sgt. Means. I remember nothing about this drive back home. It’s a blur. I don’t believe any of us spoke. I pulled next to my house on the side street, and Debbie’s dad stopped in front. Mom and Mrs. Means met Bob at the top of our porch. He was the messenger of news no one wanted to hear. “They found their bodies, and they’re dead,” Debbie’s dad muttered. The house crumbled in anguish. The howling and crying were unbearable. Mary’s screams could be heard for blocks and still resonates in my gut. I noticed my little brother, only 6-years-old, looking confused, kicking the iron bars on the porch railing. Mom scooped Joey up in her arms. He will never forget what she told him, “God doesn’t want just old people in heaven. God wants young people too.” I don’t know how she had the mental strength. I still don’t. I couldn’t go in the house and walked to the back porch where Lin and Ernie sat in shock. Bovinette stopped by and brought Russ. Through the decades, the moment plays over and over in my head, when Bob Means revealed the finding of the bodies to the mothers waiting on the front porch of our home. Our hopeful future collided with incomprehensible despair. The sudden impact of evil destroyed any trace of innocence we had. “I want proof! I want proof!” I demanded, at the apex of denial. Ernie and I jumped back in the car and beelined it to Scott Air Force Base, not knowing where they took the bodies, unaware they were still at the crime scene. We made our way to the morgue in the basement of the base hospital. We ran down the stairs and tried the door but it was locked. Ernie went berserk, throwing himself against the walls and flailing on the tile floor. “Stop, Ernie! Stop!” I pleaded as I braced myself against the wall. Authorities assumed Ernie was the brother of the deceased and security didn’t know how to handle our demands to see the bodies. Urging us to go to the police station, we eventually complied. We drove them crazy also. Still out of control and demanding proof, the Police Chief called my mom for help. “Eddie, you have got to come home. I need you,” she pleaded. “Okay, Mom,” I relented as the calmness of her voice convinced me. In later years, I asked Mom about that call. “They didn’t know what to do with you, Eddie. Your dad wasn’t home yet, and I had to be strong for the family,” she stated. My mother would be the kind of person I would forever strive to be.

Ed Morrison's brother, Michael, and his spunky girlfriend, Debra Means, never made it home from the Mascoutah Community High School prom held on May 3, 1969. Two days later, their bodies were discovered near an abandoned strip mine on the outskirts of town. After taking his victims at gunpoint, Marshall Wayne Stauffer raped and strangled fifteen-year-old Debbie and dispatched eighteen-year-old Mike with three shots to the back of his head.

In this true crime memoir, Ed Morrison chronicles his journey nearly fifty years after that fateful night to learn the truth of what happened, illuminate the evil within a murderer, and find resolution. Gathering insight from interviews with former police investigators, attorneys, judges, a survivor of a similar attack, and prison personnel, Morrison exposes the raw emotions that accompanied the senseless killings. He traces the murderer throughout his life, uncovering facts and unknown stories about his cross-country crime spree, imprisonment, and eventual death.

Bad Moon Rising is the gripping true story of one man's quest to uncover the truth fifty years after his brother and his brother’s girlfriend were murdered on prom night.

Ed Morrison was born in Newfoundland and proudly calls himself an Air Force brat. He and his wife, Mindy, and their sons, Nate and Drew, moved from Illinois to live for seven years in Germany, where they traveled Europe and hammered on the Berlin Wall. Ed and Mindy have safaried in Kenya, kayaked in New Zealand, and chilled in Iceland. Now retired, they make their home in Virginia's Shenandoah Valley.