A Tale of Eternal True Love, of War, and Deadly Conflict against an Unholy Terror! Book I 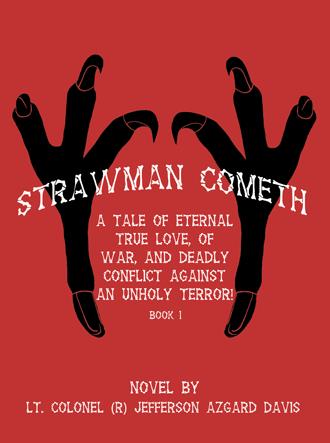 … the door was blown from its hinges by some powerful force and in the doorway stood Strawman. The zombies that remained stood silently behind him. Then he saw Annabel from across the foyer as she had just descended the spiral staircase.

She was radiantly beautiful in her long white dress and looked scared. Ayiti spoke in the low metallic monotone of Strawman. “I have come for you Annabel, for you to be my bride forever!” As he began to walk Annabel shuddered and ran to the basement stairs. She looked back as the wide fanged grimace from Ayiti with flashing red eyes touched her. She screamed and ran down the basement stairs as Ayiti followed. As Strawman came to the bottom of the stairs his wounds from the crystal and lust for Annabel completely obscured his usual sharp senses. He walked towards her as she had moved back into the storage area. She cried.

“I do not want you Ayiti, for I love Horace! Please leave my life and me in peace! Haven’t you done enough damage?” The Strawman cackled a loud leering laugh. “I do not care about your life, your husband, or anything except that you are mine now and will come with me…and if not my queen, then my slut slave forever!” Annabel wailed in grief as the monster Loa god moved up behind her and grabbed her breasts from behind. His lust was now epic, much greater than his favorite French lady of old! Strawman would, in the midst of the battle upstairs have a bout of sex with her here and now! He had never felt so moved by a mortal woman. She would be his queen! Then beautiful Annabel turned and faced him. The dozen red flashing eyes of Strawman then beheld not Annabel but the most terrible witch demon face he could remember. Unused to being terrorized, he shuddered impulsively as it spoke.

The claws of this shape-changed Annabel banshee dug deep into Strawman’s thick hided chest. Black blood from the deep claw wounds now gushed down its front. “Do you really love me Demon! I give you the love back you gave me!” All of a sudden, this horrible apparition that used to be Annabel bit deeply into the strange nose of the Strawman sending shockwaves of pain into it. Then the image of Annabel exploded in an array of blinding white light, followed huge slashing talons and gnashing fangs. Strawman shrieked loudly in fear and pain under this sudden attack as his face was being torn open. Colonel Nephew wheeled around from a wall divider at the bottom of the stairs …

then looked up the stairs to see another zombie, a large one with a silver skull mask reflecting from the electrical light. All hell was breaking loose in the struggle with Strawman now. Ravi had launched a powerful disabling attack on the monster which was still floundering from his powerful blows and delivering dangerous counter blows in the scuffle. Takoo had grabbed him around the body holding his arms down as Marley hooked his left arm around the neck of the hideous beast and plunged a large needle of a syringe into his neck forcing the strong voodoo cocktail into him.

The effects of the cocktail were immediate as this huge powerful devil doll wailed in fear, pain, and hate. It knew what had been injected into it! Strawman broke loose from Takoo’s powerful grip throwing both he and Joshua to the ground. Cavendish then hit Strawman with a huge club breaking it. Strawman knocked him to the ground. Ravi was again attacking the Strawman with the image of Annabel’s face as his powerful claws ripped huge gouges in its body which oozed dark blood on it, and on the floor. Blood as black as its soul. Ravi could feel his weakness grow as he struggled with this strange demon. This monster was not dying, just weakening. He thought that this hideous thing needed to be put in the lead box before it killed them all!

Meanwhile, Nephew emptied all five rounds of .00 Buck into this new skull faced zombie as it walked down the stairs, jerking from the rounds blowing holes in its large torso and only denting the silver mask it wore. Each shot knocked it back, but to little avail. Zombi then backhanded Nephew just after the colonel had struck him across his head with the butt of the shotgun. The colonel disappeared through a collapsing wall divider into a side room at the bottom of the stairs from the blow. Zombi then began walking and echoing a high-pitched wail as he approached his master who was in mortal conflict with a strange assailant. Just as Zombi was within a dozen feet, Cavendish jumped up and aimed his Luger pistol right at his chest. “Farewell you bastard!” he yelled as he fired a Krupp special grenade round at Zombi’s chest.

The blast disintegrated the monster Zombi into pieces as the concussion from the blast blew out the lights and knocked everyone to the ground. The basement was a smashed wreck from the blast as water from broken pipes began to fill the basement floor. Shrapnel from the grenade round had hit everybody as they all bled from wounds. Then the Strawman stood up laughing as he now faced the form of a huge bloodied cat. He was now beginning to feel the extreme effects of the cocktail Marley had injected into him and was becoming dizzy and very disorientated. He yelled in his low-pitched wail. “You are all to be my special zombies now!” Cavendish witnessed this monster in full view in the basement shadows; with its straw looking body, twelve eyes, horrible fanged and twisted mouth covered in his Stygian colored blood; with a crooked set of horns on its oblong head. But as the others stirred Cavendish had been thinking. He used his knife to cut the end of a power cord plugged into the wall and yelled.

“Out of the water now everybody! Hurry!” He looked square at Strawman and their eyes locked in a hard stare. Ambrose then jumped on a chair, hung on to a wooden floor beam and plunged the open end of the power cord into the rising water. The electric current flashed through the water and soon all witnessed Strawman filled with the pulses of thousands of watts of electricity. It screamed in mortal pain as it stared at Cavendish and his wire in the water. The Strawman’s body was turned into a giant light bulb emanating a huge ball of flashing electric light. Watching Strawman turn into painful toast almost amused Ambrose as he gave a leering smile at this monster.

It is 1897 in northern India. On the eve of an epic battle between the British Army and Indian tribesmen, Lieutenant James Cavendish leads his scouts outside the outpost while wondering if he will see the dawn. Thankfully as the British win the day, fate dictates his survival. During this conflict at the outpost, Cavendish meets Jenny Farnsworth, his future wife. But before their union can come to fruition, the aftermath of the battle signals the beginning of a mysterious adventure in terror and chaos for Cavendish and his men that sets in an uncharted jungle valley in the Himalayan mountains to battle against an ancient evil enemy and his legions of walking dead. Cavendish befriends an ancient benevolent race and falls in love with a beautiful shape-changer. He returns home; eventually injured and is forced to retire. He and his wife Jenny move to Jamaica to help run the family rum business. But it is not long before paradise is destroyed by the advent of a powerful voodoo king from Haiti with strange origins, known as Strawman. As it comes face-to-face with Cavendish, only time will tell if he and his allies will eliminate or only contain this vile nemesis?

Strawman Cometh is an epic tale of life, love, and war as a young British lieutenant and his family become trapped in the landscape of an unholy ancient terror. In 1975, James Ambrose Sullivan, the great grandson of James Cavendish will become family custodian of the dangerous legacy of Strawman. Will “Strawman Cometh” to St. Louis Missouri to destroy the seed of Cavendish and fulfill its vile revenge?

LT. Colonel (R) Jefferson “AZGARD” Davis is a native St. Lousian who holds BA and MA degrees in history from Missouri State University; commissioned an officer in ROTC and served in US Army intelligence until his retirement in 2008. He is a Grand Master of Kenpo Karate and has taught the art for 45 years. He also taught high school social studies. Strawman Cometh is his first novel.