Stories and Life Lessons from an American Dream Come True 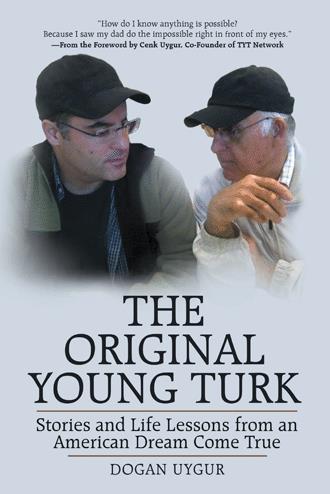 The war was on, but it was a world away. Turkey hadn’t yet entered the fray, staying neutral between the Axis and the Allies until February of 1945, when the country could no longer keep its distance. The men of Kilis, a large, provincial agricultural town in the Gaziantep province of Turkey, spoke of the war often, how the Germans fought bravely but both sides were valiant in their efforts.

I’d listen to their stories out in front of my mother’s house, wrapped up in tales of fierce battles and hand-to-hand combat. Most of them scared me—the sheer number of people who had died in the war up until that point was unimaginable to a boy my age—but I liked to dream of the far off places they spoke of, Germany and France, Russia and Japan, and, one of my favorites, America. As I grew up, my interest in America never waned. It grew as I grew, and I knew one day I’d find myself there, or so I hoped.

Many early mornings, right after the sun had come up and dawn had given way to day, I would lie in a wheat field waiting for a shahraci, a type of farmer who transported crops by donkey to a harvest area outside the center of town. Staring up at the sky, I thought about what was happening beyond the farmlands of Kilis, outside of the country, far away. I watched the clouds roll by in wonder and imagined planes above, the same flown by the Americans, the Germans, the Japanese.

My other favorite daydream was about getting out of work.

Even then, I was devising a plan, a great plan, to get an education, leave farm life behind, and meet and marry a beautiful girl—for an eight-year-old boy, it was quite ambitious and detailed.

My father had died when I was just eight months old, so though I’d love to say I knew him, that would be a lie. He was young, only thirty-seven, when he succumbed to cancer, leaving my mother, Nuriye, my six-year-old brother, Ihsan, and me to fend for ourselves. Ihsan had been old enough to remember him, but only vaguely.

With my father gone, the rest of us had to work ever harder, my mother taking on the lion’s share, though both Ihsan and I pulled our weight. On account of his illness, when my dad passed away there was a sizable number of medical bills left for us to handle, adding up to tens of thousands in today’s US dollars—tens of thousands we certainly didn’t have. My mom borrowed some money from our uncles and other relatives, then took out a loan to start paying down the rest of this huge debt.

Like many other families in Kilis, we lived simply, making money from the plots of land we cultivated and the crops we harvested. Kilis is located two miles north of the Syrian border on a long, even stretch of land. Mountains loom above to the north, but looking off to the east, west, and south, it’s flat as far as the eye can see. The town had become an agricultural center on account of this terrain and its good soil. Kilis is located close to the Fertile Crescent, which stretches like a half-moon from the Persian Gulf to the Mediterranean Sea, extending from Iraq to Egypt, and covering the southland mass of Turkey. As far back as 5000–4000 BC, human societies started to settle throughout this area and develop agriculture and farming methods.

My mother owned six small plots, most of which were entirely inconveniently located to one another. The only pieces of land that were next to each other were two tiny agricultural lots about a mile or so from our house. There we would grow and cultivate small amounts of cotton or wheat, as much as the minuscule space could bear. Another piece of land we owned was a vineyard with about 350 grape vines three miles from our home. The three other plots consisted of olive trees—one with fifteen trees, one with twelve, and one right over the border in Syria that held twenty. None of the olive groves were close to our home, near the center of Kilis, nor were they near the grape vines, nor were they near each other. This meant we had to travel miles in all sorts of different directions to check in on the crops. Though I find it funny now, it was no laughing matter for us then.

Unlike many of the other farmers, we didn’t have any transportation—no donkeys, no horses, and, of course, no tractors. Though we would have been considered a middle-class family, we were low on the middle-class ladder, near the bottom rungs. Members of the “lower classes” worked in the fields as well, but they also built houses, held construction jobs, and cleaned the streets, while some were merchants who owned small grocery stores or butcher shops. None of them owned their own land. Just as today, land ownership was important, and the wealthiest families had the most land—the biggest commodity in any agricultural area. Therefore, we were fortunate to have our own pieces of land, but that didn’t change the fact that they were difficult to get to.

I started to work in the fields when I was seven or eight years old. When I was in grammar school, I would help my mom out before and after class and then throughout the entire summer. Though I began contributing to the family by performing small chores around the house, in no time I was pulling and cutting weeds, checking fruit, and tending to the crops. When we were lucky, my uncle let us use his horses and donkeys. On such occasions, I would stay overnight at his house and then get up at 3:00 a.m. The town slept as I rode down the streets through the eerie calm of those quiet, dark mornings.

Born in 1937 in the wake of the Turkish War of Independence, Dogan Uygur grew up in a virtually unknown agricultural town in southern Turkey. Although he was loved and supported by his community and family, Uygur yearned for more than the fields of Kilis and the backbreaking work of a poor subsistence farmer. He dreamed of escaping the dreary routines, lack of social mobility, and violent run-ins with Syrian soldiers to live a life of his choosing.

While recounting his experiences of how his dream came true through perseverance, education, and an unbending work ethic, Uygur also shares advice that guides others to attain their own versions of success by pursuing education, taking risks and seizing opportunities, overcoming failure, questioning deep-held assumptions, and maintaining a progressive, positive attitude. Throughout his memoir, Uygur provides inspiration through his personal stories of triumph, academic achievements in two countries, and determination to return to his homeland to help bolster its burgeoning manufacturing industry, only to be forced out amid political strife and social upheaval.

The Original Young Turk shares a true immigrant story that proves, no matter what our obstacles are in life, success is possible through persistence, gumption, and help from others.

Dogan Uygur is an engineer, entrepreneur, and writer. Born and raised in southern Turkey, he attended college in Istanbul before moving to the US for graduate school in 1961. He has started and run businesses both in Turkey and America, including Enternasyonal Makina Sanayi, a company that was at the forefront of Turkish machine manufacturing during the 1970s. After escaping political upheaval in Turkey in 1978, he returned to the US, where he worked in commercial real estate for nearly thirty years. Today, he lives in Freehold, New Jersey, with his wife, Nukhet.