A House in the Land of Shinar 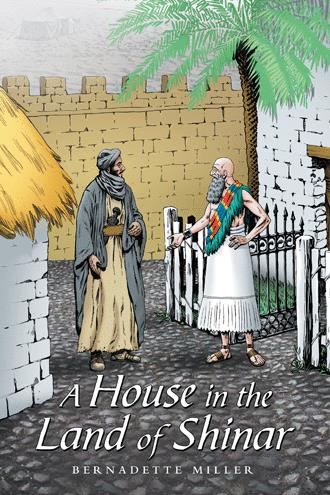 At dusk, dreading the weekly worship, Tiras said goodbye to Milcah, one of his three wives, and kissed her cheek. Then, turning in her black tent warmed by a glowing copper lantern, he smiled at his adorable, five-year-old daughter, Shallah, who tugged at his robes beneath his sheepskin cloak. "Baba, baba, baba," she murmured, using the affectionate term for father, her cheeks dimpling. He scooped her up in her robe, and felt her tiny heart beating against his chest while she kissed his closed eyes. "I must go, my darling Shallah," he finally whispered, and set her on the carpet. He continued smiling as she watched him tug on a shawl from a storage sack hanging against the tent wall, wind the shawl into a turban as protection against the nocturnal cold, and then fasten his cloak's toggles. Milcah handed him the prayer rug. He tucked it under an arm, his bearded smile changing to a frown. "I'll be back after the ceremony," he muttered grimly to Milcah who nodded in response.

Outside, Tiras rushed to join his father, Mashech, and their bedouin kinsmen who had already passed Milcah's tent, and were headed toward the camp's boundary marked by a row of bushy-headed tamarisk trees. As the robed men trudged past dozing flocks of sheep, goats, and donkeys, their thick woven socks and leather sandals cushioning the hard, pebbly sand, Tiras sought reassurance in the limestone cliffs to his left and the high reddish dunes opposite that enclosed him in a protective corridor. In the distance, the Al-Ubiyah Oasis beckoned with its palm-fringed lake and lush pasture under the graying sky. The peaceful surroundings seemed to say, "Do not worry, Tiras. It's safe here." He knew better.

Like Tiras, his scowling kinsmen clutched a rolled-up prayer rug under their arms. Some also carried a sack of butchered goat meat that stained their cloaks over robes already soiled with food particles and animal saliva. Others held unlit lanterns. As usual, the men complained about the worship ceremony, whispered lest their bull-god, Martu, overheard and punished them; unfortunately, only their priest, Abu-Summu, could interpret their bull-god's commands. The bedouins discussed how just last week, a boy of nine, bound in ropes on the altar, had been beaten until his naked flesh was raked with gaping wounds. Abu-Summu had directed the Council of Elders to carry out the punishment, meant to discipline the boy's father for questioning Martu's motives. The Elders, a group of senior male bedouins elected by the tribe, acted as judge and jury to hear tribal violations, except when the case involved the priest because Abu-Summu could communicate with their bull-god, a higher power.

After the punishment, the weeping father had daubed his son's wounds with a woven cloth soaked in date wine to ward off evil spirits and carried his whimpering child wrapped in a blanket. His kinsmen murmured condolences as they headed beyond the flocks to their black tents peppering the sand. They clutched their hated prayer rugs and swung their copper lanterns lit from the ceremonial bonfire, illuminating a path through the desert darkness.

"How can we prevent Martu from punishing more children in this horrible way?" one finally whispered.

"We must be careful not to offend Abu-Summu," another warned while others wept openly as they recalled the revulsion of past punishments.

"You can't know what it's like until it happens to you," the father of the tortured child added, his beard damp from tears as he stroked his son's arm.

"But if we protest," another said, "we see how Abu-Summu punishes. Do we want to watch more children being beaten?"

"We must find a way to soften our god's demands," Tiras said beside his father Mashech, and added, "I've tried challenging the priest but nothing changed."

"It's too dangerous," Mashech added. Bitten by a jackal during a hunt, he limped with his cane fashioned from a stout tree branch as his free arm clutched his prayer rug. "Before I became the sheikh," he continued, "remember how I complained to Abu-Summu? Then, my dear daughter, Mariah, was beaten and died soon afterward of a sickness. So, all we can do is wait for our priest to grow old and die. Even he can't prevent his own death."

"That must be so," the others responded with dejected nods and dispersed, their lanterns flickering out in the darkness as they vanished inside their tents.

No, that can't be so, Tiras promised himself. As the sheikh's son, he would find a plan to challenge their fierce bull-god.

Now, with increased scowls, the men passed the tamarisk trees and knelt nearby on their prayer rugs. They stared, rigid with expectation, at their priest, Abu-Summu. He'd already piled up stones to form an altar, a cube three feet high, and topped by a wooden ledge that featured the twin, silver horns representing Martu. Beyond the altar, a crackling bonfire, aided by the wind god, Al Qais, showered sparks upward toward the sky's twinkling star goddesses and Martu who dwelt among them.

In ancient Saudi Arabia, the beloved daughter of a Bedouin Arab named Tiras is sacrificed to his tribe’s imaginary bull-god. Devastated, Tiras grows determined to find a kinder god and save his two sons.

Accompanied by his donkey, Tiras sets out for the sophisticated non-Arab land of Sumer, crossing the dangerous Nefud Desert. In Sumer he hopes to discover a faith that will bring happiness and prosperity to himself and his family. After numerous adventures, he returns home with a new religion—the roots of Judaism. But Tiras struggles to persuade his suspicious tribe to accept the new god. What’s more, he must face the consequences of his affair with a Sumerian woman whom he’d abandoned. Only time will tell whether he can help his people find meaning in their lives and establish themselves in their own land.

Set in 3500 BC, this historical novel dramatizes the possible origins of several stories from the Old Testament, based on archaeological evidence mostly unknown to the public.

Bernadette Miller earned her bachelor of arts degree at Maryland University and studied fiction writing at New York University and the New School for Social Research. Her short stories have been published in over forty literary magazines, and she read one of her published stories on the Manhattan Neighborhood Network. She is working on her fifth historical novel, an unusual love story set in Brooklyn, New York, during the Second World War. She currently lives in New York.