The Persevering Penguins and Pals

Propelling One Another to Success 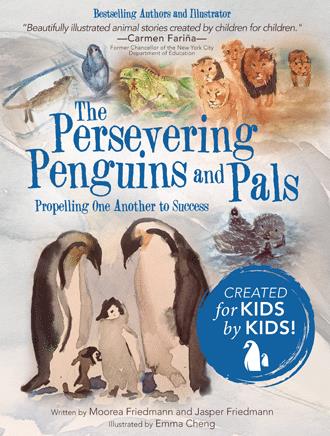 It was another beautiful and quiet day in Patagonia!  A waddle of penguins snuggled happily together, each thinking nothing could be better. The sunlight shimmered on patches of melting snow on the iceberg they called home.

One mother, named Winter, shuddered with excitement. It was almost her turn to have a break and feed herself. Winter looked down at her egg and smiled warmly.

“Soon,” she replied reassuringly. Neither of them realized how wrong she was.

The rest of the penguins had gone out to feed themselves. Among them was Tux, Milo’s father. As Tux waddled back to his family to switch places with Winter, a sudden CRACK! echoed through the cold crisp air. The frightened penguins looked up, shaking with fear.
What could it possibly be?

Another CRACK! was heard and with that, Tux snapped into action and waddled as fast as he could toward his family.  As he approached his family, another massive CRACK! shook the entire iceberg. Tux kept moving as quickly as he could towards Winter, yet it didn’t seem like he wasn’t getting any closer.  The iceberg had snapped in two, leaving the families separated!

Winter and Tux, each on two different sides of the iceberg, did everything they could to bring the iceberg back together. But the rushing current carried them apart.

Meanwhile, Winter paced back and forth thinking she couldn’t do anything, yet wishing she could do so much more. The others on her part of the iceberg just stood there in shock, not believing what had just happened.

Winter realized that she needed to work with the rest of the penguins as a team to bring the families back together. She gathered all the penguins and had a meeting.

“How are we supposed to move such a heavy iceberg?” asked Milo.

“Well our strength altogether could probably move the iceberg…” a penguin announced.

“Hmmmm… Maybe we could push the iceberg with our fins all the way back to the other part of the iceberg to the rest of our family,” said Winter.

“Yeah! Let’s do it!” exclaimed the penguins with sudden enthusiasm.

All the penguins chirped happily to each other, alerting one another of the new plan. They couldn't wait to put their plan into action. They were up for the challenge even though it would take a lot of time, perseverance, and teamwork.

The Persevering Penguins and Pals: Propelling One Another to Success An engaging motivational book by kids for kids to embrace diversity, inclusion, and what it means to be successful global citizens. The authors are three amazing cousins who were between 7 and 11 when they started creating these characters and have gone on to become #1 Amazon Bestselling and award-winning authors and illustrator!

Crafted primarily for upper elementary and middle school students to read, this book is a charming animal story about penguins and other creatures who help children learn that being determined, working with others for a common goal, and embracing differences help us all to succeed.

It is another beautiful day in Patagonia as a colony of penguins snuggles on the iceberg, they call home. When catastrophe strikes for Little Milo and his family, it seems that all hope is lost.

The penguins must band together as a team and wait for the right time to implement their plan. When one plan doesn't work, the penguins brainstorm to create another one. But it turns out they are not the only creatures with big challenges. Through perseverance, helping others, leading, inspiring, networking, and growing, the penguins and their creature friends must somehow find a way to overcome their obstacles, no matter how difficult.

Being a kid today isn't easy! Give your children the tools to overcome life's challenges with a fun and inspiring story for independent readers!

● The chapter book version of bestselling and award winning "Meet the Persevering Penguins and Pals" with the full stories of each of the different animals as well as how they all come together and must help each other to succeed.
● Includes access to discussion guide on what it means to face and overcome challenges to help parents and educators in schools, camps, early childhood centers, and after-school programs talk with children about the topics in the book to help them process and absorb the lessons.
● Includes access to the best-selling and award-winning authors’ and illustrator’s creative process. It’s sure to inspire other young children to follow their dreams!
● Endorsed by Carmen Fariña, former chancellor of the New York City Department of Education as the "Beautifully illustrated animal stories created by children for children."
● The perfect children’s book about diversity for independent readers age 8-11 and reading aloud to ages 4 and up.
● Loved by teachers, parents, grandparents, family members and kids alike!
● Social emotional learning and reading proficiency made fun for your little ones!

Bestselling authors Moorea Friedmann (age eleven) and Jasper Friedmann (age nine) and bestselling illustrator Emma Cheng (age thirteen) are New York City middle and elementary school students who appeal to their young audience with their animal stories and beautiful illustrations. They seek to inspire other children to turn their ideas into reality and embrace the key principles exemplified in this book series to propel themselves and others to success.