War for Your Worldview

What Every American Needs to Know in the Age of Fake News, Social Engineering, and Mind-Controlling Propaganda 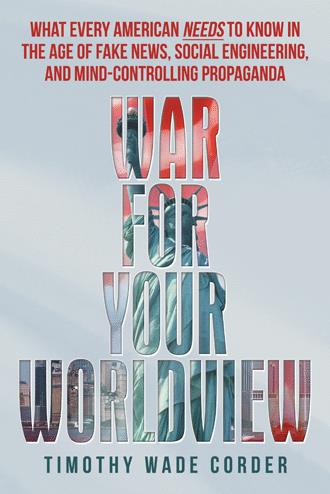 In the interest of maintaining the public’s confidence, news outlets in America have generally followed the tradition of retracting misinformation as soon as possible when they get their facts wrong. Historically, such retractions have typically offered an apology along with the corrected version of what was originally spoken or printed in error. Clearly, the sun has set on those days, and the resulting darkness has become the site of a giant playground for those who seek to deceive, and it is we, the American people, who are paying the price...The news media is, perhaps, the most powerful weapon being deployed in the War for Your World View. The fact that it’s been marginalized to mislead the American public by suppressing the truth, creating false narratives, and inverting reality is truly a strike against all of us, particularly since we rely on our “trusted” news sources to help us make important decisions that directly impact our daily lives and ultimately determine our survival. Our ability to rely on a free press that operates without bias from government or corporate influence is of paramount importance in a free society. We simply must have access to the truth, and demanding it begins with holding violators accountable.

“War for Your Worldview” is based on the insights gained through twenty years of the author’s intense investigative research. Although a great deal has been written in recent years about globalism and the infamous New World Order, much of it provides only scant evidence along with endless conjecture, requiring readers to take giant leaps of faith. This book, however, is different. Corder disregards folklore and presents only the shocking, incontrovertible evidence that proves the existence of the Deep State, showcases the corruption that controls our news and entertainment media, and exposes the elite cabal’s insidious, century-long plot to undermine the founding principles of The United States of America.

Every citizen should be aware of the facts related to how our education system and our media sources have been hijacked to dumb down our population, how the climate change narrative has been forced into our collective consciousness to guilt and shame us into bankruptcy, and how our jobs and industries have been outsourced to destroy our economic well-being. Corder reviews the work of several credentialed “whistle-blowers” who have blown the doors off of the covert operations intended to erode our values and ultimately topple our civilization. He also demonstrates how social engineers have used our most noble qualities against us in their effort to bring about our destruction. The key players are identified by name and concrete examples are provided of their undeniably sinister intentions and egregious acts against our Republic.

Learn how divisive rhetoric and emotionally charged propaganda are presenting direct threats to our civil liberties, and how blatant attacks on patriotism, Christianity, and the US Constitution are erasing our national identity. Discover how deadly drugs, mass immigration, and socialist policies are all being promoted to weaken us as a nation—to destroy our people by bringing chaos and disorder to our lives and our communities. You won’t get these explosive truths from the mainstream media, or anywhere else!

There’s a war being fought for our collective worldview. The weaponry that’s being employed against us is the manipulation of our minds. The stakes are high. The attacks are real. The casualties are real. Know how to fight back—for freedom, for liberty, and for the way of life that we all cherish as Americans.

Timothy Wade Corder is a writer, researcher, and activist, and he is the creator and administrator of the popular Facebook blog A Daily Dose of Conservatism. He is the author of the 2017 book For the Love of Trump: The Historic 2016 Presidential Election from the Perspective of a Social Media Warrior. Although a native of Virginia who was born and raised on the farmland that was once George Washington’s boyhood home, he graduated from San Diego State University in 1998 and has resided in Southern California for most of his adult life.