Bite the Hand That Feeds You 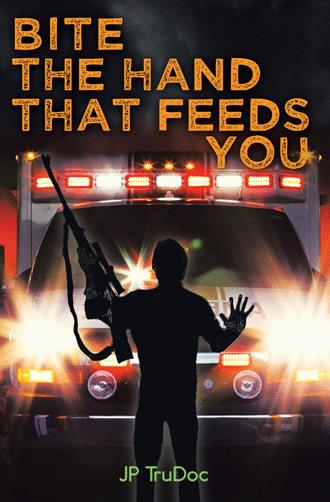 After about an hour of silence, Heather decided to snake her way along the floor toward the nearest wall. She guessed; then decided to move to her right. It took her over seven minutes, quietly. The floor was rough and it took some flesh off her elbows and hands, minor pain compared to the pain in her heart. They had taken her shoes but left her socks. Surprised, she hit a wall, with her head, no less; but fortunately, gently. Startled by the bump, she swallowed a cry, trying to keep quiet. She tapped on the wall with her bound feet, at first very gently, then more firmly. Nothing. She tried again. Nothing. On her third try, she kicked harder, risking detection and just a beating, if she was lucky. Nothing again. She lay there, trying to decide whether to journey to her far left and maybe, find another wall. She felt the tears welling up in her eyes. In the privacy of the moment, she thought she was going to fall to pieces. She lay there with tears dropping from her eyes to the floor, like quiet raindrops. Her nose ran and dripped the three or four inches into the puddle of tears. In a moment of disgust, she sat up, inhaled deeply, wiping her nose on her blouse. Just like a rancher, she mused, breaking the slightest smile at the indignity of her situation.

She dozed and was suddenly awakened by a banging, a loud banging coming through the wall against which she lay. Then a yelling, no doubt about it, “Mom, Mommy, are you there! Are you there?” It was Tess, yelling her head off.

The door in the adjacent room opened and then closed with a slam. She heard screaming, loud screaming and the blunted thud against the wall. It had to be bloody; it was just a matter of physics. Suddenly her door opened, and in a fanatical screech, he let loose. “OK, you two pieces of human shit; I will move the timetable forward. You are lucky, Miss Heather, you and your stinking brat will escape with your lives; but you will leave me with a souvenir of this glorious occasion. Wanna know what?” belched the rat.

In the background, she could hear two others laughing, almost to the point of collapse.

Suddenly, taking some hair with it, he moved her blindfold off one eye. The light blinded her. After a moment, she stared into the face of her abductor, who seemed to care nothing to conceal his features. After all, he did look rat-like; with a sharp, pointed nose and small beady eyes. For all she knew, they could be red – but not so; they were light blue. His hair was sandy blond. He was tall and thin, almost Lincolnesque – maybe he was a Marfan’s case like Honest Abe. He was wearing kakis and a blue sports shirt.

Heather could hear a scuffle, then to her simultaneous relief and terror, two brutes dragged in Tess, kicking and writhing, trying to get free. Impossible. Her hands and feet were bound and she was blindfolded too; but not for long. Gasher leaped at Tess, slapping her hard across the face, causing her upper lip to bleed. With the other hand, he then ripped off her blindfold, scratching her forehead with his nails. Tess saw her mother, with only one eye showing and began to weep uncontrollably. “Shut up, or else!” screamed Gasher.

“Let’s get down to business, ladies,” said the rat, quietly, with a maniacal calmness. “You must and will pay; but only a small fee for the transgressions of your fanatical, crusading husband and father. He bears a cross. He thinks himself a martyr for the poor, underprivileged and injured. Now he will think twice about his involvement in the bloody, unrelenting, litigation that has cost us all far too much.”

The next three minutes were a blur. Mostly, Heather heard shrieks from Tess, screaming at the top of her lungs. But Tess was not the target; just the witness.

Heather’s hands were unbound. She was slammed into a wooden chair with wide arms on each side. Her right arm was duct tapped to the chair in seconds with a rapid round and round motion by one of the rat’s assistants. She could still hear the tape being ripped from the roll with its familiar, shearing vibrato. Next her left arm, same way. But no; this time something was placed under her left hand, maybe a large sock, elevating it above the chair. Why? She quickly found out why. Her palm was taped to the sock and the chair together, leaving her fingers and thumb dangling in midair. Her wedding ring, her treasure, was still on her ring finger.

She heard Gasher lapse into a psychotic rant. “Let the medical record reflect that the patient is in position and that the fourth finger of her left hand, that is, to the layman, her ring finger is hopelessly diseased. There is a foreign body surrounding the proximal phalanx just distal to the MCP joint. Too bad. Let’s put some betadine over the affected area. After all we don’t want any infection, do we? Digital pain block? Nah, forget it. Why this has got to be a memorable experience. Let’s make it quick,” vomited the rat with a smile on his face. “Scalpel, please. No wait. I have a better idea. Go out in my truck and retrieve my favorite tool…..for pruning my roses. It’s right there on the dashboard.”

Within 45 seconds, Gasher was handed a small, rusty pruning shears. The last thing Heather remembered was glimpsing the semi-lunar shape of one of the blades. For good measure, Gasher squeeze tested it several times, next to Heather’s left ear. He knew she could hear the grinding of metal on metal. He was determined to impress his patient with what was coming next. Without repose, Heather suddenly felt the unrelenting pressure of the cold steel on her finger; in her now delirium of terror; she wasn’t sure which. “This asshole is serious,” she thought. “Dear God. Tristan, you bastard, where are you?” she cried, as the room, the rat, and her finger disappeared.

In August 2005, Hurricane Katrina strikes, causing one of the worst natural disasters in American history. Thousands of displaced persons suffer, provided with corpse-pickling, formaldehyde-contaminated housing in the form of recreational trailers, distributed by FEMA and manufactured by unscrupulous government contractors. Formaldehyde takes its toll on lungs, skin, and life itself. After Katrina has blown away their hopes and dreams, the injured seek justice while the system laughs in their faces.

In response, an organization known as the Resistance forms when defendants, sick and tired of spending millions to avoid paying billions, seek a way to settle deadly scores. They begin a methodical elimination of their opponents, first with intimidation, then torture, and finally murder. Dr. Tristan P. Baines, engineer, physician, survivalist, and the expert for the Katrina plaintiffs, suddenly finds himself a casualty of this madness when his family is targeted. Together with his partners, crusty Joseph Trueblood and Laura Swain, a talented lawyer, Baines sets out to confront Gordon Gasher, a.k.a. GAG, a Resistance hack and monster sadist.

This novel, written from a physician’s point of view, explores a dark corner of the American justice system, where toxic tort plaintiffs and defendants collide, battling for billions.

James P. Kornberg, MD, ScD a.k.a. JP TruDoc is a MIT, Harvard, and Dartmouth trained clinical physician-engineer, author, and medical-legal expert who has treated and/or evaluated tens of thousands of persons afflicted with every conceivable type of hazardous substance exposure. He has consulted on over nine hundred important toxic tort litigation cases since 1980. He lives with his wife, Sally, on their remote ranch in the mountains of Southwestern Colorado.