Will That Be Regular or Ethyl? 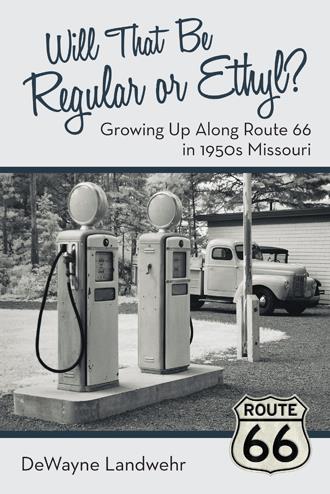 Thunderstorms are common in Missouri, and some of them can be really spectacular. The schoolyard across the street from us was a few feet higher than the ground on our side of the street, and our house seemed to be on about the lowest ground for a couple of blocks in either direction, so all the runoff from the three school building roofs, the playground, and about half a mile of street drained into the culvert that then ran under our driveway toward the back of the property. The culvert ended just beyond the bend in the driveway and an open drainage ditch then carried rainwater to the back of our property next to the railroad tracks.

One storm in particular really stuck in my mind. The water coming off the school grounds and across the street toward us was running so fast and deep that it looked like a waterfall coming down the schoolyard steps. Even though the drain pipe was 12-inches in diameter, it could not take up the rain fast enough, so the water was standing in front of our house more than a foot deep. As the rain subsided, I watched with fascination as the water swirled around the drain and continued to lower. I wanted to go out and play in the whirlpool, but Mom wisely kept me inside until the water was no longer filling the pipe. This was 1950. I was only five years old, and could easily have been sucked into the whirling water, mud and debris that was then rocketing into the culvert.

I had watched the afternoon thunderstorm develop and burst upon us from the window of the living room in front of the house. I really wanted to be outside, feeling the refreshing shower of the downpour as it came down in buckets on the streets and yards. Mother had called me in however, and made it very clear I was not to wander outside the house until the rain, and especially the lightning, had stopped. Now it had, almost, and there was no more holding me back with the appearance of a beautiful, vivid rainbow. The colors were very distinct, and appeared to have been painted across the clearing sky. I exploded from the house, and began running down the sidewalk in the leftover rain from the thunderstorm.

“Where ya headed?” That was Roy, my best friend in the world. He was sitting on his front porch swing, enjoying the cool air following the thunderstorm. “I’m goin’ to see if I can find that pot of gold at the end of the rainbow!” Roy laughed, and said, “Let me know if you find it, and I’ll help you carry it home.” At five years old I had serious doubts about the existence of pots of gold, but with that eternal hope and enthusiasm of young children I had hope that such things could be real.

Roy, approaching 75, was sitting on his front porch swing after the storm, watching the remaining scud drift away, and listening to the thunder continue to move away toward St. Louis. What had been a series of sharp explosions of noise had now faded into an almost continuous low roar as the storm moved off to the east. The air must have cooled off ten degrees already. Gone were the scorching high temperatures of the early afternoon and the choking humidity that kept one’s sweat from evaporating to cool the body. “I feel like I am cookin’ in my own gravy,” he had said earlier, half to himself.

“What? What are you talking about? We’re not having gravy tonight!” Lulu, Roy’s wife of 55 years, was cranky most of the time, and today was no different. When she was crabby like this, her four chins shook and vibrated against her enormous chest as she talked. Weighing in at over 375 pounds, she and her mate made an odd pair. Roy couldn’t hold down 125 pounds soaking wet, with boots on. When I had first heard the poem about Jack Sprat and his wife, Roy and Lulu came to my mind immediately.

“I was talking about the heat today. It sure feels nice now that the rain has moved through, doesn’t it? And the air. It always smells so fresh after a heavy rain; like a brand new day at the first of spring.”

Lulu was not to be denied her bad mood: “This rain will just bring higher humidity tomorrow, and make it unbearable to work in the garden”, she said.

Roy sighed, and decided that perhaps silence would be a better strategy just now. Not that it would be much better later, but now, he just wanted to enjoy the fresh smell and cooler air of the evening. No sense badgering her any more. There was no such thing as winning an argument with her anyway.

As predictable as the sunrise, a voice saturated the neighborhood with fingernails-on-blackboard shrillness. “DeWayne!! Time to come in!” My mom could call hogs in from two counties over, and used her powerful megaphone voice several times a day to keep her brood corralled. During these powerful screams, her voice would cover a couple of octaves, giving them a real ‘sooie’ intonation.

“He just ran down the block a-ways to see if he could find the end of the rainbow”, Roy chuckled. “He’ll be back in a minute or two.”

“I hope so”, Alean said, “it’ll be dark pretty soon and I want him inside.”

“Poor kid”, Roy thought, “she keeps him on a real short leash.”

Five houses. That was as far as I was allowed to go. Mom had made that very clear many times, and I didn’t dare go over the line. I was just turning around when I heard the unmistakable siren call from home. Oh well, I had found out what I thought to be true, so I really didn’t need to go any farther anyway. Pot of gold – what a story. I hadn’t really believed it when I heard it, but I also wanted to know something else. Can you really find the end of a rainbow? Nope. Five houses proved it. As I ran along the sidewalk, the rainbow just moved along with me – I never got any closer. Wonder how that works? Better get home before Mom gets really mad.

“Where’s that pot of gold?”

“Maybe somebody beat you to it”, he said. That Roy sure is fun. Always teasing and laughing with me. I just love that man.

This is the story of the author’s life growing up in a large family in a small Missouri town near Route 66 during the 1950s.

DeWayne Landwehr, like many boys who grew up in small-town America, lived through physical and sexual abuse—but he also enjoyed some great times. His early memories involved raising chickens: There were always eggs to gather. Every day, the family would bring them to the basement to be washed, candled, graded, and sold—or washed, sanitized, and assembled into the trays for the incubator, depending on whether they were to be eaten or hatched into more chickens.

With three older siblings, he could not wait to go to school. Every day, he’d see his siblings go to class—and it seemed so magical. The entire school system was located right across the street in three buildings.

Later, he started working his way to college at a gas station on the famous Route 66, where he encountered people of varying backgrounds. He struggled with the sometimes dishonest practices of his boss, contrasted with the necessity of keeping a job, and met interesting characters along the way.

DeWayne Landwehr grew up in a small town along Route 66 in Missouri during the 1950s. He developed a sense of humor struggling to find his place in a family of six children, raising animals, coping with depression, and dealing with sets of morals different from his own. Landwehr currently lives in Anderson, Indiana.