Fighting Malaria on the River Kwai 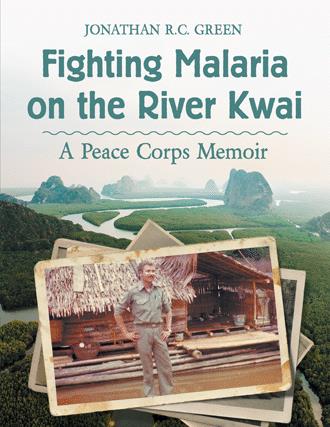 Here I am sitting on a pile of logs by the railway siding, waiting for the train to come take us back to the sector office at Wang Pho at the end of the spray season. There is jungle all around. The sun is somewhat obscured by all the clouds, but it’s still pretty warm. Right near where the train stops is a school, the headman’s house, a library (under construction) and a couple of open air, thatch-roofed, dirt-floored noodle shops. The headman’s house has a TV antenna waving in the breeze with a coconut palm and clumps of bamboo trees close by. I can hear a few birds twittering and the local housewives wrangling about something around their baskets of pumpkins, eggplant and small green berries called makhuea phuang (perhaps a relative of eggplant) that they put in their chicken curry. There is a poster on the wall of the little shelter for a man who is running for kamnan, promising to listen to all complaints and to put the interests of the people ahead of his own.

We ride back to Wang Pho in the afternoon. Since the spray men have a lot of equipment (spray cans, mixing buckets, funnel filters, canvas bags of powdered DDT) we all climb into an empty boxcar for the 7-kilometer trip. The spray men relax on a big pile of rice husks which had been used to insulate a load of ice that was taken up to Nam Tok. In the evening, we all go to a party given by a local family whose son has become a monk. The family is fairly well off, so there is a traditional Thai band (cymbals, marimbas, etc.) and a microphone for a specially hired professional singer who had been brought from Ratchaburi Province (immediately south of Kanchanaburi), who constantly shouted the traditional yells celebrating a monk’s ordination, which sound to me like the yells in an old Tarzan movie. There is lots of delicious food and liquor. As soon as the new monk’s mother found out that a farang [American] has come to the party, she immediately dispatches her younger son to go back to Wang Pho (about 3 kilometers) to buy some Maekhong® whiskey for me, despite my protestations that lao khao, a rural rice liquor which everyone else was drinking, would be just fine with me. Then a drunken policeman sits down at my table and monopolizes the conversation. After exhausting his English vocabulary (3 words), he proceeds to catechize me about how old I am, why aren’t I married yet, etc. It takes him half an hour to understand that I am not a German.

During World War II, 12,000 Allied prisoners of war died while constructing a bridge over the river Kwai in western Thailand, and then a railway through the thick jungles of the Kwai Valley all the way to Burma.

Decades later, during the Vietnam War, Jonathan R.C. Green enlisted as a medic in the U.S. Army, expecting to take care of wounded Americans and Asians, but was kept in a Stateside assignment instead, much to his frustration. So, shortly before his enlistment expired, he applied for the Peace Corps and asked to serve in Southeast Asia.

Six weeks after leaving the Army, he arrived in Thailand as a Peace Corps Volunteer. His job assignment was to fight malaria by controlling the mosquito populations in remote jungle villages in the valley of the infamous River Kwai.

Besides the hazards posed by snakes, scorpions and centipedes in the jungle, he ran the risk of contracting malaria, dengue fever and other mosquito-borne diseases, while suffering severe bouts of dysentery. He often had to live on a monotonous diet of rice, bamboo shoots and hot sauce three times a day, with the only reasonably safe drinking water coming from rain barrels teeming with mosquito larvae.

While becoming accustomed to a rugged lifestyle in the jungle, he had to quickly learn a complex language and exotic culture. An inadvertent misstep in manners could have damaged his credibility, and hence the outcome of his undertaking, as badly as catching the disease he was supposed to be fighting.

Jonathan R.C. Green served two years as a Peace Corps volunteer, working in malaria control, in Thailand from 1973 to 1975. After returning from Thailand, he rejoined the U.S. Army and served five more years as a medic before being accepted to the Army’s Physician Assistant training program. He then worked as a physician assistant for thirty-one more years, during which time he completed a Master of Public Health degree and worked in Travel Medicine. He always had an itch to go back in the Peace Corps, however, so he served again as a Volunteer in South Africa, working in Community HIV Outreach from 2015 to 2017. He then returned to his “first love,” malaria, and became a Peace Corps Response Volunteer, serving as national malaria coordinator in Liberia from 2017 to 2018. He has two grown children and lives in Tacoma, Washington.