The Adventures of Tommy the Texan and Captain Billy

A Return to Blue Skies 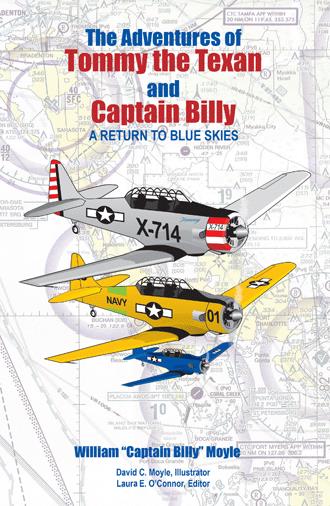 "Finally, Captain Billy said, 'Okay, my friend, I think it’s time to head back.' Tommy was disappointed, but he knew that all had gone well. He knew that Billy and his friends had done a first-class job of rebuilding him and that they would fly again soon. Flying season had just begun, and Tommy had heard talk of a possible trip to Florida to be part of a formation school. He might see some of his old AT-6 friends there. There had been talk of several trips to Cape Cod and Martha’s Vineyard in Massachusetts. He had also heard Billy talk about heading to Midway for the winter, which was Billy’s old home airport and was located near his daughter in Waxahachie, Texas. Tommy was excited about the possibilities of those flights and future adventures.

As Captain Billy completed his turn back to Danbury, the red light on the upper instrument panel came on again, and this time it stayed on! It was the oil-pressure warning light. Immediately, Billy focused on the oil pressure gauge, which was just above his right leg. The needle was steady. It was pointing between seventy-five and eighty psi (pounds per square inch), which was normal in the cruise-power settings.

Tommy was brought back to the present by Billy’s voice. 'Tommy, we may have a problem here. The oil low pressure light came on, but the gauge reads normal. So, my friend, which one is right? We better not take any chances. I am going to reduce the power just in case. How are you feeling, my friend?'"

The Adventures of Tommy the Texan aims to be a fun, yet educational series that engages the reader. In the back of the book are technical areas of the North American T-6 Texan pertaining to the book with maps, charts and diagrams. The book is meant to stimulate the mind and imagination while taking them on a journey, learning about geography, flying and life.

During their time together, there builds a special connection between a man and a machine. Tommy will make sure that nothing happens to Billy and Billy will take good care of Tommy. Billy will converse with Tommy during their flights together and Tommy will connect with Billy. The spirit of Tommy, if you will, is the connection that develops between the two. The conversation only happens when the two are together, and sometimes without a word. 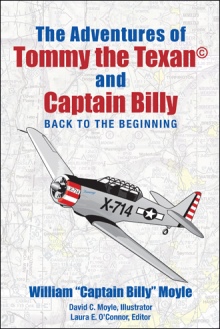 Book one of The Adventures of Tommy the Texan and Captain Billy narrated the story of how Billy’s relationship began with his friend in flight, Tommy the Texan. Their adventures brought them from their meeting in a barn in Arizona to Tommy’s new home in a hangar at a small airport in Danbury, Connecticut. Billy and his crew restored Tommy and prepped him to return to the air.

Book two of the Tommy the Texan series, The Adventures of Tommy the Texan and Captain Billy: A Return to Blue Skies, shares how the bond between Tommy, a T-6 Texan airplane, and Captain Billy keeps growing as he and his crew prepare for Tommy’s first test flight and a return to blue skies. Lois and Tracie, two of Billy’s pilot friends, become new members of the team.

The story follows the team as they get Tommy ready for his test flight and face a challenge that could be a big problem. The crew flies down to Florida to attend a flying formation clinic where Billy hopes to get certified so their adventures can continue.

William “Captain Billy” Moyle started flying at the age of fourteen. Since then, he has nurtured his passion for flying and education, teaching aviation and flying aircraft from an Aeronca Champ to a Douglas DC-8. Now retired, he hopes his juvenile novel series will both inspire and educate today’s youth in aviation and life. This is his second book. Moyle is also the author of The Adventures of Tommy the Texan and Captain Billy: Back to the Beginning.