A Christmas Surprise for Jimmy 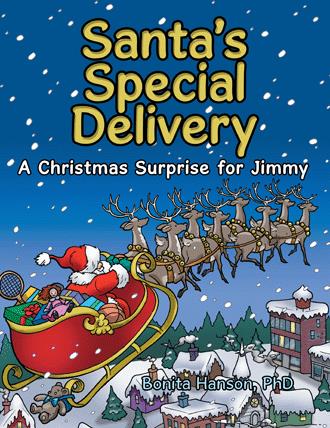 Finally, it was Christmas Eve and time for Santa to begin delivering the toys. As Santa and the elves filled the sleigh with toys, Mrs. Claus served them hot cocoa and sandwiches. "I thought you would be hungry," she said. "And I wanted to see Percy Pika one last time. I'm going to put a little of my special candy in his backpack. I have a feeling Percy will be going to someone special."

Just before they placed Percy on top of the sleigh, Mrs. Claus patted him gently on the head. "Have a safe trip, Percy," she said. And then, noticing that the cold wind seemed to be stronger than usual, she stepped back inside to get an extra lap blanket for Santa. When she returned and tucked the blanket around him she said, "It's very cold and windy tonight. This will help keep you warm."

"Thank you," said Santa. "You take very good care of me." The reindeer pawed the ground, anxious to get underway. The elves gathered to watch just as they did every Christmas eve. Mrs. Claus waved excitedly as Santa called to the reindeer, and off they went.

Just as the sleigh was making its first wide turn toward the south, it was hit by a strong gust of wind which caused it to lurch slightly. "Wow!" said Santa. "That's just like riding a sled downhill and going over a big bump." He laughed at the fun and continued on his journey.

Santa didn't notice that the bump caused Percy Pika to fall backward and slide off the top of the sleigh full of toys. When Percy tumbled backward, his backpack caught on a curved part of the sleigh's runner and he landed upright on the runner blade. There, protected from the wind and bumps, Percy rode for the rest of that Christmas Eve.

Meanwhile near the North Pole scientist Bob Nelson, his wife Susan, and son Jimmy are moving to a new workstation. They start out early hoping to arrive before dark on Christmas Eve. Difficulties cause them to lose their way but soon they see a house lit with holiday lights. They knock on the door and are greeted by a pleasant woman who invites them in to warm up and enjoy some nourishment. She offers to let them spend the night and continue their journey safely the next day.

Jimmy is afraid Santa won't find him when he's not in his new home. But Jimmy is in for a wonderful surprise.

Bonita Hanson, PhD, has long been focused on children's education and their adventures. She brings her experience as a teacher, storyteller, writer, and actor together in her tale of Percy Pika. By introducing a pika to the story, she offers children a look at an animal they may not be familiar with and may want to learn more about. Hanson is an avid reader, enjoys solving cryptograms, and loves to bake. She currently lives in Olathe, Kansas.