A Gift, a Cello, and a Dream 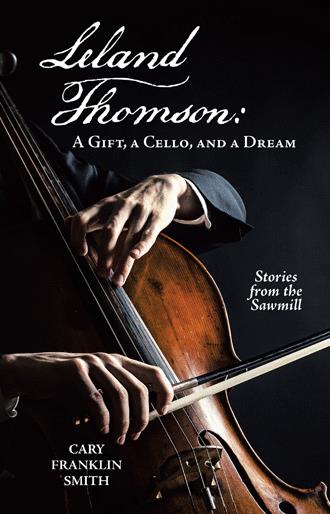 "Mama, is this blood gonna come outa my shirt?"

The year-old boar squealed his final breath as Dearl placed another .22 slug in his head.

"Daddy, why didn't you use the shotgun?" Leland asked. "He'd been dead right then and there."

"Wastes too much meat. He'll be dead soon enough."

Winter was the best time for killing hogs. Seems the chill made them bleed out better before hanging them in the smokehouse. No one really knew why, just the way it had always been done.

Life was challenging in the Ozarks. Oh, you could go to the store in Lathrup Springs, about thirty miles away, but that killed too much of a day, took more gas than you wanted to burn and why go buy groceries when everything you needed could be caught, killed or grown for free?

Manny and Dearl lived in Pine Hollow, Arkansas, with their only son, Leland. Dearl was the foreman over the woodsmen who’d venture into the Ozarks each day to cut and haul logs for Creighton's Mill.

There were very few perks working for a sawmill. As a foreman, though, Dearl and his family got to live free in a company house. Other workers were provided what amounted to cabins they could rent, with the rent taken from their paycheck each month. Though about twice as large as the cabins, the foreman's quarters was still only a small two-bedroom, wood-framed house that Manny kept clean and orderly, no luxuries, just necessities.

In the backyard, Dearl had fenced off a section for Manny's garden. To keep away the diggers and jumpers, he buried one fence below ground level and attached another that raised the height over his head. It was Nubbin's job to scare off birds and any other critters than might try to get in some other way.

Nubbin was Leland's dog. She was a mix of questionable variety. The dominate characteristic was just plain hound, brown with black nose and ears. She used to be Dearl's dog and in those days would go with him into the woods to hunt or work. But one day when she was standing on the seat of his truck, leaning out the window the front tire hit a hole while Dearl was making a sharp turn. Nubbin (called Ruthie at the time) was bounced out the window. All Dearl could grab was her tail, which dislocated about four inches from her rump. After he had cut off the dislocated tail section, she had nothing more to do with him. She transferred her loyalty to Leland, who changed her name to Nubbin because of her nub of a tail.

Life in Pine Hollow was a combination of creativity and good fortune. An old hickory tree near the back door got struck by lightning. To deal with the problem, Dearl flattened the stump and made Manny a chopping block. The rest of the tree became wood for the smoker. Many a chicken had met their end on that stump. Other animals had lost fur, skin, scales or feathers there as well while Manny got them ready to become the evening meal.

It was too small a stump to hoist up a yearling hog onto, so Dearl and Manny teamed up to gut and clean the carcass in the yard where the pig lay. The warm, steaming entrails were piled on a board, waiting for a trip to the woods to feed the night scavengers. The skin and hooves placed in another pile to be buried out by the edge of the woods.

Dearl had no problem manhandling the hog. Though he was of nominal height, He was a strong, big-chested man. He was the type of man you wanted on your side in a scuffle. He'd never to back down in defense of his family, his friends, his company or his sense of propriety. He lived by a code that was fair, yet firm. His men respected him.

He met Manny when he came to work at the mill as a teenager. Manny's father was the foreman before Dearl. As soon as he was hired, Dearl lived in a cabin with two other men but spent most of his free time at the foreman's house. Manny was fourteen when they met and wasn't allowed to be alone with a boy. Dearl didn't mind. It gave him a sense of home he hadn't had in quite some time.

Manny's parents accepted Dearl as a part of their family. In fact, traditionally it was the father who passed his trade on to his sons. With no son of his own, Manny's dad took specific interest in Dearl and taught him the skills and management ability to lead men. When Manny's dad died, Dearl was given the job as foreman over men more seasoned and longer tenured. He had proven his ability and knowledge but had to learn personnel skills to lead men who resented him getting promoted over them. It took a while for that resentment to go away. Some got fired, some got a whipping, but most finally realized Dearl was the best man for the job.

Dearl and Leland hung the skinned and gutted boar in the smokehouse, stoked the fire, threw on some water-soaked hickory chips, then headed into the house.

"Grab a slab of bacon, Leland," Dearl said. "We need to start eating up last year's kill to get ready for when this fellow's done."

Leland took down a hunk of meat. He gave it to his Mom, then washed up for dinner. As was usual after the evening meal, Dearl churned up the embers in the fireplace and watched the embers fly up the chimney. Manny joined the three of them in the living room. Leland took his cello from the corner. He sat it between his legs, closed his eyes and lay his open hands on his legs, then, in a minute took his bow and filled the house with the deep strains of the rich baritone. Leland had the gift.

It’s January 1960. Leland Thomson plays his cello with incredible passion and sensitivity, demonstrating a skill that far outstretches his age and circumstance. The cello came from his uncle, but the gift was from God. Attached to the gift was a dream to play before vast audiences, a dream that seemed well beyond the reach of a sixteen-year-old boy from the hills of Arkansas. Life is a challenge in the hills, even more so if you are sawmill trash. Your lot is cast low and thrusts upon you daily challenges of race, poverty, abuse, and mistrust. Only by strong convictions do the Thomsons manage a simple yet contented lifestyle. On a trip into town, they meet Ralph Watkins, a regent at the New York Conservatory of Music. When Ralph hears Leland play, he outlays a plan to have Leland play at Carnegie Hall. But when Ralph discovers Leland’s practice of praying each time he plays, to honor the source of the gift, Ralph demands he stop, only to realize what he asks separates Leland from that which gives him his identity and ability. Leland Thomson: A Gift, a Cello and a Dream is a captivating story full of country charm and wit. It follows Leland as he fulfills his dream while proving where you come from matters less than who you are.

Cary Franklin Smith pastors a church in the countryside of Southeast Texas. He is a graduate of Howard Payne College and holds a graduate degree in religious education. Smith and his wife, Jan, are parents of three sons--one of whom is a gifted cellist--and grandparents of ten grandchildren.