Dilemmas Facing the United States and Its People

Can We Maintain Our Superpower Status?

by James A. Hudson 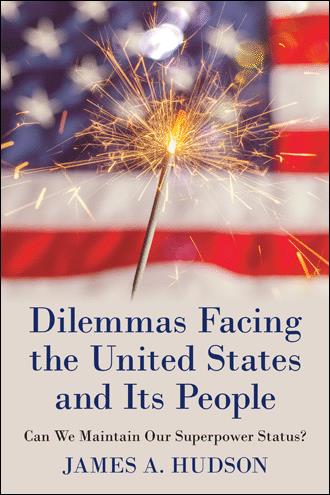 The universe is quite a mysterious place. For those who haven't fully grasped the concept when referencing the universe, we aren't referring to the earth alone. The earth is a tiny planet residing in what is known as the terrestrial sphere. We are also referring to the planets in outer regions of space, including Mars, Saturn, and Venus,etc. These planets reside in the celestial sphere or the heavenly realms. If we understood a fraction of the functioning of the universe, we would be wise and upright in all deportment. We would be cognizant of the higher power behind the smooth functioning and regulating of the universe.
Before we continue, you should understand a minor aspect of the universe as it relates to the dilemmas facing this nation. The universe is not a static place, thing, or entity. The universe is very dynamic. If we could see what is taking place in the ether, we would go crazy. There are many questions regarding the origin of the universe, including where the universe comes from and why we are here. The answers to these and other secrets and mysteries are there. Whatever secrets and mysteries there are to be known will be revealed. Secrets and mysteries that are to be hidden will remain hidden.
In connection with the all-seeing eyes, we may refer to these eyes as God, a universal power, or the Supreme Being. The terminology used to describe these all-seeing eyes makes no difference. However, since we are supposed to be a Christian nation, in the United States, we refer to these eyes or this power as God, the Lord, or the Almighty. This is the deity that people should align themselves with if it is their desire to gain wisdom, knowledge, and understanding.
King Solomon of ancient Israel said, "The fear of the Lord is the beginning of wisdom." That is wisdom in connection with spiritual and divine things.
Someone who fears the Lord, is in good standing with other people, and is just and upright in all deportment is probably on their way to gaining true wisdom. Christians and others who are religiously inclined should possess some degree of wisdom. This is based on the fact that the Lord is the source of true wisdom. Those who fear the Lord and give reference to the Almighty Maker should possess some degree of wisdom, but this is often not the case. In some cases, the opposite is the case. Why?

What Percentage of Americans Believe in a God?

I am convinced that all wrongs and nefarious activities are due to lack of knowledge as it relates to the functioning of the universe and a belief in the existence of a Supreme Being. I don't believe anyone would knowingly forfeit their right to a peaceful, happy, and prosperous existence by intentionally bringing harm to others and themselves. People often engage in evil activities because they aren’t aware of the consequences that will follow. They aren't aware that there is no secret that can be hidden in the universe. Every act is seen and recorded. We will be rewarded for our good deeds and punished for our evil deeds. Christianity emphasizes these things, but many ignorant people fail to do good instead of evil.
Before we continue, you should understand that the influence of distant planets in the far reaches of outer space is profound. They seem to have an effect on all living things on earth. Some people think lunacy is pervasive at the time of the full moon. These things--and more--will be brought to your attention later in this book. In the meantime, let's contemplate the universe and the mind governing the universe.

The universe seems to have a mind of its own. The universe also seems to have eyes and ears; it sees and hears everything. Above all, this universe rewards and punishes us for the things we have done and for the things we failed to do--with no exception. These things apply to mortals and to organizations, cities, towns, states, and nations. Nothing escapes the all-seeing eyes and ears of this universe.
The universe seems to have some sort of memory bank for storing and retrieving all kinds of information. Could this information be stored on distant planets in the celestial sphere of the heavenly bodies? Actions that have taken place since the beginning of time are recorded in universal memory. The universe works, and it delivers. This should be evident in terms of the situations taking place in this country.
Death will not extricate a soul from the good or evil that it committed during life. For the wrongs that one committed during life, one will pay even beyond the grave.
People are being rewarded or punished for their actions, words, and deeds on a daily basis. There is no escape from the eyes and ears of the universe. Sooner or later, people will reap their just rewards or negative karma. These are some of the secrets and mysteries of the universe that humans should be aware of. If this were the case, then the world would be more peaceful. There would be less crime, less violence, less evil, and fewer nefarious activities committed by the human race. We are hoping that that once these secrets and mysteries are revealed, people will heed the warning and govern themselves accordingly.
The dilemmas facing this nation and its people are simply the universal laws at work. Many of you may fail to recognize this, but it's true. Things that happened decades ago that were stored in the memory of the universe have now been revealed or will be revealed. Hidden things are now coming to the light of day and will be coming to light in due time. This is the way of Providence.
Unfortunately, whenever the universe is dispensing retribution, there are those who bring harm to themselves. Nevertheless, the act of hurting oneself will not extricate the soul from its deeds.

The United States and its people currently face numerous dilemmas and troubles, and many around the world believe it to be in decline. As its superpower status comes into question, it's important to take note of the problems plaguing the nation and of the similarities between its path and those of former empires.

In Dilemmas Facing the United States and Its People, author James A. Hudson considers the many factors contributing to the troubles facing the nation and its people and seeks to offer meaningful suggestions for solutions. From natural disasters and man-made calamities to political unrest and strife, the issues and conflicts of the United States require close and careful examination. Only with well-thought-out processes will the American people be able to unite rather than divide and educate the people instead of leaving many in darkness and ignorance. In search of a better future, we should help each person to rise instead of engaging in wanton greed and dishonesty.

This study explores the various problems faced by the United States, describing the causes, effects, and possible solutions that can help build a brighter future for the nation's people.

James Augustus Hudson was born in Kingston, Jamaica. He came to the United State 1980 and became a naturalized American citizen 1990. His early childhood education was in Jamaica, Roxbury College in Massachusetts, and Cal State Fullerton in California. James is an electronics technician by profession. He is a gifted visionary who sees and understands things that many others cannot. His vision allows him to solve many problems and offer solutions to problems in the lives of people and things. This country, the United States, is in trouble. The dilemmas facing this nation and its people are many and varied. As a visionary, he knows it is his duty to bring what is happening to light and offer suggestions for a cure. James is the published author of four books: How to Have a Better Relationship with Your Mate/Spouse; Thou Shall Not Kill: What Providence Has in Store for Those Who Do; The Rising of Black America with the Assistance of White America; and A Message to Black America: Motivating Young Inner-City Black Men to Excellence.