Look Out London, Here We Come! 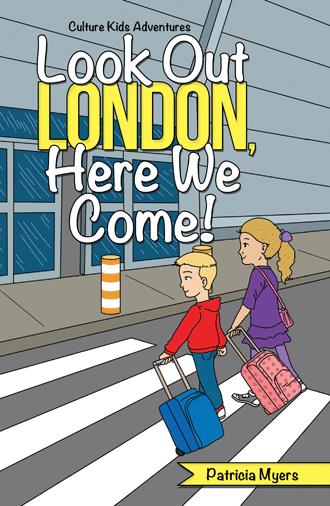 As the morning light seeped through the window, Sienna’s eyes opened wide. No time for sleepyheads! It was Saturday, and soon Nana and Papa would arrive to take Sienna and her brother, Beckett, on their big adventure across the ocean…

Sienna closed her eyes and imagined herself up, up in the clouds, gliding for thousands of miles. She pictured herself stepping off the plane onto the tiny island that she had stared at on her wall map since Christmas. England, the country the Pilgrims came from. England, the country where our first US presidents came from.
“London, England, here I come. Ready or not,” she whispered to herself.
Nana told them so many things about London: Buckingham Palace, London Bridge, and the strange stones at Stonehenge.
For three months they had memorized the names of places they were going to visit. But Sienna still had butterflies in her stomach. If only she didn’t have to fly three thousand miles over the Atlantic Ocean to get there. Her worried thoughts were interrupted by her little brother.
Beckett was already asking the same questions he had asked a million times. “Do you think we’ll be able to go to a Manchester United soccer game? Are you sure London Bridge isn’t going to fall down again?”
Sienna tried to take her mind off the long flight. “I just want to see the queen. Or at least see a real princess. That’s all I really care about.”
Nana laughed. “You never know. I’ve been there many times, and I’ve never been lucky enough to see Queen Elizabeth. But there are so many other wonderful things to see that it won’t matter if we miss one thing on your wish list. One of my favorite things is enjoying a proper afternoon tea.”
Papa had his own wish. “I’m still looking for the best fish and chips in London. Maybe I’ll find them this trip.”
Finally, they stood at the check-in desk of British Air…

Trains packed with passengers came and went. It looked like people from every corner of the world were going to other corners of the world. Men in white robes that looked like pajamas read newspapers. Women with scarves covering their heads pushed strollers. Children with brightly colored shirts that matched their hats ate ice cream cones, and a group of teenagers with purple hair sang and played a flute, drum, and tambourine.
“Wow,” Beckett exclaimed. “I feel like I’m walking around a globe!”
“That’s a very creative thought,” Nana answered. “We’re just four sets of feet traveling around this great big busy world.”
This was not at all what the children thought Londoners would look like…

Just then, they felt the train they were riding slow down and they heard the announcement. The loudspeaker blared, “Arriving at Salisbury Station- home of Stonehenge.”
Sienna didn’t see any huge rocks around. It looked like a quaint little village with shops and places to eat. There were lots of souvenirs, so she figured they were close to Stonehenge. Papa told them that Stonehenge was the oldest construction in England. Archeologists thought it could be five thousand years old.
“How many stories high is it?” Beckett asked. He was becoming more interested because he loved buildings.
Papa laughed. “Oh no, it’s not a building. It’s just huge rocks. Some of them are on top of each other, all arranged in a circle.”
Sienna scrunched her nose. “What’s the big deal about that? I could put stones on top of each other in a circle!”
“Not if they weighed tons and tons,” Nana reminded her. “Look over there. That’s Stonehenge right in front of us.”
As they got closer, Sienna realized her bragging was pretty silly. The sign said the huge stones were thirteen feet high and seventeen feet wide. And yes, the rocks weighed more than twenty-five tons—that’s fifty thousand pounds!
“Well, that doesn’t look so hard to me,” Beckett said, as he stared at the simple circle of stones. “A good construction crane could do that with no problem.”
“Is that so?” Grandpa teased. “So, when do you think cranes and pulleys were invented?” Beckett and Sienna didn’t have a clue. “Let me tell you. They were invented hundreds of years after these rocks were placed here.”
Sienna listened carefully as she stared at the gigantic stones. She couldn’t even imagine what five thousand years were and who the people were who built Stonehenge. “Hmm. So how do you know when these rocks were really put here, Papa? Especially since it was so long ago?”
Papa was looking at the information booklet about Stonehenge and read from a page. “Scientists now have a way of figuring out the age of almost anything on earth. They use a process called carbon testing. And these tests tell them the age of the rocks. They also found five thousand-year-old bones inside the circle. So Stonehenge might have been used as a cemetery.”
What seemed like a boring trip to see rocks became much more interesting! They walked under the arches made of stones—five thousand years ago! They sat on the grass to listen to a young man explain more about this strange place.

Sienna and Beckett are very excited! They’re getting ready to go with their grandparents on a fun and educational trip from their home in Dallas, Texas, to London. They aren’t quite sure what to expect, although they know it will be interesting and fun.

When Sienna, Beckett, Nana, and Papa arrive, the children learn that England is very different from America. But they also realize that many of the people they meet are just like them. Sienna and Beckett each have something they’d most like to do, from dreaming of meeting a real princess to visiting a zoo that helps keep animals from becoming extinct. In addition to their wish list, Nana and Papa want the children to learn about things they can’t see at home. At first, the children think this might be boring—but wait and see if they change their minds! Sienna and Beckett soon find out that traveling is a great way to learn about the world with their own eyes.

This children’s story seeks to help children begin their worldwide imaginary journeys and build a love of travel as they see what is special about each country around the globe.

Patricia Myers worked in banking, telecommunications, and corporate relations for a Fortune 50 company, writing award-winning annual reports and speeches. She has traveled to forty countries, living and working abroad for a decade. Following those experiences, she began researching countries to share stories with her grandchildren, allowing them to learn about many wonderful places. She currently lives in Dallas, Texas.

For more information about this book, email the author at:
culturekidstx@gmail.com