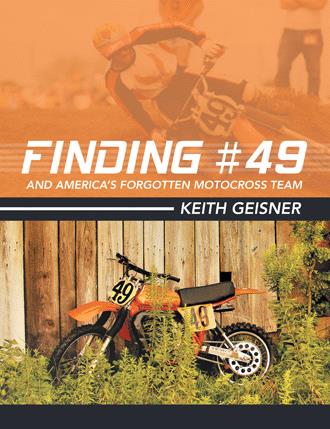 When I initially contacted John Ingham with all my questions, his reaction was somewhat the same as Don’s: “It was forty years ago…hard to remember….” John gave me his email and I sent him some photos of the bike. He readily responded and said that it was definitely a team bike, but that he couldn’t place it. He said the bike was a model from the later years of the team’s heyday, and that the exhaust was also from that era. The clutch basket with the safety-wired snap ring was not familiar, but then again, he said, “Marty Tripes was pretty hard on clutches.” John also told me they had made a few different sets of triple clamps and that Don “Killer” Kudalski had crashed in Florida due to a broken triple clamp. All of this information gave me great hope that I could find out more about #49 and its history—and, thanks to John, I found another bread crumb on the trail in the form of former team manager Clyde Denzer.

Clyde couldn’t offer me much information, but he always encouraged me and passed along my queries to anyone involved with the MX team or its history. He always re-sponded to my emails and was courteous and supportive. I was grateful and, though I thought I had hit a bit of a dead end, I was about to get an assist from another source.

In my conversations with Don Habermehl, he had also mentioned a former team engineer named Rex Marsee. I searched Facebook and finally got in contact with a nephew, who gave me Rex’s phone number. Rex was delighted to talk with me about my recent acquisition.

Rex’s work with the Harley-Davidson MX team was early in the development of the 1975 MX250. He also helped design the production MX bikes that H-D sold in 1975. When I asked Rex about the serial number on my frame, he came back with the first real answer that made sense: it was a date and sequence number, “D878” meaning “Date August 1978” and “40” being the sequence of the frame. Rex said it was only a guess of course, and by the time Kudalski was racing, Rex would have no longer been with the company. Still, I knew roughly how many frames Jeff Cole had designed, and I was getting closer and closer to an answer.

Rex was first discovered by Harley-Davidson after he designed and built his own motorcycle that was featured in a September 1974 edition of Cycle News. The bike was built ahead of its time, so much so that over a decade later Buell and Victory would have a similar design. The bike was called the Marsee Magnum and Rex said that article had kicked off his motorcycle career. After leaving Harley-Davidson, Rex went on to start his own line of motorcycle riding gear and luggage. Rex’s roots run deep in the industry, and I was excited to make his acquaintance. At the time I met him, he was in the process of writing his auto-biography.

Valentino Rossi once said, “To be a great motorbike racer, the most important thing is passion for the bike.” Vintage motocross enthusiast Keith Geisner has this passion, and it leads him on a journey of discovery when he finds an old Harley-Davidson dirt bike for sale online. A mere moment’s pause on a photograph, and Keith becomes both restorationist and researcher of a piece of American motocross history. Through social media, emails, phone calls and sheer tenacity, Keith uncovers the bike’s unique history. His extensive research led him to motocross legends and Bill Davidson, the great-grandson of Harley-Davidson Motorcycle Co. founder William Davidson. His story is a detective novel for motorcycle enthusiasts where every page, like an enduro, is full of twists and turns.

I like to refer to the author as “Detective Geisner.” His tireless efforts to unearth historical details about the Harley-Davidson motocross project have no bounds and his enthusiasm for the subject borders on obsession. He has traveled extensively to meet and interview the riders, mechanics, and engineers who were involved. His “investigations” have turned up details about the MX project that were sometimes unknown even to those of us who worked on the H-D Factory team in those days. So, it’s fair and correct to say that this book is the definitive study of Harley-Davidson’s controversial participation in American motocross.

Keith Geisner is an avid motorcyclist who has owned hundreds of motorcycles and ridden thousands of miles on backroads, trails, tracks, and highways across the United States. He enjoys sharing his incredible first-hand encounters with some of the industry’s most influential and recognizable names. An engineer with more than two decades of experience in the automotive and aerospace industries, he uncovers the true story behind an all-but-forgotten piece of American motocross history in this book.