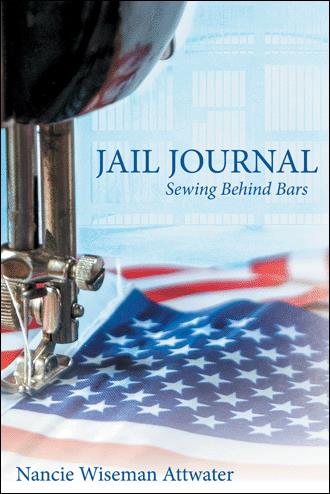 Jail Journal, Sewing Behind Bars is a story of sewing, but it is also the story of the women who lived in the jail, their court cases, the drugs they used, the crimes they committed, and their lives outside of jail. Whether it was an inmate on an ICE hold, or someone in jail for a drug charge, all had something to contribute to the sewing class.

You’ll meet "my girls"—gang members, murderers, shoplifters, burglars, robbers, car thieves, pedophiles, ICE detainees, and prostitutes. These are the women I taught to sew in a county jail for eight years. It is a world of crimes, drugs, and poverty that few adults ever see. The stories of survival are extraordinary: either living on the streets with a drug habit or living and working in the United States without legal documentation. These lives matter, the girls need to be heard. They are not trash or worthless, they are human beings.

Listen to the voices of these women incarcerated in a county jail. Young and vibrant women who are facing prison or deportation and a sad ending to an otherwise vibrant life. Tragedy, despair and hardship, were often relieved for a short time with a hug from me and a lesson at the sewing machine.

Many of the stories are heartbreaking, but there were also happy endings for some who left for a new life outside of jail. However, the return rate, known as recidivism, is high and many would return through what seemed like a revolving door.

Sewing has been proven to be a “wonder drug” of sorts for mental health and stress as well as a mood-regulator. Sewing enhances self-esteem and the rhythm of it encourages calmness. My lifetime of sewing and needlework has been a passion that has served me well for over sixty years. I wanted to share this with the girls at the jail in hopes they would find peace of mind when picking up fabric and thread.

This is a story of sewing, but it is also the story of the female inmates that Nancie Wiseman Attwater taught at a county jail.

She went to the jail to teach sewing, but she learned patience, understanding, and acceptance. She also ended up helping inmates learn manners, language, math, English, and geography – often without even realizing it.

While teaching, she met women who became “her girls” – gang members, murderers, shoplifters, burglars, robbers, car thieves, pedophiles, Immigration detainees and prostitutes. She taught inmates over eight years in an environment that most people never see.

During that time, she heard incredible stories of survival from women who lived on the streets, found work without legal documentation, or battled a drug habit. She became more convinced than ever that their lives matter, and their stories need to be heard.

Join young and vibrant women as they learn valuable lessons by connecting with the author and spending time at the sewing machine.

Nancie Wiseman Attwater is a nationally-known needlework teacher and author of twelve books on knitting, crochet, and quilting. She taught sewing for eight years to the women in a county jail. Her unique gift of sharing herself with her students while she teaches the joy of sewing and needle arts brought many joyful days to the women in an otherwise dreary jail situation. A former registered nurse, she also offers a perspective on the drugs many of the women used and their related problems.