THE PURSUIT OF WISDOM 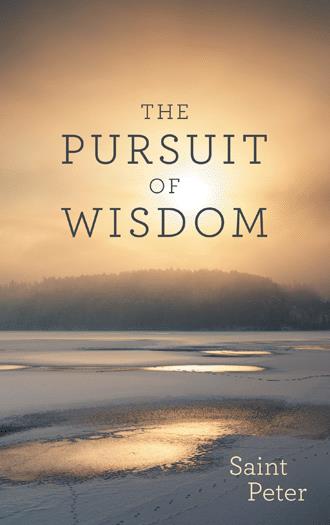 Today, I recalled an old man I had encountered when I was a youth. Pomponous, this encounter brought clarity and better direction to my life. It became all too clear that I had found an easy remedy to mitigate my numerous wanderings. Meeting with this old man from the west enabled me to attain freedom from the many distractions that clamored about my life.

As I walked with the old man, he held his arms behind him. His shoulders were firm, and his posture was like that of a soldier’s. He held his head up like a victorious warrior. His eyes were fixed on the pathway as he shared his life lessons with me. In the midst of my confusion and doubt, I suddenly became open and attentive like a servant receiving instructions from his master.

As I tried to adapt my mind to the moment, the old man gazed at me. From the expression on his face, I could tell the kind of seasoned man he was. He did not say a word as we both continued to walk. I gave him my undivided attention. Then I noticed that the more we walked, the less people we saw. Because I had spent time around crowds of people adapting to their views and opinions, I suddenly became a little uneasy. Pomponous, you know that kind of a feeling. It’s like having a sharp pain low in your stomach. However, being the man I was, I kept quiet and endured while we walked.

Then the sight of a beautiful sunset came forth, and the old man immediately noticed it. He came close to me and pointed east. As he smiled, he spoke to me. Like darts, they have stuck in my mind. He said, “O heavens, I make not much of a request. I just hope this day is good.” I had thought that he might have asked to be reborn as a youth with great renown and fortune, for I would have made such a request if I had been his contemporary.

I thought about this for some time and then told it to him. I also asked why he had made such a simple request. The old man smiled at me and said nothing as we walked past a few old houses with beautiful gardens. While we walked, I noticed the old man’s footsteps. I can’t describe it better than being like a soldier marching on a mission. I was baffled at his gait, for he was old, but his steps were fast and purposeful. I did my very best to keep pace with him.

Trying not to be too forward but having contemplated this thought long in my mind, I finally asked him where we were going, or rather, where he was taking me. He smiled and replied that he was taking me to the mountainside. So I kept walking with him. Every once in a while, I tried to engage him in conversation, but he said nothing and looked at me with a smile.

We passed by a marketplace. As usual, my ears were beguiled by the noise of the people, and I could not stay focused, for I was steadily distracted by the activities going on in the marketplace. With all of this going on accompanied by how I felt, I almost lost touch with the old man. I don’t think I even knew what was happening, but he knew and reached out, grabbed my hand, and held it. He led me toward the mountainside.

Along the way, I began to feel thirsty, for my body had absorbed the hot sun of the day. To rehydrate myself, I reached for the bag on my right shoulder, opened it, and brought out a jar filled with water. I drank half of it and then placed it back into the bag. Earlier, we had stopped to take some rest. The old man had rested but had not drunk much.

After being refreshed, and before we continued on the pathway to the mountainside, he said, “My son, focus is the key and the way to attain all things.” Then we began to walk again. In my mind, I was trying to make room for his virtuous words, but I could not grasp their meaning because they were so deep. Trying not to force my mind, I had to let the thought pass away.

I continued on the pathway to the mountainside. At this time, the sun was almost down. Noticing this brought some relief to my mind, for my body had been crudely beaten by it. I could not withhold my inner joy, and a smile suddenly appeared on my face. Feeling this way, I had to look at the old man. He was smiling also, but I don’t think it was for the same reason. He had been smiling ever since we started the journey. Being aware that I was looking at him, the old man reduced his pace and walked more slowly beside me. At that moment, I felt peace inside me. I felt like I was home.

Pomponous, I told you that when we started the journey, I saw less people as we went along. Now it was just me and the old man who were on the path to the mountainside.

If you are searching for personal freedom and happiness, then get ready to move closer to your desired destination.

Written as a series of letters with anecdotes and life lessons, this book reveals truths such as:

• Love is the greatest power in the universe and a gift from nature to humanity—it is a language that the blind can understand, the deaf can feel, and the whole world can recognize.

• Quitting is never a good option. Too many lose their belief after hitting the first roadblock on the way to achievement. We need to find strength of purpose again if we are to achieve anything that is worthwhile in life.

• No one is as wretched as the person who despairs of the present, is troubled by the past, and is anxious about the future. True wealth lies in each day. Find it while you are still here.

Filled with insights and inspirational messages from the Bible and thinkers such as Seneca, Lao Tzu, and Mother Teresa, this book won’t just bring you comfort—it will provide you with a purposeful direction as you seek wisdom.