A Young Woman on the Edge of Living and Dying 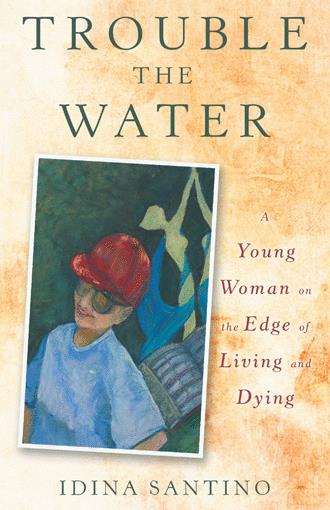 Minutes are longer in the dark, and the longer I sat, the darker it seemed to be. Jada's shoulder rose evenly, and I felt her warm breath on my wrist. My own breath came quickly as I anticipated the scurry to my car, the ride home. I tugged my hand away, at first feeling a reflexive resistance, then sliding it from under hers. Slowly I rose from the bed, hearing the crackle of a protected mattress.

I tiptoed to the plastic bag, packed and ready to go, its cotton drawstrings drooping along the side like unused lariats. Noise is noisier in the dark, too. The slick plastic brushed against my jeans and bumped the door as I opened it. I listened for Jada to call me back, waited a second outside her door in case, maybe hoping, she changed her mind. Then I crossed the hall to the stairwell and, through the dark empty lobby, I swung the bag, twirling and twisting its cord around my wrist until it burned.

Home, I tiptoed into Dom's room and kissed his head through thick dark hair and slipped into bed without the sense of luxuriousness I had expected. Arnold sputtered beside me, while I lay stifflegged, looking upwards at the ceiling. The next thing I knew, I was driving to the hospital to be there when Jada woke up. Or maybe just to be there; I felt strangely out of place at home.

My call to Dom made, the morning yawned lazily, stretching its paws out before curling up in a feather pillow. We had more diabetes education, this time with a nutritionist who told us about carbohydrates, measurements, and all the no-no's ahead. When we returned to Jada's room, her lunch waited obstinately on the two arms of the chair like a bill collector for Jada to pay up. She refused to open the lid.

"Jada, you have to eat or you'll get that funny feeling again."

"If you're going to die, shouldn't it be over something more important than a vegetable? Let me pick something out for you." I lifted the lid, and sure enough, crumpled like a dog's chewed rawhide that'd been left in the dirt was a mangle of sliced roast beef; and the mixed peas and carrots that were there yesterday were there again today, boiled and blanched of color. Jada might have eaten corn; too much starch was not allowed. The censors substituted peas and carrots. I grabbed the waxed carton of milk. "At least drink your milk while it's still cold."

"Why are you doing that?" Jada's voice shrilled, and she whipped back the layers of blankets from her bed and surged from it, the power of her anger like spinach to Popeyes's bulging arms revving up to blast Bluto out of this world. "I'm not eating and you're not giving me any shots, either! I'll kill myself!" Then, grabbing the corner of the sheet with Miss Piggy in her voluptuous dress, Jada pulled it and wound it around her neck, falling backwards, all of Miss Piggy's buxom weight pressing against her throat. With her hands tugging the sheet crisscrossed at her neck, her head wobbling about the bed as if it were trying to squeeze itself out, she seethed. "I hate this! I'd rather be dead!"

She released her hold and shot up, her hair matted, crowning a face filled with color she hadn't had in months. She sprang to the bathroom, and like a punch to the midsection, slammed shut the door. I heard the lock catch. "Just try and make me!"

"Jada, I know you're angry. And you must feel helpless, too," I said to the gray metal as a troupe of people, Dr. Malley in the lead, stopped beside the entrance to the room.

"Get away from here! I don't want you here!" she shouted through the barrier. Dr. Malley continued to address the band that crowded in front of Jada's room, and as her lips moved, her eyes swept past mine. Jada cried out, "This is all a bunch of shit! I won't do it and you can't make me. Why can't I just die? Just get out of here and leave me alone!" I turned from Dr. Malley to the door and back again. Dr. Malley's speech hesitated, she shrugged, a look of disapproval sliding down her long bony nose, and netted her entourage to amble down the hall.

Dr. Malley could have provided a fencepost along the path I stumbled over in the dark, but she was cold, aloof, without even a spark of compassion when I needed a flicker. Maybe that was what Arnold liked about her, that pellet in her eyeball that always struck the fault of things. She, my mother, and my husband. It was the inside out of pleasing that linked them. Jada, overwound with emotion, a wind-up doll dialed to spin around and perform tricks, was put into atoy box, her unspent energy pulsing, coiled up, with no way to release it, except on me. Jada was a difficult patient, and me? I was the cause of her difficulty. After all, we had a family disease.

I sat down on the only chair in the room, listening for danger signals from the bathroom. As time passed, I heard clicks, first the unlocking, then the unlatching, and then Jada emerged, thin blue lines radiating from her eyes as if they were electric currents engraved in her chalky white skin. I tried not to notice that her cheeks were beginning to hug her jaws like she had a sour ball stuck on the back of her tongue, and it was sucking the rest of her in.

Fevers and aches were not unusual for twelve-year-old Jada Petersen. Since she was involved in several activities and sometimes fell during ice skating practice, the fatigue and bruises didn't raise alarms either. Routines and expectations changed abruptly, however, as her initiation into leukemia gradually transformed her life. Growing from a willful adolescent into womanhood is often awkward; yet, as Jada balanced on the edge of life and death, she converted endurance into empowerment. Trouble the Water shines light on Jada's mission to strengthen her voice, command attention, and exert power in an environment that benevolently mutes individuality. Wherever readers are in the journey to claim their power, they will find parts of themselves in Jada's story. Brimming with grace, she became the woman she was meant to be.

Idina Santino grew up, taught, and mothered two children in Minnesota before moving with her long-time partner, to Tucson, Arizona, where she grandmothers, volunteers, and hikes the desert. As an educator, she has published professionally.