by Joseph B. Walker 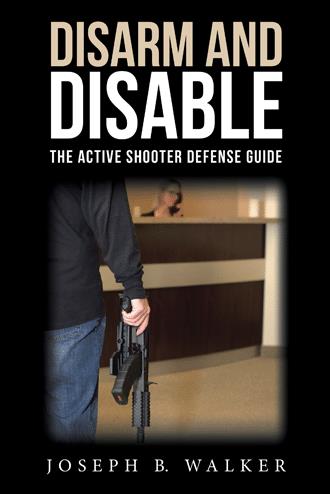 Active shootings can take a few seconds or last a protracted period of time. Most active shooters seldom use entirely new tactics, but rely on using the tactics from prior cases. The techniques and tactics in this guide utilize my training in the Martial Arts and law enforcement experiences over my career and beyond. It is imperative for those who wish to survive and active shooting to look at potentially dangerous situations and see the reality of the threat, consider the plausible resolutions and then quickly implement the best strategies or tactics to overcome the threat. This publication is meant as a companion to my book “Shots Fired: Surviving an Active Shooter/Assailant.” “Disarm and Disable” is not only a philosophy, but a strategy in dealing with any active shooter. The defender (whether armed or unarmed) should immediately recognize the deadly threat whenever shots are fired or an active shooter appears, and take the required steps to either escape from the immediate area, or if escape is not possible and when/if the opportunity arises to ambush the shooter, disarm and disable him/her expeditiously saving their own life and possibly the lives of others.

This guide has three main purposes: to provide some of the essential material addressed in my previous book; to highlight some of the most significant Active shooting cases that have transpired since the initial book was published; and to offer enhanced tactics and techniques to counterattack active shooters. I have also provided applicable photographs to bring clarity to the various positional firearm disarming and ambush strategies and techniques.

Most trainers who teach active shooter defense refer to run, hide, fight but will intentionally gloss over the “fight” portion and provide little to no specific detail. If anything is mentioned, it is usually stated that victims should pick up a heavy object and throw it towards the person armed with a handgun, long gun, or edged weapon.

Since my initial publication, Shots Fired, was released, I have conducted numerous training courses and have met many people who were mandated to attend their company active shooter defense training classes taught by some other entity. Virtually all attendees from training classes provided by other vendors have yet to report that they were never taught how to properly ambush the shooters or properly disarm the shooters of their weapons.

Rather than parrot the phrase run, hide, fight, I now use the concept of run, hide, ambush! I teach students in my classes what law enforcement officers would do if they were in a similar situation whether armed or unarmed. Officers would not hide under furniture or inside a closet. We would decide on a physical course of action to ambush the shooter to disarm and disable him/her when the situation presents itself.

Quite a number of active shooters are armed with more than one weapon which could be a threat to your life and possibly the lives of others. Therefore, merely disarming the active shooter of the firearm they are using may not be sufficient to stop the shooter’s rampage. Should the shooter charge or attempt to physically retrieve their firearm, or reach for a second deadly weapon, you may need to use deadly force and shoot the person with his/her own firearm. If you are legally carrying a concealed handgun, you may elect to use your handgun rather than the shooter’s firearm. Besides, you know your handgun is operational 100 percent of the time. If there is more than one defender, the second defender may place the disarmed shooter into a carotid control hold where the shooter would be rendered unconscious, thereby disabling the shooter.

In a perfect world, no one would indiscriminately use a firearm to shoot and kill any number of innocent people – and if they tried, law enforcement would be there to stop the killer.

But we live in an imperfect world where attackers normally target unsuspecting victims. Trained professionals are seldom there to fight back.

When seconds count, it’s imperative for everyday citizens to learn how to disarm and disable attackers. In this guide, learn how to:

• Take evasive and life-saving measures from sniper fire;
• Avoid the sixteen deadly errors of active shooter defense training;
• Utilize tactics and techniques to maximize your chances of survival during an active shooting;
• Ambush, disarm and disable the shooter should you come face to face.

This guide was created for the worst-case scenarios if you were to find yourself in the wrong place at the wrong time – and no trained professionals are there to help.

While escaping a kill zone is one option, there may come a time when the best way to protect yourself and your loved ones is to ambush, Disarm and Disable the shooter.

Joseph B. Walker provides tactical and technical information on responding to threats, such as active shooters, stalkers, and assailants through a variety of courses for civilians and law enforcement. He uses his expertise as a retired police lieutenant and a tenth-degree black belt in martial arts with two world karate champions to formulate tactics and techniques that can defeat armed and unarmed assailants. He is also the author of Shots Fired: Surviving an Active Shooter/Assailant.